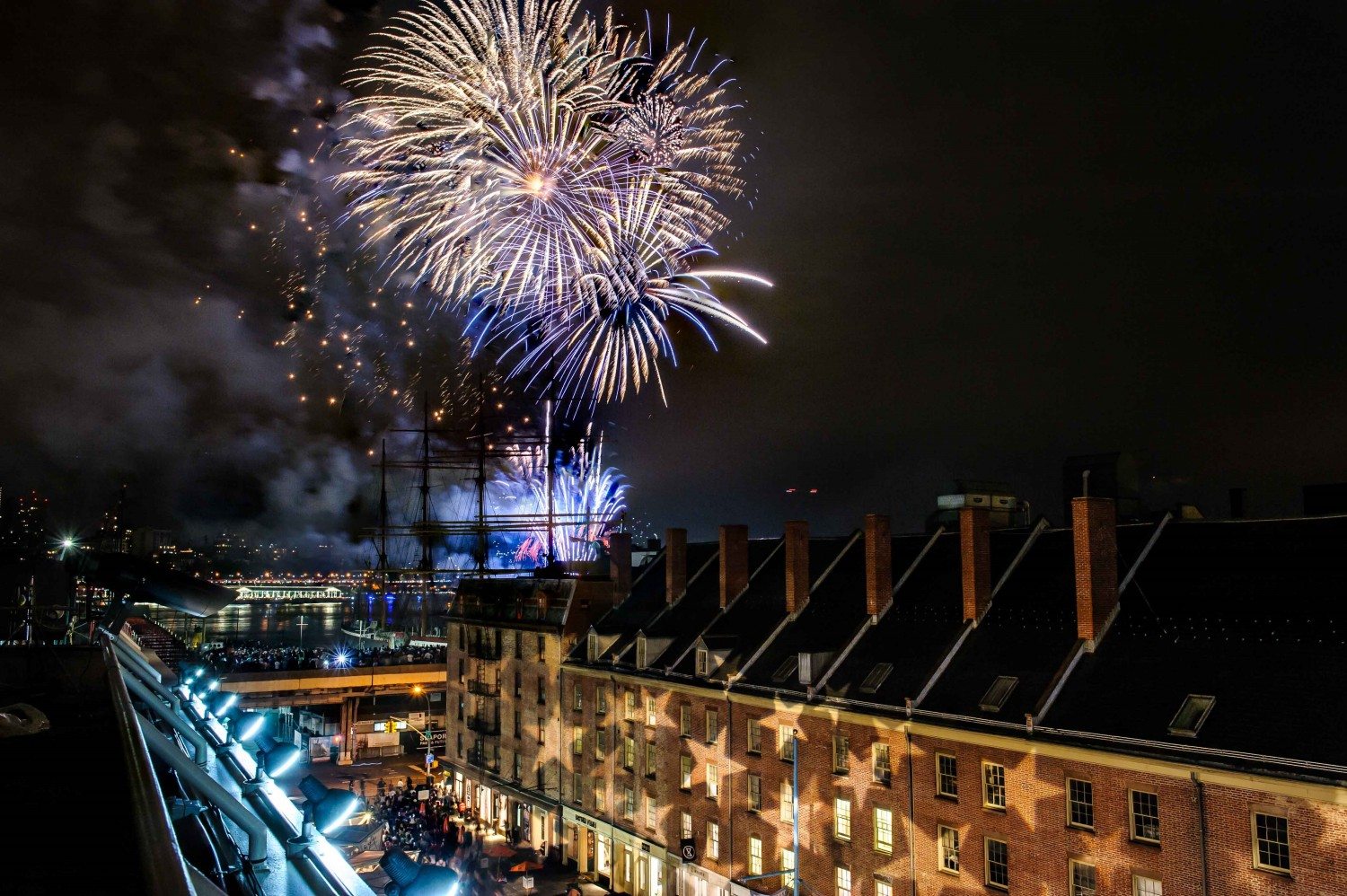 Still looking for something to do for Monday, Jul. 4? One of your options to consider ought to be what’s being offered at South Street Seaport. As organized by the Howard Hughes Corporation, the Seaport District will be presenting its Festival Of Independence. The two-day celebration — which launches one day earlier on Jul. 3 — is presented in partnership with Noisey, the music and culture channel of VICE. Beyond performances by Porches, D.R.A.M. and Phony PPL, there will also be a second stage with incredible family-friendly performances from Clifford The Big Red Dog & Friends and the Marcus Monroe Juggling Show.

Phillip St. Pierre, Senior General Manager of South Street Seaport, spoke to Downtown about the Festival Of Independence and plenty more. Less than a week later, the same site will be hosting the 4Knots Music Festival, as presented by The Village Voice on Jul. 9, as featuring headliner Guided By Voices. IMPACT! and the recurring Fulton Stall Market are also on the docket for the Howard Hughes Corporation.

For more info on the Seaport, click on over to www.southstreetseaport.com. The legendary downtown destination can also be followed on Twitter via @TheSeaport.

How would you describe this event to someone thinking of attending?

Phillip St. Pierre: The Fourth of July is all about family, friends, and community. The Festival Of Independence is all about celebrating that sense of community and independent spirit.

This two-day concert series on the historic streets of the Seaport District includes a lineup of independent artists hand-selected by Noisey, VICE’s music and culture channel — the performances won’t be Noisey, they’ll be melodious! Artists including Wild Nothing, Porches, D.R.A.M and a Jonathan Toubin DJ set will perform on a dedicated stage on Fulton Street.

There will also be top-tier children’s performers all afternoon on July 4th. Acts include the Marcus Monroe Juggling Show and Tim and the Space Cadets, a Brooklyn entertainer and host of the only live morning show for preschoolers, Sunny Side Up.

All of this excitement and activity culminates with the Macy’s 2016 Fireworks Show over the East River. There is no better vantage point than up on the FDR at Pier 17 — that’s right, the city is closing down the FDR so you can walk right on up and see the show unobstructed — to watch this amazing display!

Is there a particular activity or part of the festival that you’re looking forward to most?

PSP: The Seaport District is a vibrant community, and The Howard Hughes Corporation is particularly excited about activities geared towards some of the neighborhood’s youngest residents. Lower Manhattan’s population under 18 is booming, and we are constantly looking for new ways to engage kids and their families through interactive programming and events. We know that Clifford The Big Red Dog live on The Peck Slip Stage is going to be a huge hit.

How did the opportunity to collaborate with VICE on this festival come about?

PSP: VICE’s Noisey is an expert at curating lineups of top-performers across a range of genres. We were very excited about their work, and we recognized that they could be a tremendous asset to the festival. They were also thrilled to be a part of the revitalization of the Seaport District, and play a role in making the neighborhood a place where all New Yorkers could congregate and listen to amazing acts.

South Street Seaport took a long time to rebuild from Hurricane Sandy. For someone that hasn’t been gone there in a while, what has changed recently?

PSP: There have been tremendous changes to the Seaport District since Hurricane Sandy. The neighborhood feels incredibly vibrant with the worst days of recovery far behind us. The Howard Hughes Corporation is committed to revitalizing the neighborhood into one of the top entertainment and cultural destinations in New York City.

In recent months, we’ve announced plans for new restaurants from legendary chefs David Chang and Jean-Georges Vongerichten, as well as the upcoming opening of iPic Theaters. This summer, Smorgasburg, everyone’s favorite food festival, has returned to the Seaport. We welcome all New Yorkers to come and experience the Seaport’s dynamic attractions first-hand this summer.

After this festival has wrapped, are there any future events at the Seaport happening that you can talk about?
Right now we are hosting the annual Seaport Culture District, the acclaimed arts initiative that brings cultural partners to the Seaport. As part of the Culture District, we’ve brought an ongoing design exhibit called IMPACT! which showcases projects from students at Parsons School of Design and explores the ways in which designers, artists, scholars and technologists come together to push the limits of creativity IMPACT! will be open for extended hours during the Festival Of Independence.

And on July 9th, music lovers should check out The 4Knots Musical Festival, sponsored by The Howard Hughes Corporation and The Village Voice. Like The Festival Of Independence, this event includes an incredible music line-up with bands like Girlpool, Guided By Voices and Car Seat Headrest. It’s going to be a memorable event.

What about events being produced by the Howard Hughes Corporation?

PSP: Every Sunday afternoon, The Howard Hughes Corporation hosts the weekly Fulton Stall Market, a farmer’s market that brings local food producers down to the Seaport to share their goods with the Lower Manhattan community. It’s a great way for people to connect with the farmers and food producers that are at the forefront of the farm-to-table movement.

PSP: I love to ride. You will find me most weekends out in rural New York amongst our Fulton Stall Market friends riding my Harley. It’s where I can unwind and recharge. I am actually making the big trip later this summer, riding from the Brooklyn Bridge to the Golden Gate — 17 states in 16 days. I am really looking forward to it.

Finally, Phillip, any last words for the kids?

PSP: The Seaport District is great to visit all year-round, but it’s especially wonderful in the summer. We encourage everyone, and especially kids and families, to come to the neighborhood and experience firsthand what all the buzz is about.