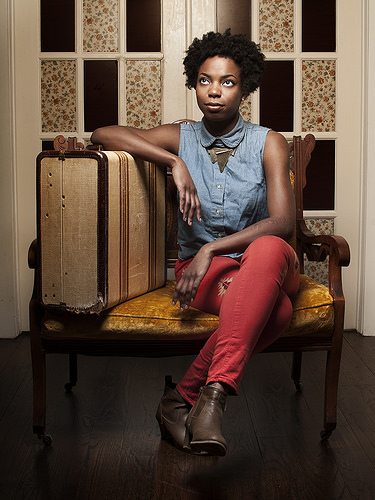 As with much of the current Saturday Night Live cast, Sasheer Zamata has roots in the sketch comedy world. She not only performed with the Upright Citizens Brigade prior to joining SNL, but was also part of sketches on FX’s Totally Biased With W. Kamau Bell, The Cooking Channel’s Fodder, MTV’s Hey Girl and College Humor. Beyond all of that, she had a web series with Nicole Byer called Pursuit of Sexiness, which may be coming back soon.

When not busy with Saturday Night Live, Sasheer does a lot of stand-up gigs. One such appearance is Saturday, August 29th at The Knitting Factory, as part of this year’s Brooklyn Comedy Festival. During our phone chat – as arranged by the lovely folks at NBC – Sasheer was able to explain the concept of her stand-up comedy in one simple word. Beyond that, she kindly took some questions about her leaner years as a new resident of New York City. Altogether, she came across as someone who worked hard to get where she is, who also has no plans of slowing down anytime soon.

For someone who hasn’t seen you do stand-up before, how would you describe your show?

That makes a lot of sense. Something to me that’s very interesting about you is Saturday Night Live is probably the fourth or fifth sketch show you’ve been a part of. You did stuff on Fodder, Kamal Bell’s show, and with College Humor and all that. Is that something that ever came up when you were auditioning for the show?

S: Not really. SNL is concerned with SNL and to them, they’re the premiere sketch show, so they weren’t asking me any questions about other stuff that I’ve done.

A lot of people who do sketch comedy are a lot more about improv than written material, but you seem to do both. Is there anything that you attribute to the fact that you can do stand-up, improv and regular sketch?

S: They’re all different skill sets, but they complement each other in different ways. It’s fun to improvise on-stage when I’m doing stand-up on-stage and being able to talk to the audience or riff on something that’s a good idea that’s spiraling in a good direction. I haven’t seen how sketch or stand-up have really bled into improv, because you’re just creating on the spot, but they do kind of influence each other.

Before you got on SNL, did you have a day job? I know you had a few years in New York before you big break happened here.

S: Yeah, I had a lot of odd jobs that were terrible (laughs). Some were fine. I mostly worked in clothing stores. I worked at a lingerie shop…a vintage store… I worked a very fancy boutique where everything was organically made, a lot of very affluent ladies would come and buy clothes there when they weren’t summering somewhere else. But I also worked for promotions and packed up t-shirts for different companies and flyers for things. A lot of different small jobs, it wasn’t until 2011 or so when I was able to sustain myself on entertainment ventures, which was really nice. I would audition for commercials and book a few, hopefully get paid for stand-up and writing gigs here and there. It eventually got to a point where I could sustain myself on comedy, which was nice.

With the idea of moving to New York, was that rooted in the idea of pursuing entertainment? Or you just wanted to be in New York?

S: I think the driving force of it was to be in New York but I also wanted to perform. I majored in drama and thought I wanted to pursue a theater career when I got to New York. I was auditioning for off-Broadway shows, trying to get my Equity card, but that was a very long process. After a while, I got out of it. I kept going to see UCB shows, I was aware of UCB when I was in college and kept seeing improv shows and was like, “This is where I need to be.” I started taking classes and then really dove into the scene. It wasn’t until a year or so when I was like, “I want to be a comedian.”

When you first came to New York, besides making ends meet, were there any challenges or surprises for you? Indianapolis, where you’re from, is a big city but not exactly a public transportation-based city.

S: I don’t know… The trains weren’t too hard for me to navigate. After a while, you get used to it. I guess what I didn’t realize when I moved to New York was that we are all kind of just okay with living in small quarters. We just live on top of each other. I lived in an illegal building with four bedrooms, three of which did not have windows, for four years. We had mice and roaches and there was a lot of stuff going on in that apartment. I was amazed at how well-adjusted I could be living in situations like that. Looking back, I’m like “How was I okay with that?” But at the time, that’s what I had to do because I couldn’t afford a better situation.

The article on you that went up on you yesterday in the Orlando Sentinel talked about all of the volunteer work that you did in New York. Was all of that going on while you were working in clothing stores and trying to get into the improv scene?

S: Yeah, a little bit. When I first moved here, I worked with Public Allies and at the same time I was doing UCB. So I would leave work, go straight to the city and take classes or go see a show or perform in a show or do an open mic or do a practice group. It was a busy time. There were a lot of busy years leading up to right now. It was a hustle, I was trying to make ends meet and also pursue this goal.

Understandably you’re very busy now between SNL, doing stand-up on the road, and doing other performing and writing. But are there any causes you still champion or volunteer for?

S: Yeah, Black Lives Matter and whenever there is a chance to shine a light on stuff that I care about, I do that. That’s not volunteering so much as giving exposure to things now.

On the Saturday Night Live end, had you read the Live From New York book about SNL growing up?

S: Not growing up, but I did read it.

Having read it, and having been on the show for a year and a half, do you find that the book had any misconception or inaccuracies? Is there anything that you could say “That’s not true” or “That didn’t happen?”

S: Well, all of it is stuff that happened before I got there, so there’s no way I could possibly know if things happened…

Let me rephrase that, I’m sorry. When they talk about the lifestyle of being on the show, do you feel that there are any misconceptions about it?

S: No, well, Live From New York is an oral history, so it’s people who worked there who are talking about their experiences working there, so I’m assuming they’re true. They’re just people recounting their experiences. People write about the show in all other sorts of ways and there are tons of misconceptions outside of it…

I’ll read between the lines and say that show that the show is everything that you hoped it would be (laughs).

Might we see anymore of the Pursuit Of Sexiness web series in the future?

S: Be with friends, be with people I love, dance, watch movies, all sorts of things.

So more staying local is what you like to do?

S: Oh yeah, I definitely love to stay in Brooklyn or around my house. I love going out, I love enjoying my neighborhood and enjoying my friends that all live very close to me. I’m not exactly a homebody but I do love being local.

Is there anything that you wish more people knew about you in general?

S: No (laughs), not really. The less they know is the better actually.

So finally, Sasheer, any last words for the kids?

S: Keep going, keep doing whatever you want to do.