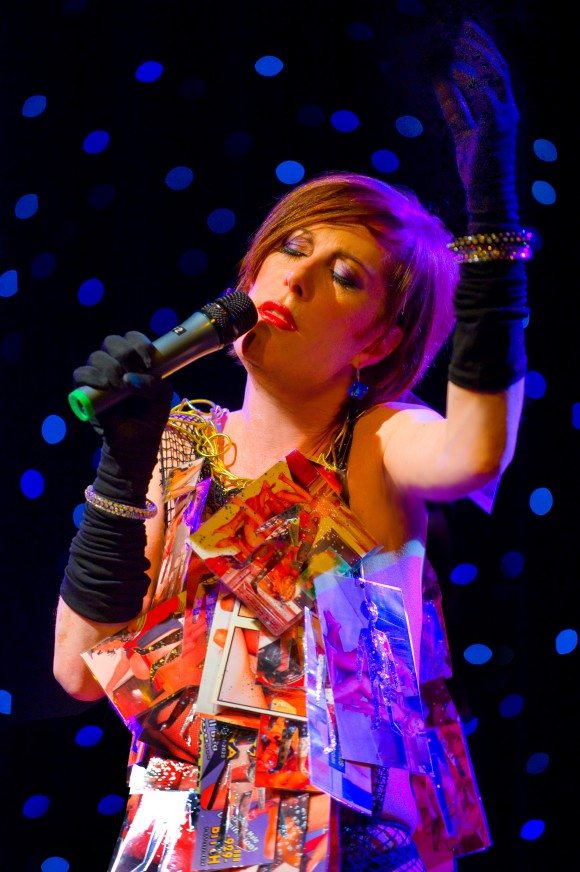 A new run of Justin Vivian Bond’s show Dixie McCall’s Patterns for Living is part of the celebration of v’s 25th year as a performing artist. The show opens on September 25th at Joe’s Pub, and continues on the 26th and October 2nd, 3rd and 4th. (Bond goes by ‘v’ for all pronouns and is referred to by the title ‘Mx’.) Mx Bond is a cabaret performer; V has worked to revitalize and update cabaret to make it relevant to modern society and to a community including outsiders.

The initial run of Dixie McCall’s Patterns for Living began on September 9th 1990, in San Francisco. V collaborated with Kenny Mellman on the show, and it became the basis for V’s future shows. V was inspired partly by the glamorous 1950s aesthetic of Julie London, who played nurse Dixie McCall on the show Emergency in the 1970s. Bond eventually created the stage persona, Kiki DuRane, which helped V find more freedom of expression, and the persona became an essential aspect of V’s shows. V’s earlier performances sometimes led to disrespectful and personal commentary based on Bond’s gender expression. The character of Kiki helped insulate Bond from such reactions; she allowed Bond to perform with more creative freedom, including less concern about V’s gender expression. In a 2011 interview, V said, “The difficulty in telling your truth is that you have to find it first. Once that happens, things begin to get a bit easier, because you know what you have to do.” V’s adoption of a persona has, it seems, made it possible to be more of V’s real self as well.

V’s performances as Kiki featured covers of various songs, with layers of meaning added through Bond’s performances. Eventually, V decided to expand their performances beyond that persona. V has explained, “With Kiki I had a lot of rage and there was stuff going on emotionally in the world that I thought I could channel. At the end of the 15 years of doing Kiki I didn’t want to have to manufacture rage in order to serve what that character had become. Then I decided I needed to rediscover my own natural voice, instead of a character voice, and that is when I started writing my own songs and discovering my own voice. I did some originals and some covers on Dendrophile (2011).” Bond’s shows now have more of a focus on authenticity, without losing the creativity V began with.

One of the intentions for the show was to provide an escape for their community. The show opened in a world shaped by the AIDS crisis and other struggles, particularly for the LGBTQ community, and Bond hoped to alleviate the demoralizing situations many found themselves in. The show’s reopening comes at a time when much has changed, and much has not. Amidst cause to celebrate, such as the historic U.S. marriage equality ruling in June, it is still a difficult world to live in for many, for those who are transgender and otherwise. Dixie McCall’s Patterns for Living still has the potential to be powerfully relevant; the empowerment and uplift from an innovative, liberating creative vision such as Bond’s remains vital.