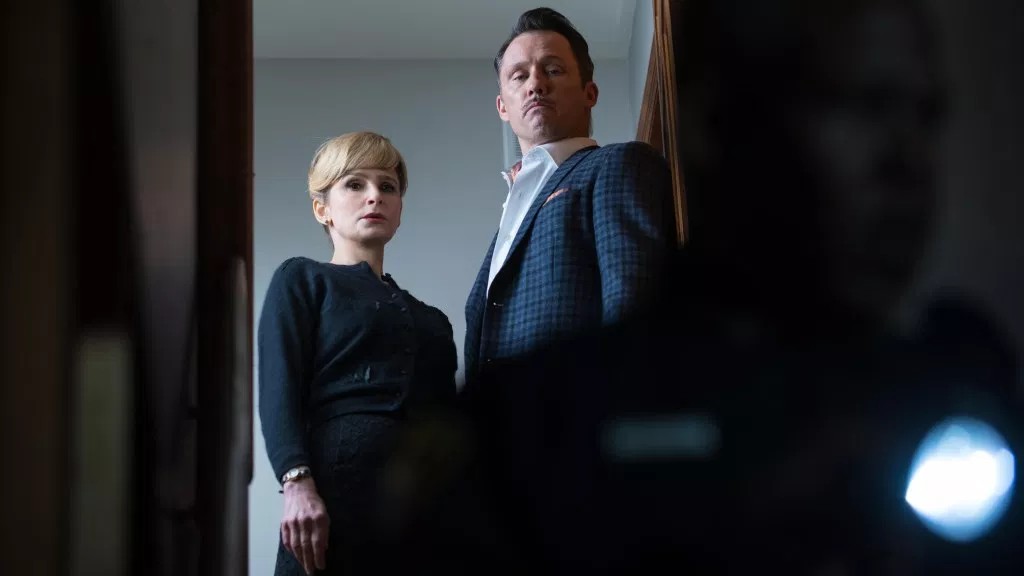 Villains is the story of a couple of petty criminals who stumble into a nightmare when they meet a pair of real “villains.” It stars Bill Skarsgård and Maika Monroe as the young couple, with Burn Notice’s Jeffrey Donovan and The Closer’s Kyra Sedgwick as their older counterparts. Unfortunately, a cast of competent actors couldn’t save the patchwork plot, plodding pace, and confusing characters.

When stickup artists Mickey and Jules (Skarsgard and Monroe) run out of gas after their latest heist, the couple breaks into the only nearby house looking for a new ride. They complicate their plans when they discover a young girl tied up in the house’s basement. When they confront the house’s owners, George and Gloria (Donovan and Sedgwick), the younger couple become prisoners themselves. Mickey and Jules must choose between their own safety and the safety of the girl.

The story of Villains covers worn ground, especially in the wake of critically acclaimed Don’t Breathe. Another film where burglars break into a house only to get their comeuppance from the house’s frightening owner. Even with Villains’ liberal use of cliche to build the plot, the story becomes unclear and unfocused when it tries to build momentum. Don’t Breathe has Stephen Lang’s terrifying blind homeowner as an antagonist. George and Gloria, in contrast, are mostly just wacky, or perhaps eccentric. Sedgwick’s Gloria is so ambiguously “crazy” that she nearly stops being a character. Jeffrey Donovan fares better, bringing a true-killer edge to his persona that makes him fun to watch, but awkward writing hampers his performance.

The tone of villains is stilted. It tries for horror/comedy, or perhaps a “black comedy,” but it mostly toggles between the two without managing to build either. One scene near the middle drags, taking up 10 full minutes in a film with a runtime under 90 minutes. It feels less like a genre fusion and more like genre indecision.

The writing aside, the film is easy on the eyes. The sets are detailed and fun, the strange 1950’s vibe lending itself well to the specific aesthetic of the film’s “villains.” The use of color, whether in set design, lighting, or clothing, is also excellent, building tone throughout. I wish as much time and care had been spent on the writing.