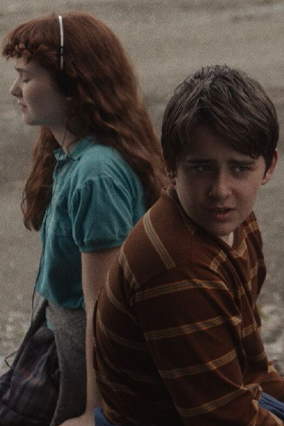 Jeff Roda’s debut creation shines a light on the harrowing teenage drama of sitting around in a group doing nothing.

Everything feels like a big deal when we’re younger. Teenage girls get the stereotype of endlessly complex gossip and rumormongering about nothing, but that’s unfair–those social conspiracy theories are really the non-stop inner monologue of a young teen mind. They don’t have the filter of experience yet, so every interaction feels significant. Maybe even life and death.

By some magic, writer/director Jeff Roda has trapped us in that world again. 18 to Party, his directorial debut, perfectly captures all of youth’s anxiety and fear in a plot where young teens mostly sit around and do nothing. He knows that, for young teens, every social interaction is dramatic enough for the silver screen.

18 to Party is the story of a group of 8th graders in 1984 upstate New York waiting to see if they get into a small-town nightclub. Exiled to the back of the building to wait, the kids talk, argue, and discuss the strange happenings of their town.

If the film has a main character, it would be Shel (Tanner Flood, Unbreakable Kimmy Schmidt), a perennially anxious boy who looks younger than most of his classmates, especially his friend Brad (Oliver Gifford, Unbreakable Kimmy Schmidt). We meet Shel agonizing over a test grade. He used to be “full honors” but isn’t any longer. Now he’s gotten a 3/5 on a quiz–a devastating blow. As subplots twist and unfurl, we realize that Shel’s previous academic record isn’t the only thing that’s bothering him. The kid is so wound up about his life that he has a hard time expressing himself about anything. That includes the aliens. Yes, aliens. There have been possible sightings around the town, and most of the parents are at a meeting discussing the possible extra-terrestrial incursion.

Tonally, 18 to Party screams Richard Linklater’s “Slacker,” the 1990 film about nothing much happening in Austin, Texas. The kids out back behind the nightclub mirror the inane conversations of Slacker, covering conspiracies, art, and life, and passing the time with what feels like idle discussions.

More than anything, though, 18 to Party feels like dropping in on an episode of Stranger Things that takes place between seasons. The beginnings of the conflicts happened in other episodes that we didn’t watch, and there are few developments. That makes sense in a show, where big changes accompany big moments. Big, definitive decisions happen when you’re getting chased by extra-dimensional creatures and shadowy agents. Life’s dramatic moments. And it’s clear that these kinds of moments happen in this 18-to-Party Universe. They just don’t happen in 18 to Party’s 90-minute run.

So what’s the point of the story? If nothing else, it’s that these moments can still feel huge as a kid. We, as adults, as movie-goers, know that this story is almost entirely mundane. A different movie would skip it entirely for the more exciting nightclub scene. But that’s not how kids this age think.

I still remember the abject terror I felt the first time I went to a high school Halloween party. I had seen Mean Girls a dozen times and knew the scene where Lindsay Lohan shows up…overdressed…to a Halloween party. Would this be the same? Would I get judged if I went in costume? It ended up the opposite: I was the only one not in costume, and I felt like every eye was on me the whole night. The entire episode feels like such small potatoes in retrospect.

Watching 18 to Party, you feel that hyperawareness of small details, a testament to the directing and the acting chops of the cast. When one character arrives and finds that all of his former friends have moved on without him while he was gone, you feel the weight press against him. Every twitch and fidget, every set of awkwardly shifting eyes, pushes him out of the group. If you watched the film on mute, you could follow the plot with body language alone.

That’s not to say that 18 to Party is without flaws. Unlike Linklater, Roda teeters between pure slice-of-life and a deeper metaphorical meaning. Certain elements, like the recurring UFO discussion, poke at a deeper meaning, but can’t seem to make them coalesce. It leaves some of the thematic exclamation points feeling more like question marks.

18 to Party is a fascinating and fun ride for anyone who remembers their early teen years. In fact, it is so vivid that anyone who has forgotten those years might have flashbacks. A cast of young, mostly inexperienced, actors pull off great performances. Writer/director Roda shows a talent worth paying attention to with his debut in both roles, channeling a moment that feels as real as Linklater’s Slacker. It will be interesting to see whether this is a one-off passion project or the first of many promising creations.