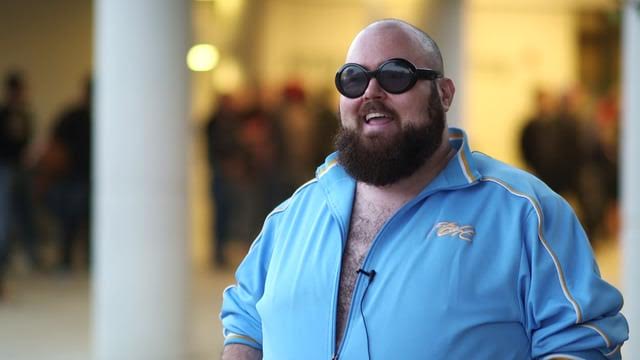 Mister Saint Laurent is very different from anyone I have interviewed for a “Really Busy People” column. While other interview subjects have had jobs that are not related to one another, none of them have been as shrouded in mystery as the one that many call “MSL.” The mystery extends further into how MSL had a copy of Axl Rose’s still-unreleased memoirs, how he was able to secure a domain name that only residents of Sierra Leone are supposed to have, and whether he is really the grandson of Louis St. Laurent, former Canadian Prime Minister.

Regardless of how MSL manages to get involved with so many unique projects, his work ethic is exemplary. He keeps long-standing relationships and – like many people in the wrestling business – he is clearly able to keep secrets. His response to my question about productivity is my favorite of the batch. For more information on the man that is MSL, you can go to http://m.sl.

As the story goes, you’re a newspaper-publisher, a musician, a podcaster and work in various facets of the wrestling and MMA industries. Any titles or roles I’ve missed?

Mister Saint Laurent: That pretty much covers it.

Given all of the unrelated work you do, when someone asks you what you do for a living, what do you usually say?

M: I usually tell them I’m a song and dance man.

Did you plan on having multiple jobs to make a living when you were younger? Or was this a natural evolution as a result of having different interests?

M: I think it was a natural evolution of it being so tough to make a living in entertainment and knowing I would need to juggle multiple projects to survive.

Is there someone whose career path you try to model yours after?

M: My biggest inspirations are Andy Kaufman and Don King.

Is there a field you haven’t yet worked in but one day hope to?

M: I do plan on getting into the family business at some point, which is politics. One of my grandfathers was Prime Minister of Canada and another grandfather was a member of [the Canadian] Parliament. My father is a political strategist and I could see myself in a similar role someday.

With regards to getting things done, are there any tools or apps you rely on most for productivity?

M: The key to productivity is to find things you are passionate about. If it doesn’t feel like work, you can work 15 hours a day, every day, without anything to complain about.

What is the best part about working within the world of professional wrestling?

M: The best part of pro wrestling is heading into fight night knowing that the guy you need to win is going to.

Do you feel that there are any misconceptions about you? Or is there anything you wish more people knew about you, given that your work is often shrouded in mystery?

M: I’m not really sure how people perceive me, so I don’t know what the misconceptions are, if any. We live in an age where privacy is evaporating, so sometimes the closest thing is the facade of privacy you can create if you don’t pay attention to whether people are paying attention.

Speaking of mystery, how did you wind up with a domain from Sierra Leone?

M: My web domain, M.SL was tricky to acquire because like many domain extensions, .SL does not allow one character registrations. But there used to be a pro wrestler named the Million Dollar Man [Ted DiBiase] who said that everybody has a price, and that’s true. I just offered Sierra Leone an insane amount of money and over time was able to work through the bureaucracy to get the deal done.

You’ve lived your entire life in Florida. Have you ever thought about living somewhere else?

A lot of celebrities live or have lived in your hometown of Winter Park. Amanda Bearse from Married With Children, baseball player Oral Hershiser, Summer Phoenix, Carrot Top and NBA player Rashard Lewis included. Have you run into any of those folks?

M: I grew up in Miami, but do live in Winter Park now. Winter Park is where WWE’s training center is, so it seemed like a smart place to live. I haven’t run into Carrot Top in town, but did run into him at a Guns N’ Roses concert in Las Vegas last year. Cool guy.

You were at the forefront of Guns N’ Roses controversy a few years back. With regards to the recent reconciliation between Axl and Slash, and the recent departures of Bumblefoot and DJ Ashba from the band, any idea what the band may be up to in the near-future?

M: I have a very good idea of what they’re up to, but unfortunately due to contractual obligations, I can’t speak about it.

Do you have any music-related projects coming up?

M: The older I get, the less interested I am in hitting the road and playing shows. Between pro wrestling and rock & roll, I was on the road full-time from the age of 15 until around 30. I’m 32 now. I’m over it. I’ve saved my money. My days of long rides in a van are hopefully over.

When you’re not working, what does a relaxing day look like for you?

M: While everyone else is getting drunk and high, and can’t see the world for what it is, that is your chance to make and execute plans. I really think the kids that manage to avoid getting caught up in the party lifestyle end up having such a huge advantage. That’s the best advice I can give.