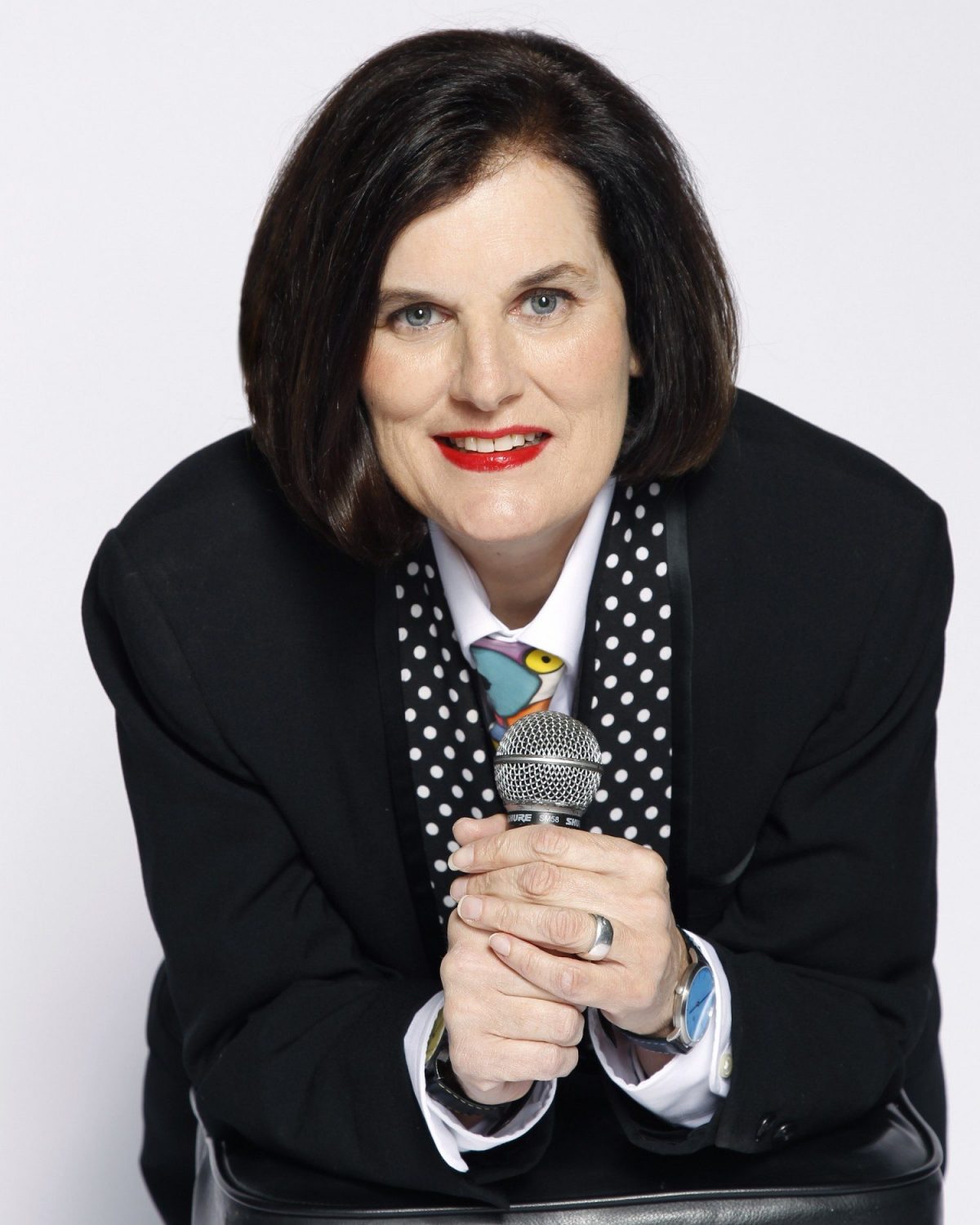 Paula Poundstone began doing stand-up comedy in the Boston area in 1979. Within a decade of starting, she was a regular on television shows and the winner of an American Comedy Award for “Best Female Stand-Up Comic.” She has never stopped worked as a comic, also managing to find time to write books, work as a columnist, and act. Paula — who was ranked at number 88 on Comedy Central’s list on the 100 greatest stand-up comics of all time — also manages to be on the short-list of regular guests on the NPR mainstay Wait Wait… Don’t Tell Me!.

On Dec. 16, Paula makes a return to New York City with an appearance at the Schimmel Center. Paula spoke to Downtown about her upcoming lower Manhattan performance and her long history with our city. She can be visited online at www.paulapoundstone.com and followed as @PaulaPoundstone on Twitter.

What do you wish more people knew about Paula Poundstone?

Paula Poundstone: This is a bit embarrassing, because I talk so much that really I am an open book. People know far more about me than they wish to. Having said that, I do wish more people knew about Rhonda Puckett and Theodore Pie, two characters that I have posted videos of on my goofy website.

Where was your first performance in New York City? What do you remember about it?

PP: I think my first performance in New York City was at The Rainbow Room, I think that was the name of it. It was in a tall building. It was for the taping of an HBO Young Comedians special. There were large potted plants on the stage. I wasn’t that good. I was often upstaged by the potted plants.

You have an upcoming show at the Schimmel Center. Is that the first time you ever performed in downtown Manhattan?

PP: I am not good with directions, and I love New York City, but I am overwhelmed by it. I never know what part of the city I am in, except for Times Square, and I don’t know why everyone else seems to know where they are. People talk about not getting in a cab “headed uptown” if they are going downtown. Can’t the cab turn around? I wouldn’t know uptown or downtown under penalty of watching The Bachelor. I think I worked at a place near a pizza place once. That should narrow it down.

Do you usually tour with an opening act? Any idea who will be opening for you at the Schimmel Center?

PP: I never have an opening act. I have the best audience in the world. They are smart, fun, game, honest, open, caring, and silly. A couple of nights ago I had cause, in dialogue from stage with an audience member to mention the “Worried Man” Kingston Trio song. I sang a bit of it to familiarize the audience member with it, and most of the crowd joined in all of the way through the first chorus. My crowd can be counted on to join in on the “Worried Man” song.

When I used to work clubs and the shows were structured with a headliner, a middle act and an opening act, other comics loved to do my shows. Not because I’m such a stroll in the park, but because they wanted to talk to my audiences. I’ve worked alone since I went into theaters because I’m selfish. I don’t want to cut my time short, with the best audiences in the business. By the way, when I buy the “sharing” size of peanut butter M&Ms, I often don’t share those either.

Have you ever performed any bizarre corporate or private gigs in New York?

PP: Not that I can remember, but I would like to do the “Aggressive Buskers” convention if they should have one.

In general, is performing stand-up in New York different for you than it is in other cities?

PP: No, except I am often lost getting to work in New York City. Sometimes I have to hole up in a Duane Reade until I’m oriented.

Is there an accomplishment you’re most proud of?

PP: I did an editorial piece for CBS Sunday Morning News about the dangers of screen devices to our society and to the developing brains of our children.

Is there something you’re still hoping to accomplish within your career? Would you ever want to host a podcast or an interview-oriented show again?

PP: Yes, I do hope to host a podcast.

PP: What kind of time?

Before you made it as a stand-up comic, you were a bike messenger. Do you still enjoy cycling?

PP: I fell off my bike, while traveling into a big blue mailbox once. I’ve ridden wobbly, like Alice from The Brady Bunch ever since.

PP: I don’t eat meat anymore, but when I did, I loved having a souvlaki off of a food cart on the street. It’s still my favorite way to enjoy a can of soda.

Finally, Paula, any last words for the kids?

PP: I am continually amazed by New Yorkers. I had always heard that they were rude or brash. I must say, my experience with them is not that at all. I’ve never been spoken to with anything but kindness when I have asked directions on my visits there, which I’ve done a lot. In fact, I think it is extraordinary that so many different kinds of people can live so close together and function as well as they do. I can’t wait to play to the crowd at The Schimmel Center.

Also, I want people to know that I fell out of a tree when I was a kid and got speared by a branch on the way down. I still have a small scar.