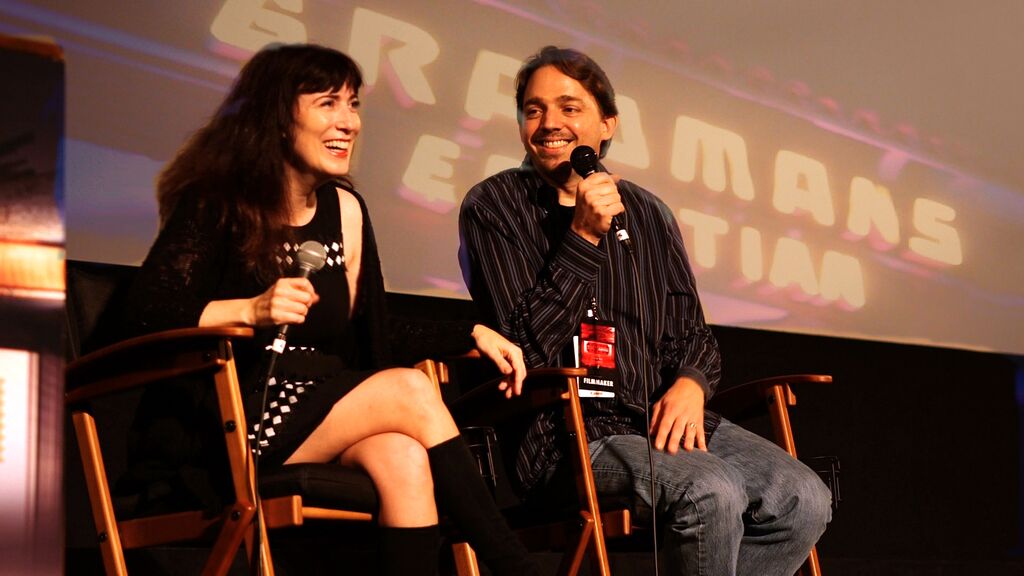 The NYC Independent Film Festival is known for bringing great indie cinema, no matter the genre or format, to New York City for a week-long celebration of the medium. Now in its sixth year — 2015’s festival runs from October 12th and 18th — not only are more than 100 screened works being presented by the NYCIFF this year, but there will also be panels and parties. More information about the festival as a whole, including film screening times, can be found on the official website: https://www.nycindieff.com.

Odd Brodsky is one of the films being shown, as selected by NYCIFF narrative curator Natalie Gee. I had the opportunity to do Q&A with Odd Brodsky director and co-writer Cindy Baer.

Cindy’s film shows on October 17th at 7:15 p.m. at the Producers Club’s Theater C (358 West 44th Street). She will be on-site for the screening and plans on hosting a Q&A afterwards.

Cindy kindly answered some questions that help clarify what it’s like to be an independent filmmaker in 2015. Given the industry success that Cindy and cinematographer/husband Matthew Irving have already experienced with their two films – Odd Brodsky, their second film, has already won three festival awards – one must assume that a bigger budget is in store for their next film, The Apologist.

On a side note, Cindy is seeking recommendations for a great Italian restaurant while in town, so feel free to send those to her directly – there is an e-mail address posted on the website of her company: www.freedreampictures.com.

How would you describe Odd Brodsky to someone who hasn’t yet seen it?

Cindy Baer: It’s a quirky comedy about being true to yourself. Audrey Brodsky, also known as “Odd Brodsky,” has wanted to be an actress ever since she was a little girl. She moves from Hollywood, Iowa to Hollywood, California and finds great success — working 40 hours a week at an office job she hates. After being offered a promotion at work, she quits to pursue her childhood dream. There’s just one problem: she’s not very good at it. When Audrey meets an aspiring cameraman on the internet, the adventure of her life finally begins. The movie is dedicated to anyone who’s ever felt stuck, and reminds us that we can change things.

How does the finished movie compare to the initial script you had co-written?

C: It’s an amazing feeling I can’t fully express, to watch something we wrote actually come to life on screen. Our stellar cast knocked it out of the ballpark. Tegan Ashton Cohan as Audrey, Matthew Kevin Anderson as Camera One, and Scotty Dickert as Spuds are hilarious, and play off each other brilliantly.

As for differences, what’s the old saying? A movie goes through three stages: the movie you write, the movie you shoot, and the movie you edit. Well, that is definitely true. We wrote the movie for a multi-million dollar budget, but ended up shooting for much less.  As such, we had to scale back our initial scope. For example, in the original script there was a gigantic musical number that took place by the gates of three major motion pictures studios in Los Angeles. We still have a great musical number but it’s much smaller, and takes place on a single stage instead. We also kept the studio gate premise but now it’s the backdrop of a different scene. This was actually shot at a school, and dressed to look like the exterior of a studio by our production designer Ken Oefelein, who transformed its appearance with paint and signage, while VFX designer Edgar Sunga added computer-generated “Hollywood hills,” to complete the location illusion. It’s actually pretty amazing what my producing partner Thomai Hatsios and I were able to pull off in terms of a large scope for our little movie, which included 30 locations, 54 speaking roles, 80 music cues, dozens of seamless visual effects and even the licensing a chart-topping hit song!

The script for Odd Brodsky was written with Matthew Irving, your husband, who is an accomplished cinematographer. Is it an entirely enjoyable experience to write a script with your spouse?

C: We usually have a lot of fun writing together. Once we had the basic overall theme, we fleshed out all of the plot points. Usually we’d drive off to somewhere peaceful like the beach, get distracted, and finish writing at home. Matt wrote the first draft based on our beat sheets and we would either do the re-writes together, or I would do them myself. One time while Matt was on location shooting another movie, he returned to discover I’d added three entire scenes. We have a very similar sense of humor and style, which makes things go relatively smoothly. On the rare occasion we disagree, we go with whoever feels more strongly about the issue. In the end, we know we can’t go wrong as long as the choice serves the story points.

Still from the film, “Odd Brodsky.”

How did you wind up submitting Odd Brodsky to the 2015 NYC Independent Film Festival?

C: I really had my heart set on screening in New York City, and so I started researching the best festivals in the Big Apple. When I came upon the website for NYCIFF’s narrative curator Natalie Gee, I felt a connection right away, because there was a quote from Wes Anderson’s Moonrise Kingdom… and Odd Brodsky was inspired by Wes Anderson! So it seemed like a sign that we had the same taste. I also noticed that this festival had an emphasis on cinematography, which is important to me too. We submitted the project and were selected! We are thrilled that our New York City premiere is at this great festival, right outside of Times Square!

Presumably you’ll be attending your screening, any chance you’ll be doing Q&A after the film shows?

C: Yes, I’ll be there! Also in attendance will be actress extraordinaire Elana Krausz, who plays the role of Zoey. We are both coming in from Los Angeles and look forward to meeting everyone at the screening.

Are there any films you know you’ll be checking out at the NYC Independent Film Festival?

C: One of the best things about festivals is meeting new people and seeing new works. I’ll be attending the second half and hope to see as many films as possible.I’m particularly excited about director/actress Ellen Gerstein’s Come Away With Me, as we are both members of the Alliance of Women Directors (AWD). I’m also looking forward to the Australian feature Sunday by Michelle Joy Lloyd, who I met at the Female Eye Film Festival in Toronto, which screened 86 films directed by women from all over the world.  Attack Of The Film Festivals looks hysterical, and Brian Crewe’s Une Liberation impressive. Also, it turns out that my multi-talented Odd Brodsky producing partner Thomai [Hatsios] directed The Falling Off, which is screening in the music video block!

Having won awards for your prior film Purgatory House, do you have any goals for Odd Brodsky?

C: Many of the goals for Odd Brodsky have been coming to fruition! We won a few awards including the Audience Award at the Broad Humor Film Festival in Los Angeles, as well as the Jury Award for “Best Feature” at the Valley Film Festival in North Hollywood, California. We’ve received some spectacular reviews and have appeared on two critic’s lists for “Best Films of the Year.” We’ve played 23 festivals all over North America. It’s been a blast traveling from Massachusetts to Texas to Iowa to Chicago! The next milestone is a VOD release so that all audiences at home can watch the movie on platforms like iTunes, Amazon Prime, Netflix, etc. My dream is to have it hit #1 on the iTunes chart, even if just for a day. Please keep an eye out for us.

Overall, do reviews and festival feedback affect your creative process at all?

C: Receiving positive reviews, invitations to well-known festivals and good media coverage definitely helps a movie get more recognition, which in turn brings better distribution opportunities. In addition, what’s so great about magazines like yours is that an audience can learn more about the making of a movie and appreciate it on an entirely different level. For example, Odd Brodsky contains a reference to a fictional movie called Hell Is Here, which is actually a parody of the first feature I directed, Purgatory House. Audiences might never make this fun connection, but thanks to the media and Festival Q&A’s, people can appreciate all sorts of hidden layers.

When you’re done promoting Odd Brodsky, what’s ahead for you? Are there any projects confirmed, or do you prefer to work on one project at a time?

C: I’ve got several irons in the fire, including the third feature in what could be considered a trilogy about women at different stages of life. While Purgatory House centered around an angsty teenage girl and Odd Brodsky around a 30-something woman, The Apologist will follow an anonymous do-gooder who’s in her 50’s.

When you’re in town for the NYC Independent Film Festival, are there any restaurants or attractions you especially hope to check out?

C: I will definitely be checking out Ruby Foo’s, Bare Burger and City Lobster! If any of your readers have suggestions for a good place with Chinese egg rolls and clam chowder, feel free to e-mail them to me. I also love Italian food.

Finally, Cindy, any last words for the kids?

C: Plastics. Just kidding — that’s a funny line from The Graduate. My last words would be this: Life is what you make it. Take a risk and go outside of your comfort zone. And then come say hello to us at the festival!