Next To None’s Max Portnoy handles Q&A about his October 13th show, prog-metal, growing up Portnoy 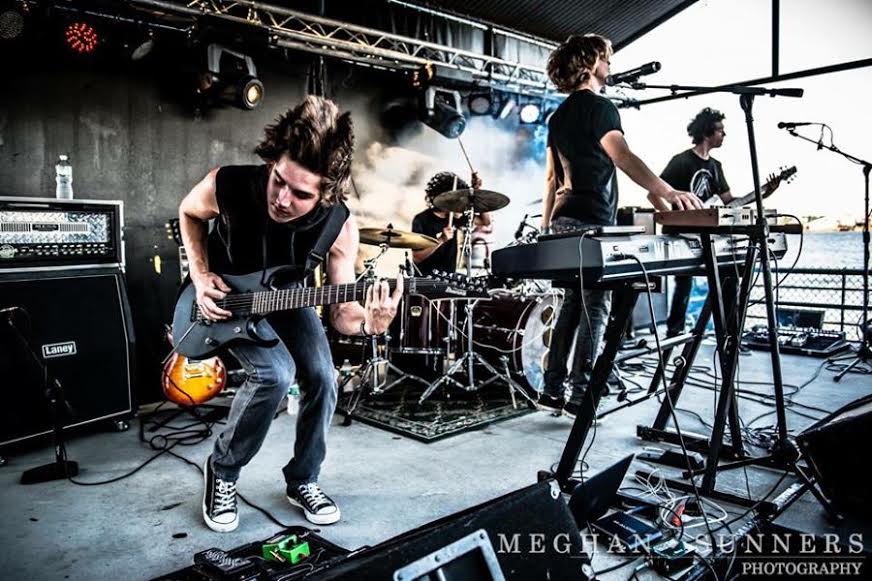 When I was 16 years old, I interned in the music business and wrote for some small-time publications on Long Island when I wasn’t at school, and people thought I was overachiever. In the case of drummer Max Portnoy – the son of founding Dream Theater drummer Mike Portnoy – he is one-fourth of Next To None, alongside guitarist Ryland Holland, bassist Kris Rank and vocalist/keyboardist Thomas Cucé. Next To None not only has a record deal, but has been steadily gigging over the past few years. Beyond playing shows on the Vans Warped Tour, they have opened for The Winery Dogs, Adrenaline Mob and Planet X’s Virgil Donati.

Currently signed to Inside Out Music – which has worked with progressive-rock favorites like Kansas, Yes guitarist Steve Howe and King’s X – Next To None’s debut album, A Light In The Dark, was released over the summer. Produced by Mike Portnoy, A Light In The Dark includes cameos from Neal Morse of Spock’s Beard and former Guns N’ Roses guitarist Ron “Bumblefoot” Thal. The music video for “Fortune Cookie,” which came out two years ago, included cameos from the band Anthrax, Twisted Sister’s Dee Snider, WWE superstar (and Fozzy singer) Chris Jericho and the three hosts of VH1’s That Metal Show.

On the touring end, Next To None has a lot of touring planned for the coming months. On October 13th, they will be appearing at St. Vitus in Brooklyn. A few weeks later on Long Island, Next To None gigs at Amityville’s Revolution Bar. As the quartet is based in the Lehigh Valley, Pennsylvania, additional shows in the New York City metro area to be expected in the very near-future.

With no member currently above 16 years old in Next To None, my favorite part about doing Q&A with Max was that I was still able to get a great “last words for the kids” response out of him. For more information about the group, you can check out their official website: www.nexttonone.net.

How would you describe Next To None to someone who hasn’t heard the band before?

Max Portnoy: I would describe Next To None as an extremely heavy progressive metal band. If you are looking to heavy riffs to jam out to, or if you are into technical time changes and feel changes, then Next To None is a great band for you to listen to!

Who was the first person that inspired you to become a musician?

M: Honestly, it was my dad. [Editor’s Note: Max’s father, Mike Portnoy, also played with Avenged Sevenfold and is now playing with The Winery Dogs and Twisted Sister.] Growing up watching him play on stage to thousands of people every night was truly inspiring. I got to tour all the time with Dream Theater and watch him from behind his kit, and it really got me to want to it myself.

Was there a particular band that inspired you to play prog-inspired metal?

M: Well, my biggest band influence is Slipknot. Even though they aren’t “prog,” they still inspired me to make my own music. Slipknot was the first band I ever became obsessed with and they inspire me every time I listen to them.

Is it true that you met your bandmates in school?

M: I did meet them in school. Ryland and I now go to a music high school but Kris, Ryland and I met in a normal public school in first grade. We were all friends since first grade and we used to jam together all the time and dream about being in a successful band. We met Thomas in about 6th grade and we totally hit it off with him and decided we would make a serious band, which has evolved into what is now Next To None.

Given your family lineage, was there any hesitation for you to try to play professionally?

Were drums your first instrument?

M: Drums were my first and only instrument. I can play bass and guitar but it’s nothing serious, I only play those instruments when we are writing new material. The drums were something I just instinctively went for,I never thought about anything else.

Your video for “Fortune Cookie” includes cameos from Anthrax, Twisted Sister’s Dee Snider, Fozzy’s Chris Jericho and the hosts of VH1’s That Metal Show. Were there any cameos you were trying to get but couldn’t make happen for the video?

M: The cameos were actually a surprise my dad did for us. After we finished the video and watched it for the first time, the cameos came out of nowhere and it was super cool!

With A Light In The Dark coming out over the summer, what’s ahead for the band? Any touring planned?

What is your favorite part about touring?

M: I love touring so much, I can’t pick a favorite part! I mean, if I had to pick the best part, I guess it would be performing and then hanging out with all the fans after the show and getting to meet so many awesome new people!

Do you remember the first concert you ever went to see?

M: I’ve been going to concerts ever since I was in my mom’s stomach. I can’t remember but I will bet a million bucks it was a Dream Theater show. I grew up behind my dad’s kit!

When you’re not playing music, how do you like to spend your time?

M: I’m a huge gamer. All I ever do is play drums and videogames and watch South Park. My favorite games would probably be GTA V, League Of Legends, Portal 2, Outlast, Minecraft, Spore and I recently started getting into ARK: Survival Evolved. As it may sound, I don’t get much sunlight!

In your opinion, beyond your own, what’s been the best new album released in 2015?

M: I’ve been obsessed with Lamb Of God’s album VII: Sturm und Drang. I’m a huge LOG fan as well and this album kicks absolute ASS! Chris Adler’s drumming is so amazing and crazy, I can’t stop listening to it. Chris is a huge drumming influence on me as well, along with my dad and [former Slipknot and current Scar The Martyr drummer] Joey Jordison.

Finally, Max, any last words for the kids?

M: Find what you love doing and stick to it. If music is what you love, then pursue music no matter what anybody says. You can do anything you push yourself to do!