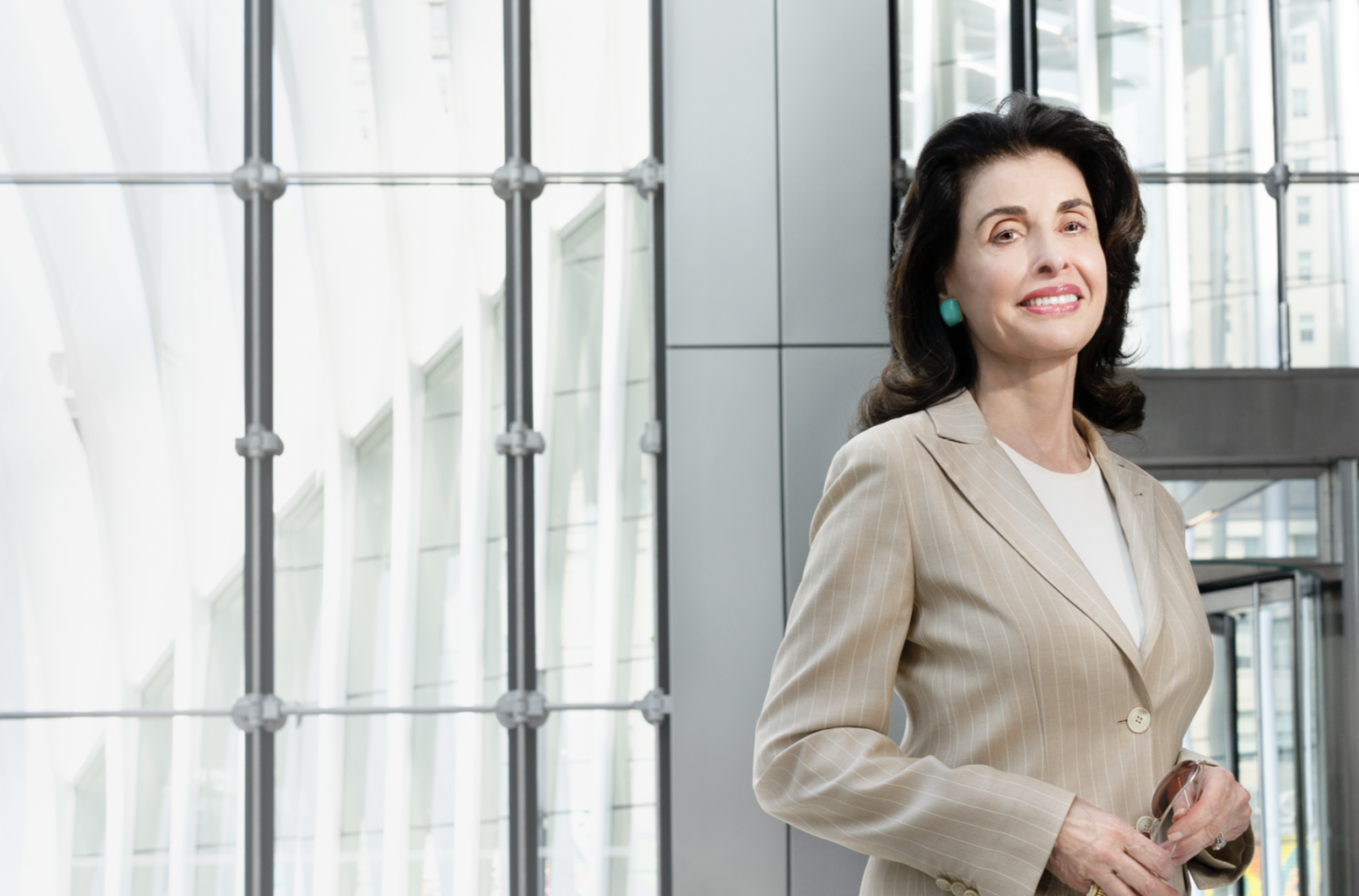 Mary Ann Tighe has played a critical role in helping Downtown grow up, evolve, and mature into the model 21st Century community that she now gushes about it like a proud parent!

“People used to have a clear vision of Downtown a couple of decades ago,” she recalls. “They would say they roll up the sidewalks at five o’clock. Then we had perhaps the greatest tragedy that ever befell our nation happen there.But look at it now — we have reset the narrative!”

The CEO of the New York Tri-State Region of CBRE, the world’s largest commercial real estate services firm, has been named “New York Most Powerful Woman” by Crain’s which says she has a history of “changing the face of Manhattan.”

In the late ’90s, she engineered the leasing of the largest commercial building in America at 55 Water Street and then in 2005, she joined Larry Silverstein in his efforts to bring new life to the World Trade Center.

It was a fateful meeting with Silverstein, on Downtown’s darkest day, that she credits for both her commitment to the community — and for illustrating the gritty resolve of the people of Lower Manhattan, that has lifted it to the sterling heights it has attained today.

“On the day of the attacks, I was walking up Second Avenue to get home,” she said. “He was about to go into a place to have dinner, and I ran into him on the street on the Upper East Side,” she remembers.

“We were standing in front of each other and I began to cry. And he put his arms around me and said, ‘Sweetheart, we’re gonna rebuild.’ That was one of the reasons I’ve felt such a commitment to the Trade Center and Downtown,” she said. “I immediately felt such an enormous emotional connection to the area.”

Like all New Yorkers, she felt the attacks were a violation — not only of the community and its people, but our way of life. “New York has a historic tradition of welcoming people of all backgrounds and faiths,” she said. “The attacks had to be addressed with a plan that showed inclusion will always overcome terror.”

Tighe points to the makeup of the new Downtown that has risen from the ashes of that horrific day as the most vivid proof that that is true. “The community was rebuilt because people realized, that not only was there no reason to be afraid to come down here, but that by doing so they were engaging in an act of patriotism.”

She credits Silverstein with exactly that — particularly for his commitment to diving into the aftermath of the tragedy with a commitment without condition.

He built 7 World Trade Center — a 1.8 million square-foot building — without a single tenant. He just knew that they would come. That’s commitment to be admired.

She credits the tax incentives that the government gave to people to move Downtown, along with the conversion of office real estate to residential as key triggers for people to realize that the community was a smart move for the future.

People were saying, ‘Not only am I not afraid, but this is where the opportunity is.

As awful as the attacks were, Tighe says the fresh start that followed has helped define the idyllic futuristic community that has grown out of tragedy.

“The government began to realize, ‘You know, if we invest in the infrastructure, we can make Downtown new in a way that no other part of our city is new.’ So now we’ve lived through ripping up every street and replacing the wires, redoing the subway tunnels, redoing the train hubs. It’s a whole new city Downtown! It’s the only part of New York City that has truly 21st Century infrastructure!”

Even more ironically, Hurricane Sandy ALSO played a role as a positive change audience. “Anything that wasn’t addressed after 9/11 was then addressed after Sandy,” she said. “So everything today is state of the art!”

Including the two transportation centers at the Fulton Street Hub and the Oculus— which has endured it’s share of criticism for being a $4.2 Billion boondoggle.

“I can’t tell you how frustrating it is to hear anyone say that the Oculus was a waste of time and money,” Tighe said. “It’s a place where 12 subway lines come together, plus the PATH train, and it’s an active shopping mall that generates significant rent every year for the Port Authority.

To me the Oculus has already produced value up the kazoo.

She points out that the Oculus’ $4 billion price tag doesn’t look so outrageous when it’s compared to the new Number 7 line station built at Hudson Yards cost $2 Billion alone! “Please explain how that is a waste of either time OR money.”

She also is over the moon over the fact that that very transportation facility, not only serves the new 65,000 residents, 15 million annual tourists and 35,000 students who pass through it every day, but also provides them with retail possibilities that just weren’t there before!

I think people forget that Downtown was not a retail environment at all — until the World Trade Center came along.

“I feel such pride with the companies that we’ve brought here,” she said.

And then there are those locations that predated and survived the attacks, only to mature and come into their own nearly 20 years later.

“All you have to do is look at the playing fields of Battery Park City and say to yourself ‘Oh, this is perfect.’” said Tighe. “I used to think it was so barren many years ago and recently I realized, it has completely grown up!

It’s such a beautiful place for families!

Tighe is also deeply encouraged by the redevelopment of Pier 17 at the Seaport. “South Street Seaport is Seaport is undergoing the most incredible conversion,” she remarked. “It has attracted the world’s attention. ESPN broadcasts from there. It also has this phenomenal outdoor space on the roof that has opened as a spectacular outdoor concert venue!”

Bit by bit, they’ve attracted more and more restaurants, and high-end retail. Office space will be used by incredibly cool companies and that will change the entire dynamic of the place!

Tighe also credits the difficult economic times following the attacks as a factor in Downtown’s amazing comeback. “As tragic as 9/11 was, it also deeply affected property values Downtown,” she explained. “So, for a period of time, companies and individuals were able to come in and buy things that weren’t priced as though they were Manhattan properties. Anybody who bought property here in 2002, 2003 or 2004, looks like a genius today.”

As a result young and struggling companies found greener pastures Downtown, and young people moved down here to be near their jobs and be a part of a vibrant and growing community.

“It’s amazing how fresh and enthusiastic this community is,” she marvels. And while there is so much that is new in the area, there is also its rich history which provides just a strong an attraction.

“You have old and new architecture and everything in between,” she happily exclaims. “You’ve got Francis Tavern that dates back to revolutionary times. You’ve got the Woolworth building from 1913. And now you’ve got, One World Trade Center, which represents the future. So there is this delicious cocktail of architectural styles and structures that really looks like, frankly a great city. It doesn’t look anything that was all built at once.”

And she credits much of the comeback to her friend and partner in the man behind the second coming of the World Trade Center — Larry Silverstein.

Largely due to his courage, confidence and commitment to the community, Downtown is the fasting growing community in New York City with a population that has increased by a phenomenal 98 percent, and has emerged with a diversity of people, businesses, transportation hubs, first-class hospitality and shopping options, and recreational facilities never dreamed of before that horrific moment in history.

“I shudder to think about what would have happened if Larry had not had the level of conviction that he had.

To borrow a phrase from “The Natural” he built it — and they came.

I feel such pride in being able to have been involved and have been able to stand up in front of the nay-sayers and saying, ‘This is coming’ and now it’s HERE!