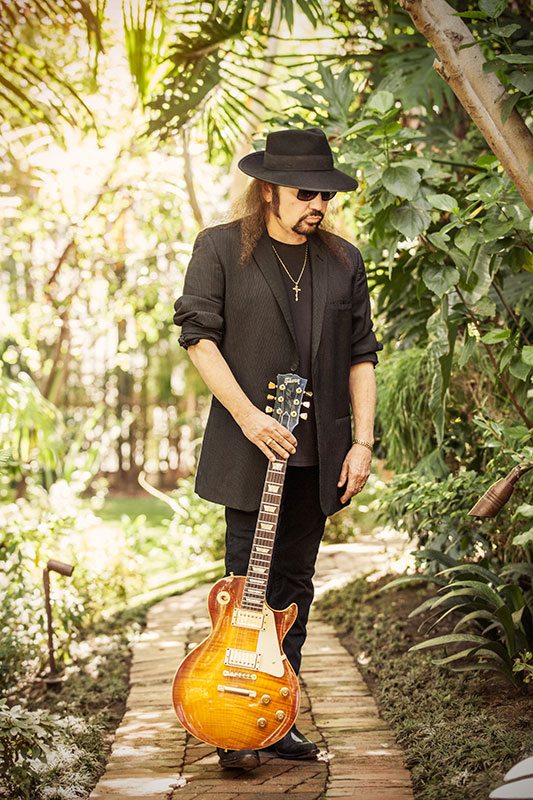 As a founding guitarist of Lynyrd Skynyrd — a Jacksonville, Florida band formed in the 1960s — Gary Rossington had sold many millions of albums. Songs co-written by Gary (e.g. “Sweet Home Alabama,” “Don’t Ask Me No Questions,” “What’s Your Name?”) are still played on countless radio stations, while Skynyrd continues to tour the world. Simply put, Lynyrd Skynyrd is in rare company, not only as into the Rock & Roll Hall Of Fame, but based on how many key artists have covered the group’s music; Metallica, Alabama, Kid Rock, Garth Brooks and The Drive-By Truckers are just a few of those influenced artists.

Gary Rossington has stayed musically-active beyond his Skynyrd responsibilities, not only guesting on other artists’ recordings, but also as part of Rossington with wife Dale. Dale first collaborated with Gary in 1977 when opening for Skynyrd as part of 38 Special. Their collaborating continued in the 1980s while Gary was part of the Rossington Collins Band; Dale would go on to earn the moniker of “First Lady Of Southern Rock.” 10 years in the making, and just released last week, Take It On Faith is the new album for Gary and Dale. Beyond the aforementioned Rossingtons, Faith features cameos from ZZ Top’s Billy Gibbons, Little Feat’s Richie Hayward, and Delbert McClinton.

Downtown had the privilege of conducting with Gary on the eve of the release of Take It On Faith. More on Gary and Dale Rossington and their new album can be found on the website of the Loud & Proud record label.

Gary Rossington: It was just so long ago I’m trying to remember…I think we actually opened for Al Kooper’s blues project, I guess it was Capitol Theatre.

Any plans to tour in support of your solo album?

GR: Not as of now, but if we get a lot of offers or something comes along that is worthwhile, we will!

When you wrote Take It On Faith, did you know that it was going to be the name of your album? Or at least the focal point of the album?

GR: No, we actually thought one of the harder rock or blues songs would be it, but our record company picked this one because It fit in with our beliefs and everything that was going on at the time.

GR: “Dance While You’re Cookin’” because that’s a real fun one.

Did you know all along that you were going to have so many guests on Take It On Faith, or did that happen organically?

GR: Yeah, just happened by coincidence, but also by getting people as they were in and out of the studio where we recorded.

Lynyrd Skynyrd was a big part of the storyline of the TV show Roadies. Was that something you were at all involved with?

GR: No, but I was asked by Cameron Crowe to put music to it. There was one episode about us but I was having health problems at the time and couldn’t make it. It was kind of weird to see when you’re in a band, it wasn’t quite like that. It wasn’t real to me.

Did you find that there was a renewed interest in Skynyrd after Roadies told the band’s story?

GR: No, I did not notice, that but I was touring really hard and not really catching up with that. I love Crowe, no disrespect for him.

Is there anything that you think people often get wrong about Lynyrd Skynyrd and its history?

GR: Not that I can think of right off, because there are so many different versions out there, and things people say throughout.

Is there something that you are still aiming to accomplish as a musician?

Do you have a favorite cover version of one of your songs? Personally, I can’t get enough of Metallica’s version of “Tuesday’s Gone,” which I believe you played on.

GR: Yeah I love that one, let’s pick that one. Also, Shinedown did a great cover of “Simple Man.”

GR: I like to fish and I have two grandkids who are half-grown, almost in their teens, so I like to go and watch them play sports.

Do you have a favorite restaurant or destination in New York?

GR: Jackson Hole — we have a place in Jackson Hole, Wyoming also, so we like to stop there in New York City.

GR: Work hard and know your own business.