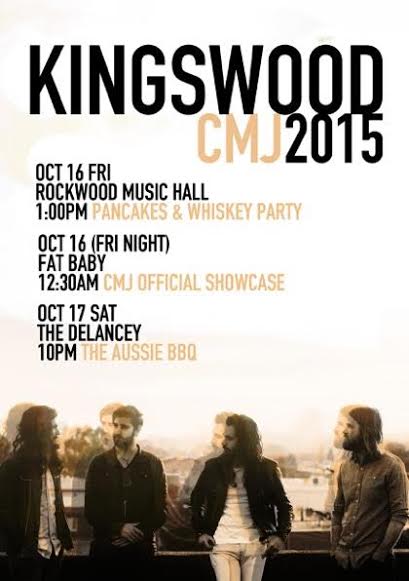 I first learned about KINGSWOOD when I saw their name listed on some upcoming CMJ events. The Melbourne-based quartet is playing intimate shows at Fat Baby (October 16th) and The Delancey (October 17th), yet in their native Australia, they’re a major, award-winning, industry-recognized group. Triple J – which is sort of like Australia’s BBC but only much cooler – loves the band, which has led to an APRA nomination, Top 10 chart success and tour dates alongside AC/DC.

Alex Laska, guitarist for KINGSWOOD, took the time to answer some questions for Downtown. Although I came into the Q&A expecting Alex to be unfamiliar with New York City beyond TV and movies, it turns out that he’s been all over the New York metro area. There was a lot of gratitude in his responses, and I certainly don’t oppose his support of the Mets.

Rounded out by lead vocalist Fergus Linacre, bassist Jeremy Hunter and drummer Justin Debrincat, more information about KINGSWOOD can be found at http://www.kingswoodband.com.

How would you describe KINGSWOOD to someone who hasn’t heard the band before?

Alex Laska: KINGSWOOD starts in the blues and ends in harmony, with a progression of guitars, both light and heavy, and a progression in the music also. It’s not a revival act, it’s 21st Century Rock and roll.

Having been recognized by ARIA heavily, do you have a career accomplishment you’re most proud of?

What led to the decision to making your debut album in Nashville?

A: Serendipity and the right guy at the right time, with the right e-mail to the right person type deal! Someone had passed on our EP to someone else, who passed it on to someone else and that someone else happened to be Vance Powell [who’s worked with Jack White, The Dead Weather and Arctic Monkeys]. It just so happened that we’d got into a really heavy vinyl and tape phase and Vance is the master at that stuff. It also seemed like Nashville was calling and once we arrived, it felt like home almost immediately, so everything aligned the way it was supposed to.

Do you have a follow-up to Microscopic Wars in the works?

A: Indeed. Currently writing it from the beautiful city that is New York, and letting the whole experience of being here over the last couple of months infiltrate and influence in all the way that it can and inevitably will!

With regards to your upcoming shows in New York City, what should people who’ve never seen you live before expect?

A: The next step in what would be deemed rock music. Authentic, innovative, dynamic, real. You will see a real band, play real music that is real to them. And it’s exciting.

If you have downtime in New York, are there any places that you’re hoping to visit or see?

A: Having been here for almost three months now, I’ve almost checked off a lot of the boxes of places I’ve wanted to see. I recently saw Hamilton on Broadway. It was simply one of the best things I’ve seen, also been to plenty of ball games, explored Long Island and further out east to Montauk, lived both in the Village and Upper West Side, so have spent lots of time in Central Park, Washington Square Park, Tompkins Square, Museum Of Natural History, and exploring bars, restaurants, shops, music shops particularly, Rudy’s in Soho is one of the most beautiful shops, and Main Drag in Brooklyn is great.

Who is the best band from Melbourne that our readers may not have heard?

A: KINGSWOOD. Just kidding. But seriously. There’s no such thing as the “best” band, but if we’d recommend someone, we’d recommend King Gizzard and The Lizard Wizard for a good dose of psych rock. Just out of Melbourne, actually.

When you’re not busy with your rock career, how do you like to spend your time?

A: Music. Writing music. Playing different music. Movies, sports, lots of sports, particularly U.S. sports. Basketball , which is starting soon, super-excited. Baseball, Mets are looking really good this season, could even pinch it. And NFL. Exercise, skateboards. Writing. I don’t know if being a musician ever stops?

Finally, Alex, any last words for the kids?

A: Stay in school, keep your nose clean, don’t do anything we wouldn’t.