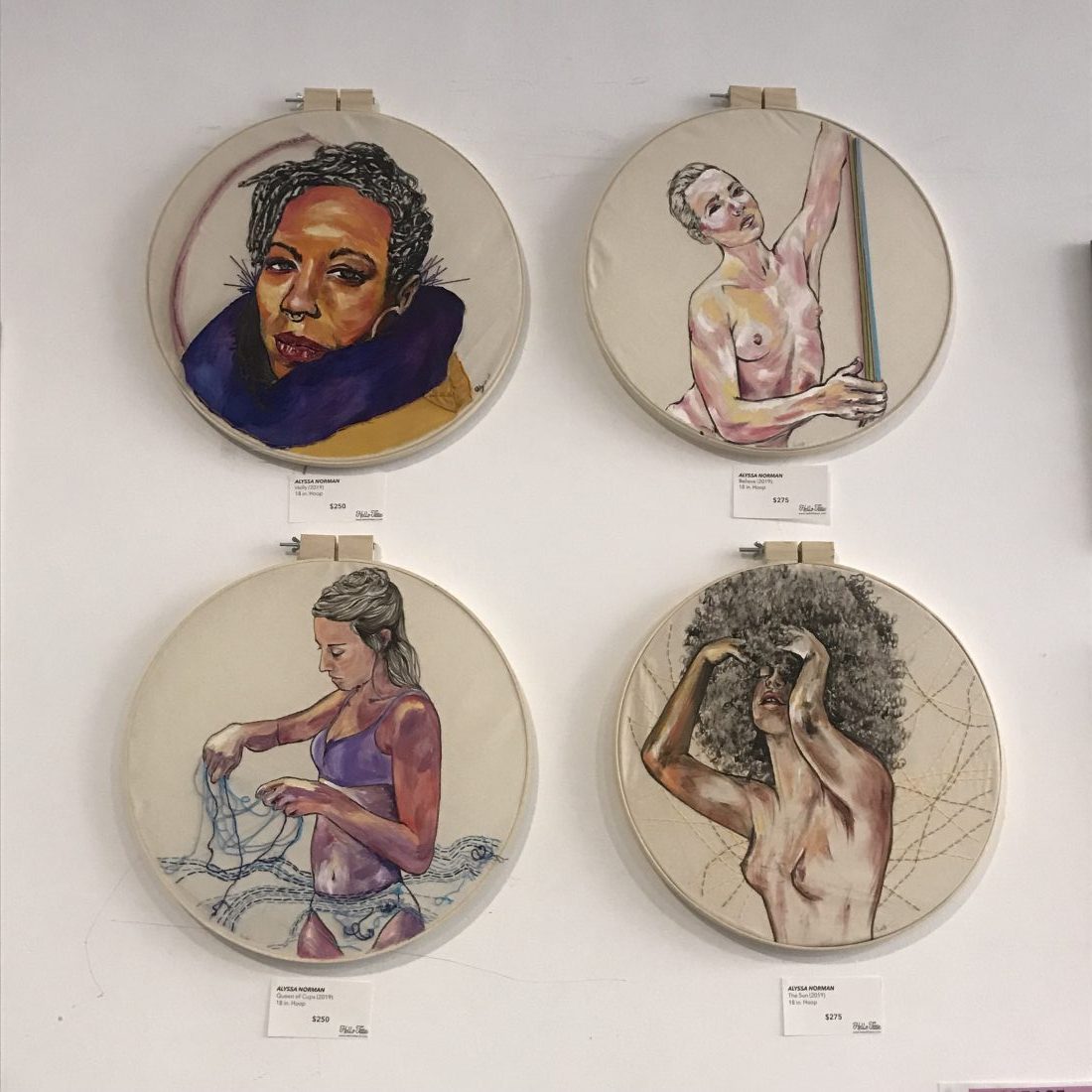 Art is a powerful tool that can give meaning to different aspects of life one would not expect, from relieving trauma and tension in an artist’s life, to making political and social commentary on the state of current events. Some artists describe art as having the ability to embrace love and uplift others, or being able to release one’s feelings and be vulnerable with oneself, as well as an audience.

These were all sentiments expressed by artists at HelloTittie’s 3rd Annual Creative Chicks Art Event over the weekend. As a brand committed to empowering women through creative online content, insightful interviews, and curated art events, HelloTittie provided a platform for over 20 women to showcase their work to a greater audience.

The event took place at Beyond Studios NYC in East Williamsburg, Brooklyn with collections of work expanding various art forms, ranging from portrait photography, canvas paintings, and even a film screening. Artists filled the open space, engaging with other creatives about their work, drawing inspiration for future projects, and preparing to have their work sold to an eligible buyer.

One artist that stood out from the rest was a model by the name of Flora Dizon. She began modeling in preschool when a photographer came out to her school to take photographs of some of the children. Initially, her parents were shocked by the outcome of how well the photos came out and how comfortable their daughter was because she was always the shy child who kept to herself. She said whenever the camera was in front of her, she was “able to become a whole other person. And I think it was because I wasn’t directly looking into someone’s eyes, I was just looking at a lens. I didn’t feel like people were staring at me. I felt like I was able to be myself.”

It wasn’t until after she graduated high school and started freelance modeling that she expressed an interest in being a nude model. A photographer at the time asked if she could pose nude and make shapes using her body, while captured using low lighting to appear as a silhouette. She was blown away by the photos because she fell in love with the artistic quality in it – being able to release all her bottled up emotions and feeling completely vulnerable and empowered simultaneously.

With her own art, Dizon implores her audience to feel more self-confident in themselves, in their bodies, regardless of wrinkles, stretch marks, or curves. “I just want people to be more open to being in their natural state and being open to show who they are without having to always hide themselves.”

At the event, Dizon wore a purple bodysuit and rhythmically moved her body to the tune of her friend Maria Burgos’  spoken word poetry. Burgos’ pieces were received with cheers and snaps from the crowd as she performed a piece describing the many labels placed onto her as a woman, and an improvised self-reflection on how she felt that day.

She first discovered spoken word after her brother approached her one day and said he would write the first few lines of her first rap, but that she’d have to finish the rest. The first few lines started off as “My name is Maria, I’m worth more than gold” and she went ahead and finished the rest of the rap. She found so much satisfaction in her writing that she started to purchase journal after journal and fill them up with all her thoughts.

Down the line, her work adapted into a means to vocalize her written thoughts about politics and being a woman, because “I spent so many years not speaking up in any kind of scenario that you can think of, and I wanted to speak up through my art because it’s so powerful.”

Marisa Silva, a photographer from Phoenix, AZ but now living in NYC, didn’t originally find her love for art with photography, instead, it was music. All her life, she grew up playing music and had every intention of pursuing it as a career up until four years ago when she permanently damaged her voice. She had lost her voice three time back in 2015 and instead of taking a break from expressing herself artistically, she picked up photography. She had always grew up with cameras and photography throughout her life, but it wasn’t until her break from music inspired her to take it more seriously.

Silva said that she hasn’t found the right moment to integrate her passion for music and photography into one yet, but pointed out that every photo on display at the event is named after a song title. One photo was entitled “Golden Hour” after a Kacey Musgraves song and was taken during the golden hour as the sun setting.

In between admiring the artwork and interacting with the artists, guests were able to take advantage of additional amenities offered at the event. For refreshments, HelloTittie offered an open bar for its guests, with drinks from Harmless Harvest, Monster Energy Drink, and Drink BABE. Guests were also invited to engage in the Instagrammable photo space across the room, decorated with an array of balloons, a kiddie pool, and beach balls shaped like boobs. Throughout the night, artists participated in live painting segments in the middle of the studio space. Guests also had the chance to win raffle giveaways from sponsors like Aya’de Health & Beauty, Magic & Manifest, Rosehound Apparel, Idlewild Co., and Kelliebrew.

It was a special night to be celebrating women with various backgrounds and connections with art, all in one space – it was impactful. Now artists and art lovers will have to wait another year to see a fresh batch of phenomenal work.

For more information about HelloTittie, their vision towards women’s empowerment, and future events, visit http://www.hellotittienyc.com, and check them out on social media through Facebook, Twitter, and Instagram.