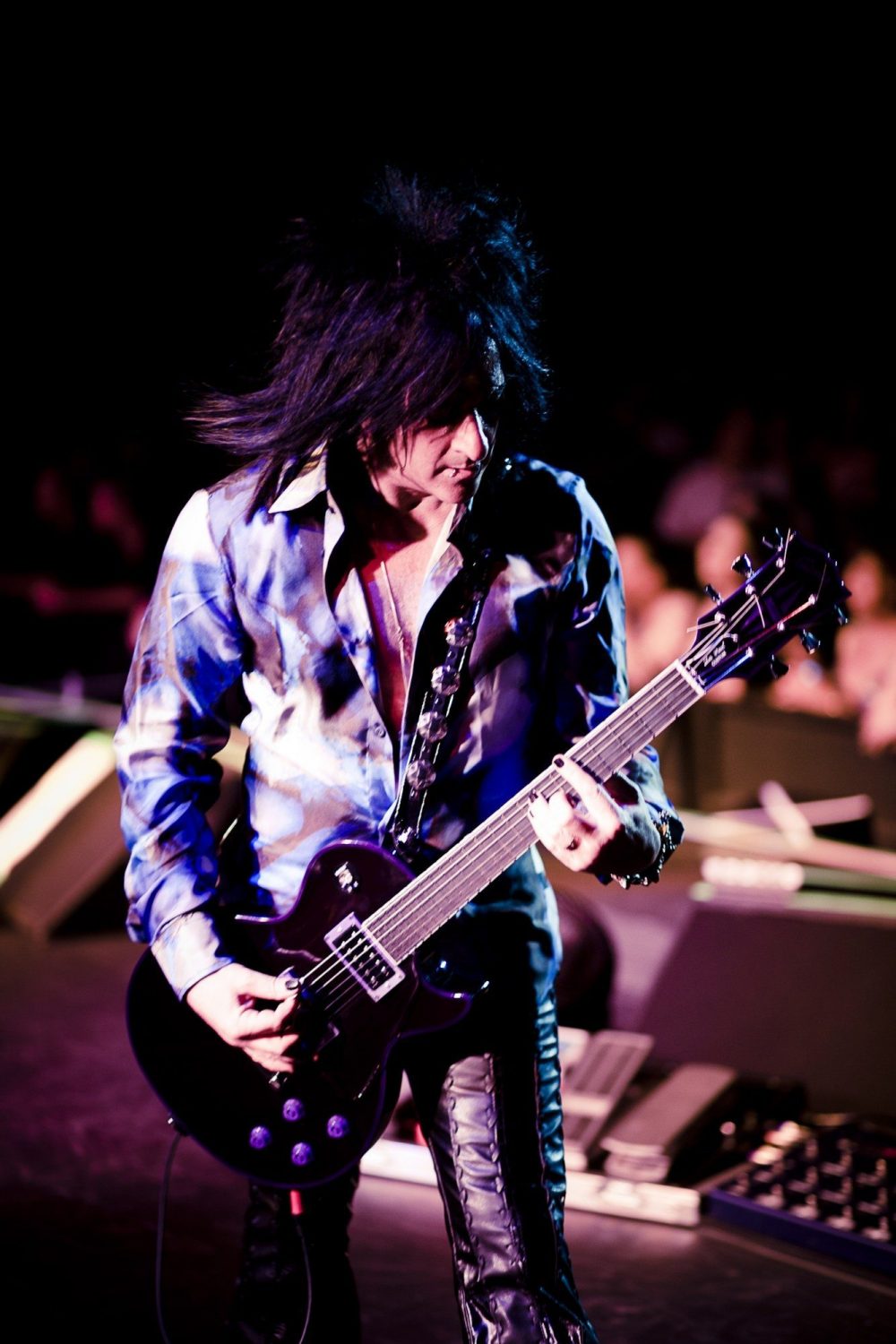 As a successful musician for decades, Steve Stevens has a lot of claims to fame. As Billy Idol’s long-time guitarist, he co-wrote most of the Idol anthems still regularly heard around the world. He won a Grammy for his work on the “Top Gun Anthem” from the hit Tom Cruise movie. He has played on recordings by Michael Jackson, P!nk, Diana Ross, Joni Mitchell and Robert Palmer, to name a few key artists. Steve was also featured on the E! reality show Married To Rock as his wife Josie was one of its stars. In turn, it is not surprising that Steve has his own signature guitar via Knaggs Guitars, a signature amplifier via Friedman Amps, and signature guitar pickups via Bare Knuckles.

In 2016, Steve is still at it with Billy Idol; a new album, Kings & Queens On The Underground was released in October 2014. Notably, Steve also hits the road often as a guitarist in Kings Of Chaos. An all-star band featuring members of Guns N’ Roses, ZZ Top, Linkin Park, Slipknot and Stone Temple Pilots, Kings Of Chaos has gigs in the area this month. KOC can be seen at Montclair’s Wellmont Theater on Dec. 17, the following night at Long Island’s The Paramount, and a few days later at Irving Plaza on Dec. 21. In addition, Steve has a new solo album in the works.

Downtown caught up with Steve — a native New Yorker who lived downtown for years — for an interview via phone. More info on Steve and his upcoming shows with Kings Of Chaos can be found at www.kingsofchaosband.com.

I know that you were born in Brooklyn. Where in Brooklyn did you grow up?

Steve Stevens: I was born in Brooklyn, but my parents moved just to Far Rockaway by the time I was one and a half, two, so I grew up in Rockaway.

And you lived there until you moved to Manhattan?

SS: Yeah, pretty much so. By the time I was 16…I was in a cover band so I kind of moved out…The band was based in Ozone Park, Queens, so I’ve kind of lived in every borough of New York.

You and Billy first met in Manhattan?

SS: The band I was in before Billy Idol was managed by Bill Aucoin, who was the manager of KISS. And he had just brought Billy over from London. So I was still living actually, by then I was living in Kew Gardens, where my parents had moved to, so when I met Billy I was living there.

And where in Manhattan did you live over the years?

SS: My first place was on Jane Street over between West and Washington, so I was like right in the middle of Greenwich Village. And then I moved to Bleecker and Broadway, and I lived there until I moved to Los Angeles.

And when was it in your career that you moved to Los Angeles?

SS: I came out to do reunite with Billy, he had moved to L.A. And this is 1992, I believe…Different plan, let’s get together and do a record and I came out. Originally I was in a hotel, and I went into a residential hotel and got my first apartment, but I decided to live in L.A. officially like 20 years ago.

What was it that made you move out there? Was it just work or had you gotten tired of the weather here?

SS: Weather was never a factor, but a lot of musicians had moved out to L.A. and had started to…People would call to work with them, let’s say like Duff McKagan or someone, and everyone had a home studio and I thought, “Well that’s really cool, I want an environment at home that I could work in.” It seemed like a really hard thing to do in Manhattan, you always had to put money in the pockets of somebody else who had a recording studio, and I thought, “Well, I’d rather invest in it myself.”

And the environment, there just seemed to be a lot of musicians that I knew from New York that moved out here by then. New York is such a night city and stuff, and I’d made the decision to get sober as well, and I thought, “Well this is probably going to be so much easier, I can get In too much trouble in New York.” (laughs)

Sure. Do you remember the first venue that you ever played in Manhattan.

SS: Here in Manhattan we played Great Gildersleeve, which was the club right down the street from CBGB.

And then what was the first New York venue that you played with Billy?

SS: Max’s Kansas City. We played unannounced. We had found out it was closing and Billy had some friends who were [playing]…and we arranged to play unannounced. Because it was really important to us to play Max’s before it closed, so that was the very first Billy Idol gig.

So you have these East Coast dates with Kings Of Chaos. I understand that Billy Idol and you have some dates coming up in Vegas. What’s the next like six to twelve months looking like for you?

SS: Idol and I, we did our Vegas residency this year at the House Of Blues, which was just fantastic…We pulled out a lot of more obscure tunes off our records and when you’re in one venue for that long, you really gets to hone your show down. You get your lights exactly the way you want them. So we return to Vegas in March next year and I’m going to start recording another solo record…That kind of got put on the backburner for 2016, so that’s one of my priorities and I’m planning on doing a solo tour in Europe in April, and we’re just getting the dates together for that.

Do you have any hobbies when you’re not doing music?

SS: Hobbies…I don’t know, I do all the kind of same things that people like to do, I love films and all that kind of stuff, and my wife and I are a year overdue on a vacation, so we’re just now trying to find out where we’re going to go on vacation and kind of recharge our batteries.

Well, thinking about that for a second. You know a lot of people would go to Vegas for a vacation but that’s more of a working city for you and then you’re from New York and you live in Los Angeles. So you’re the kinds of people that would look to go somewhere remote?

SS: Yeah, absolutely. We try to get off the grid as much as possible.

Is there anything that you miss about New York and not having lived there for 20-something years?

SS: Yeah, I mean, the energy of the city is amazing and when I go to New York now I do all the things I used to make fun of tourists for doing, like going to Broadway plays. I guess growing up in New York, I went to High School Of The Performing Arts in Manhattan. So I kind of overlooked a lot of the things that Manhattan has to offer. So now when I go back, I make it a point to like hit up new restaurants and catch plays and things like that.

I think what I miss most is New Yorkers’ personalities because people will tell you exactly how they feel, and there’s not as much backstabbing. If somebody is pissed off at you, they’re going to tell you and you’ll either work it out or part ways or whatever. But I like the directness of New Yorkers…There’s an energy about New York that nowhere else has.

So finally, Steve, any last words for the kids?

SS: For the kids, yeah. People, come out and see Kings Of Chaos…Primarily we do it for the fun and just the catalog is just incredible and some of the players. And come on, just seeing Billy Gibbons and myself onstage, trading off solos and stuff. It’s a once-in-a lifetime experience.