Four Pillars Gin invites you to an Australian Happy Hour at Dante on 5/29, co-founder Stuart Gregor talks more about the brand and more 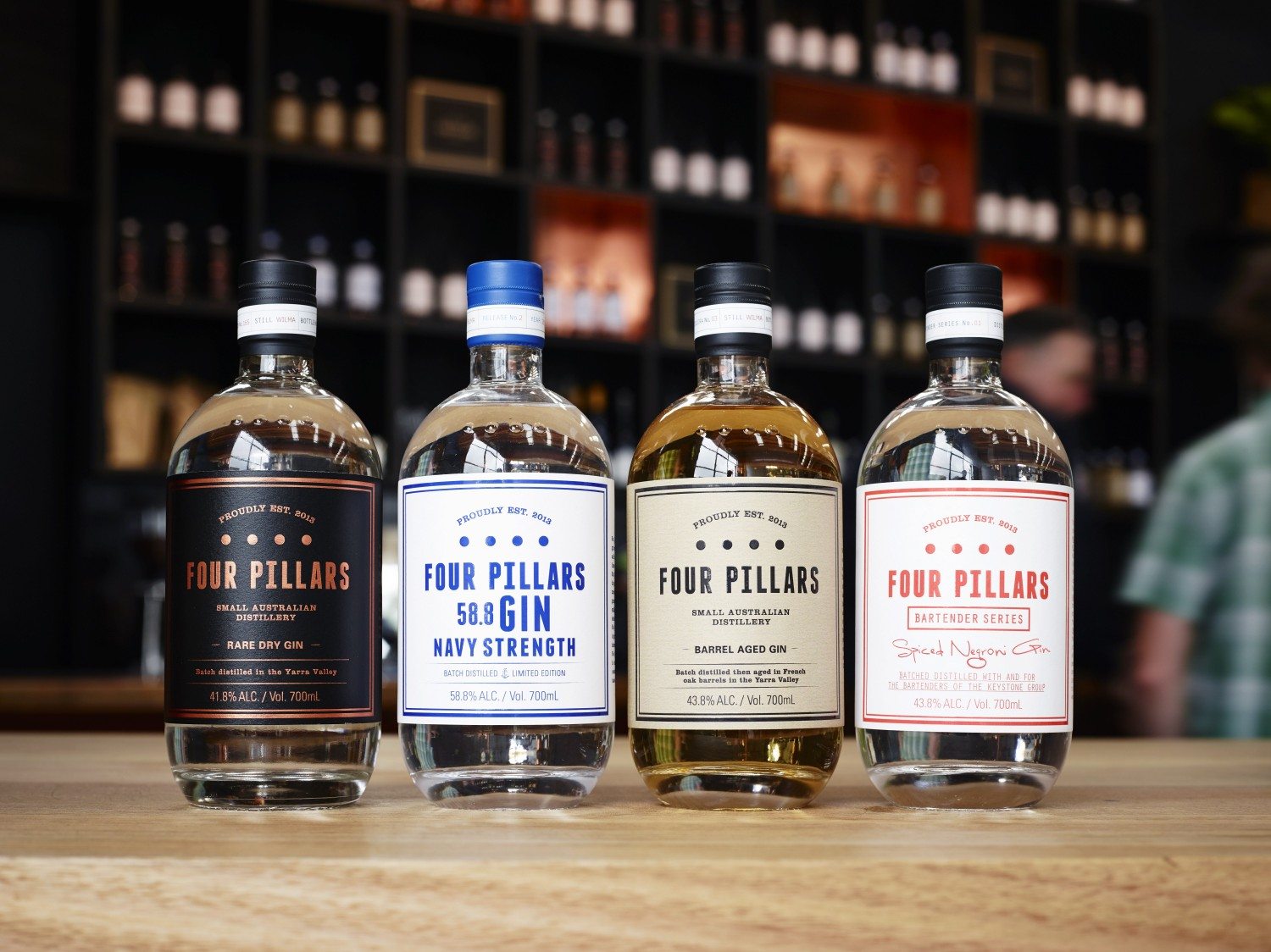 Finally catching up to craft beer in terms of popularity and distribution, quality-oriented craft liquors have been emerging from some interesting places as of late. One such example is Four Pillars Gin, which was brainstormed by Stuart Gregor and Cameron Mackenzie in 2012 and officially launched in December 2013. The company’s gin is made in its distillery in Australia’s Yarra Valley, a region generally known for producing high-quality wines. Geography aside, Four Pillars also stands out from other gins in using a German copper pot still within its production, capturing flavors from both Asia and the Mediterranean, and only making its gin in small batches; 460 numbered bottles are made at a time.

The internationally-acclaimed Australian craft gin finally makes its way to New York on May 29 with a launch party at Dante, as located at 79-81 Macdougal Street. Taking place over Memorial Day Weekend, Four Pillars is promising an “Australian Happy Hour,” which is always known to go for much longer than an hour. Stuart will be in town for this event, which kicks off at 5:00 PM. Following this, Four Pillars ought to be found in stores throughout New York City, thanks to a working relationship with Empire Wine and Spirits.

Stuart –- who is also the President of the Australian Distillers Association and the founder of Liquid Ideas –- kindly took the time to speak to Downtown about what’s ahead for Four Pillars Gin. The brand can be found online at www.fourpillarsgin.com.au and at @FourPillarsGin on Twitter. Stuart himself is on Twitter and has a website of his own at www.stuartgregor.com. Fingers are crossed that the Bloody Shiraz Gin he described is also on its way here in the near-future.

How would you describe Four Pillars Gin to someone who hasn’t tried it before?

Stuart Gregor: It’s what we call a Modern Australian gin, so it’s not another London Dry gin, but it’s a modern-style with a really great backbone of juniper and a bit of local Aussie botanicals alongside the best of Asia and Europe. It’s what modern Australia is all about really. Garnish with an orange, as we use whole oranges in the distillation process

Where did you work prior to Four Pillars Gin?

SG: I’ve been banging about the booze industry in Australia for more than 20 years, for the past 16 of it running my own PR/Marketing business called Liquid Ideas, which has worked with most of the great global spirits brands. Also, I have part-owned a small winery for more than a decade, have written six guide books to wine and a few other things. I’m old…really, really old…well, 47, to be honest.

Your distillery is in the Yarra Valley. Why there? Isn’t that area mostly known for wine?

SG: It’s there ’cause my business partner Cameron lives there. In fact, his home is less than 300 yards from the distillery. That, and it’s one of the most beautiful places in Australia and less than hour’s drive from Melbourne. It has incredible water, the winemakers of the region are a great coterie who we’ve known for many years. Healesville is one of the coolest food and drink destinations in Australia right now and it’s only getting better. Oh, and we found a giant shed that we could afford to buy. That wasn’t going to happen in Sydney!

As the President of the Australian Distillers Association, what can you tell me about your local industry? Is Australia becoming more of a go-to territory for spirits?

SG: Look, we are still a VERY small industry. There are around 70 operating distilleries in Australia and around 2,500 wineries, so we have a little ways to go. That said, we have some of the great bars and bartenders in the world – regularly with two bars in the world’s Top 10 and there is no reason we shouldn’t make some of the world’s great spirits. The Tassie guys are doing it with whiskey and we are now doing it with gin.

Unfortunately, a lot of people associate Australia with beer because of some old Foster’s commercials. What is your drink of choice?

SG: Beer, probably not Foster’s! Like most people in this industry, I drink pretty much everything – I love gin naturally, whiskeys from all over the world, good sessionable beer, great wines, and occasionally I will even drink something non-alcoholic. But I don’t intend on making it a habit. (laughs)

You have a launch event coming up in New York City. How did you choose Dante of all venues?

SG: We’ve known Linden, part-owner, and Naren, head bartender, for ages. It’s such a sensational bar with such a great sensibility and understanding of great cocktails, it was a bit of a no-brainer. And as the joint is full of Aussies, at least they understand our accents…

Any idea where Four Pillars Gin will be sold in New York besides Dante? Stores and bars?

SG: We are partnering with Empire Wine and Spirits, so we should have literally hundreds of outlets selling us by the end of the year. We will naturally have a focus on the bar scene, but we would expect to be in plenty of the better liquor stores and also the good restaurants around town.

Do you remember the first bar you ever visited in New York City?

SG: Nope. I don’t remember the first bar I visited in any city I’ve ever been. I don’t think you should. That, and it was 25 years ago! But last visit, I had a surprise shot of Australia’s infamous Bundaberg Rum at Employees Only –- I haven’t easily been able to forget that!

SG: In 2003, I went to lunch at Batali and Bastianich’s Lupa for the first time with a mate. I remember we’d knocked off two bottles of Chianti before the head cheese even arrived. Ripping lunch. I’ve had a bit of a man crush on Joe [Bastianich] since I read Restaurant Man. Never met him, of course – just a weird Aussie stalker thing from afar. (laughs)

Once Four Pillars has properly launched here in New York, what’s ahead for your company? Other spirits?

SG: We are a gin distillery – pure and simple. We are going to concentrate on making a great range of gins to show how awesome and versatile the greatest of all white spirits really is. One thing we are about to release, that will freak a few people out, is a product called Bloody Shiraz Gin. Think purple and spicy and sweet and ginny and shirazzy — all at the same time. Imagine Sloe Gin, but actually delicious and very, very Australian…

When you’re not busy with your spirits, how do you like to spend your free time?

SG: I’m a mad sports fan and will watch ANY sports any time of the day. Except tennis, I really don’t like tennis. Earlier in the year, I went to Super Bowl 50 –- I’m a Broncos fan — and next week I’m going to my first Mets game. And I love my Aussie Rules footy. Oh, and my two kids, Audrey, 12, and George, 10. They’re pretty cool, too.

Finally, Stuart, any last words for the kids?

SG: Mate, it’s a shocking cliché, but follow your dreams. Cam and I had been dreaming about opening a distillery for quite a few years before we bit the bullet, hired a car and drove from Portland to L.A. and visited every distillery on the way. They gave us so much encouragement that we went home and said “Bugger it, let’s do it.” And get a third partner with a brain, that’s where Matt came in. And here we are, about to launch in New York City, it’s pretty bloody cool.