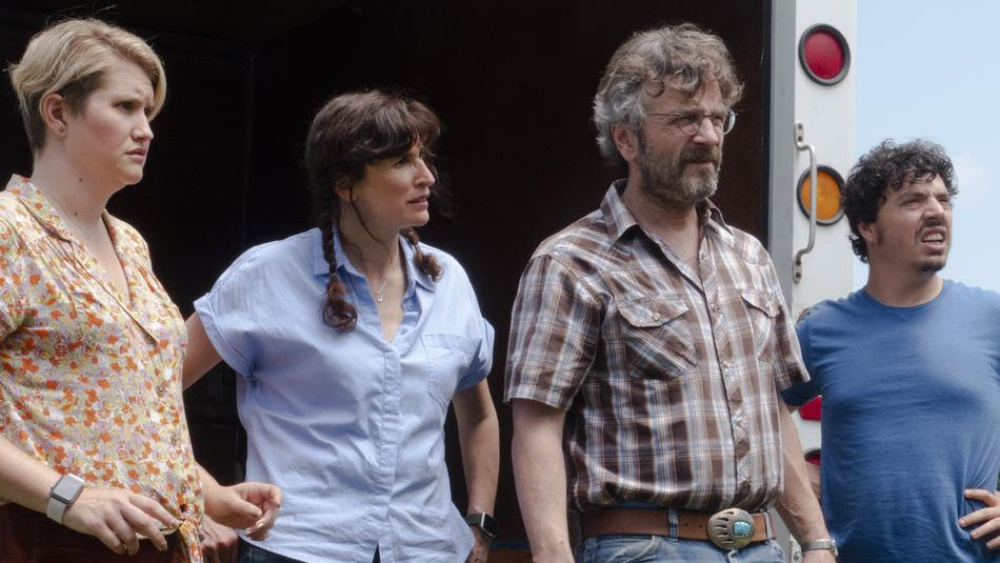 ‘Sword of Trust’ keeps it light and heartfelt in a timely tale about YouTube conspiracy theorists.

Few plotlines seem more relevant in today’s world than an encounter with Southern revisionist conspiracy theorists on the internet. What is lovely about Lynn Sheldon’s Sword of Trust is that it treats the plot as mundane, choosing instead to focus on the hidden hearts of characters struggling to get by. A moment played for laughs can turn deep or deadly, and Marc Maron steals the show with a semi-autobiographical monologue delivered from the back of a shag-rugged moving van owned by confederate truthers. The improv-heavy style of the film sometimes drags the plot, but even the slow moments are good for a laugh.

When couple Mary (Michaela Collins) and Cynthia (Jillian Bell) arrive in Birmingham to collect an inheritance from Cynthia’s deceased grandfather, they discover that a late-in-life reverse mortgage has left them with only three things: an old civil war sword, documents of authentication, and a dementia-addled note which seems to say that the sword is proof that the Confederacy really won the Civil War. They try to sell the sword to local pawn shop owner Mel (Marc Maron), a cynical skeptic, who low-balls them. A quick google search by Mel’s otherwise-useless assistant Nathaniel (Jon Bass) reveals that there is a whole sub-culture of Civil War “Truthers” willing to pay big bucks for “prover” artifacts like the sword. Mary, Cynthia, Mel, and Nathaniel have to team up to convince their shady buyers that they are carrying the real thing.

Sword of Trust has an entertaining, if often straightforward, plot. On the surface, the sword could be traded out for any other McGuffin, with any other secret society out to get it. You have seen a thousand of these movies. What sets Sword of Trust apart is the sharp improv skills by the central cast and the heart with which they take to their characters. You can feel the tinge of desperation and world-weariness that creeps across the edge of every decision they make. It is that same feeling that keeps you waking up early for a dead-end job day after day. The money isn’t for following their dreams; it’s just to help them get by.

It is also remarkable how mundane the “ancient artifact shadow government internet conspiracy theory” plot feels, both in the film and in today’s day and age. Where these kinds of conspiracy films once would have centered the plot on high drama and thrilling tension, many internet-dwelling viewers may have the feeling that they have already seen these videos on YouTube. Maybe they have encountered one of these guys on Facebook, a friend of a friend. This story could happen to any average American. In this film, it happens to four of them. The outlandish is now a slice of life, whether we like it or not.