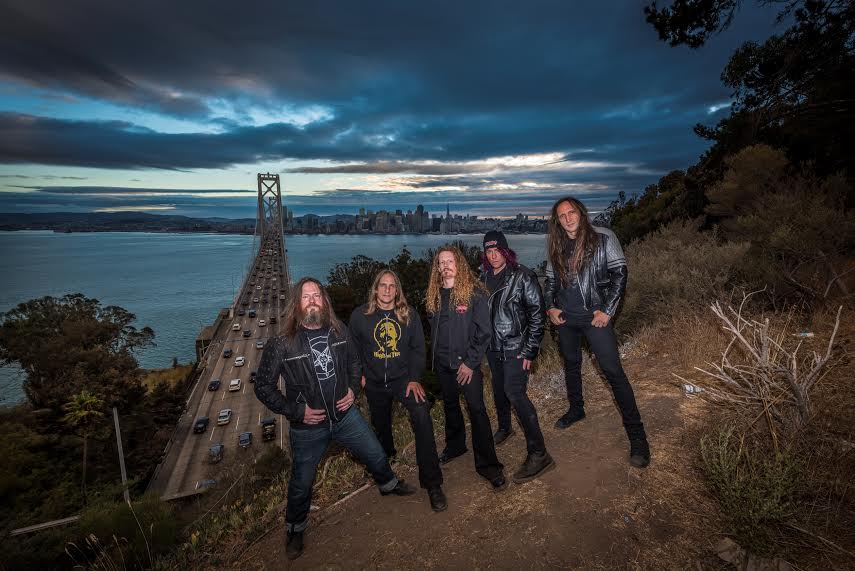 Pioneers of thrash metal, Exodus formed in 1979 with future Metallica guitarist Kirk Hammett in tow. A revolving door of sorts over the years, Exodus vocalist Steve “Zetro” Souza joined the band in 1986 for his first of three tenures with the band. Since Steve rejoined Exodus in 2014 for the group’s tenth album Blood In, Blood Out – which featured a reunion with the aforementioned Kirk – Exodus has arguably been in peak form, with rave reviews and big concert crowds being the end result.

In support of Blood In, Blood Out, Exodus comes to town for some high-profile appearances. Co-billing with the legendary King Diamond, two of their three shows at the Playstation Theater – Nov. 20 and 21 – are already sold out, while tickets are still available for Nov. 19. How many rock bands can you think of that can sell THAT many tickets these days?

I had the pleasure of doing Q&A with Steve, as set up by the fine folks at Adrenaline PR. Within such, I got a great story about Iggy Pop, an explanation of how Slayer plays into the next Exodus album, and why there’s never been a Steve solo release. For more on Steve and his projects beyond Exodus – like Hatriot, in which he collaborates with his sons Cody and Nick – his Twitter handle is @stevezetrosouza.

What do you wish more people knew about Exodus?

Steve “Zetro” Souza: I don’t think that anybody really needs to know anything that they don’t know already. We want just to be remembered as innovators of thrash metal.

After the House Of Blues in Anaheim ignorantly banned Exodus, did you find out about any Exodus fans that worked within Disney?

S: I never knew anyone personally, but Disney is a big company, so I am sure there are Exodus and heavy metal fans there.

Your upcoming New York City shows are probably the biggest shows that Exodus has played within the last 20 years. What do you attribute the recent rise in Exodus recognition to?

S: I think that Blood In, Blood Out, being our 10th album, is one of our best albums. It’s pretty much back to the original lineup. With my return, Gary being in the band, and Tom being in the band, it has that original appeal. Gary’s success in Slayer has also helped. There are a lot of people who never heard about Exodus, but are Slayer fans. Also, the band is playing the best that the band has ever played and I think people are recognizing that.

What do you remember about the first time that you played live in New York City?

S: It was at The Ritz and it was [the CMJ] New Music Seminar 1987. I remember we went on right before Voivod and Iggy Pop came to the dressing room and ate all of their after-show pizza! I remember Snake, the singer from Voivod, got PISSED. He thought Exodus ate his pizza, but we didn’t, it was Iggy Pop!

Is it true that the next Exodus album may not be released until 2017 at earliest?

S: I can’t give a timeline or anything, but because Gary is a big piece of Slayer now and they just released Repentless, he is going to be very busy on the road. Gary is a main songwriter, he wrote a lot of Blood In, Blood Out. I think it’s safe to say that it won’t be done before then, but I don’t really know.

Given that Exodus isn’t going to making a new album anytime soon, is there anything more planned for Dublin Death Patrol?

S: Chuck [Billy] and I are really busy. When I had Dublin Death Patrol, I only had Hatriot, but now I have Exodus and Chuck is also busy with Testament and his management company Breaking Bands LLC with [Adrenaline PR publicist] Maria Ferrero and [Megaforce Records founder] Jon Zazula. So to be honest, I don’t think there is any time for DDP. It was just supposed to be one record anyway.

S: I would have to say the same thing for TENET. My focus is Exodus and I am still writing for Hatriot even though my son is now the singer/bass player. They can go to Hatriotmetal.com and check it out – he sounds just like me.

You’re very prolific as a singer yet you’ve never put out a solo album. Why is that?

S: Because it takes a band of talented musicians. I wouldn’t feel comfortable just marketing myself – it’s not all about me. It’s about the band as a whole and everyone who is involved.

When you’re not busy with music, how do you like to spend your free time?

S: I like to watch sports. The Oakland Raiders, Oakland A’s…I like hockey, The Calgary Flames. I just got a new puppy in July, too.  I’ve also been riding my Harley this summer.

S: The new Iron Maiden, Book Of Souls. I like the new Slayer and the new Soilwork, but I have to say, Maiden brought it hard.

Finally, Steve, any last words for the kids?