Europe Dominates Irving Plaza with a New Album in Tow 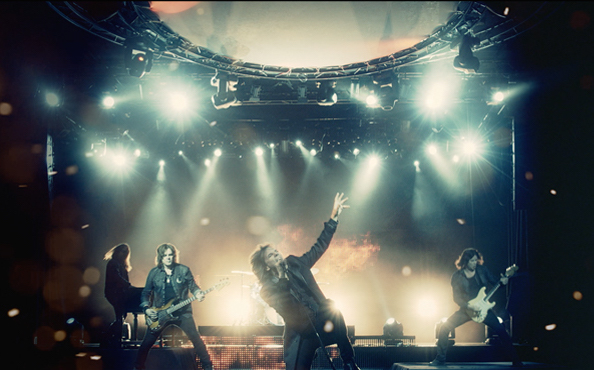 Whether you primarily know “The Final Countdown” as a song that went to #1 in 25 countries, for being regularly-licensed in TV and films (e.g. “Pitch Perfect,” “Arrested Development,” “Glee”), or through its dozens of cover versions, it is important to remember that Europe is still making a global impact 32 years after the release of its self-titled album. Early 2015 brought the release of Europe’s 10th studio album, “War Of Kings,” and the quintet’s first U.S. tour in quite a few years. The band packed Irving Plaza on April 30th with Black Star Riders and the similarly-named Blackfires also on the bill.

I was able to connect with frontman Joey Tempest – who will be featured in a later “Really Busy People column – between their Chicago and New York City tour stops to discuss Europe’s past, present and future. Downtown Magazine’s Darren Paltrowitz:

What do you wish more people knew about Europe?

Europe’s Joey Tempest: That we are probably the “tallest” five piece band in the world. (laughs)

How would you describe “War Of Kings” to someone only familiar with the “Final Countdown”-era of Europe?

J: “War Of Kings” is simply just part of our amazing journey. The same way “Final Countdown” was. It’s all an organic adventure for us. Nothing is really planned, apart from that we strive to dig deeper. We try and find new expressions that touch us and hopefully others.

You’ve said in other interviews that “War Of Kings” is the album that Europe always wanted to make.  As the 10th studio for Europe, does that set the bar too high for your next album?

J: Yeah (laughs), I might regret that one! Well, in a sense it really is. We wanted to make an album that had a “vibe,” an “atmosphere” and a depth that would remind us of some of the amazing records we grew up with. And it could not have been done without incorporating the thousand gigs we’ve done as a band. We are so proud of this record, it really is a record we always wanted to make and we could never have come close to this not even five years ago.

What should one of the attendees at Irving Plaza in New York City expect from your show on Thursday, April 30th?

J: Well, New York, being one of our favorite cities in the world, the whole band and crew are really up for this one! Coming off a great gig at the House Of Blues [in Chicago], we want to make sure to try and top that one. We will bring four or five new songs, which seem to be going down well on this U.S. tour. We will of course hit you guys with some well-known songs from “Out Of This World” and “Final Countdown.” There are some great live tracks from “Last Look At Eden” and “Bag Of Bones” as well. We’re having a great U.S. run this time and we want to make the New York show very special.

In having multiple platinum albums and having the international reputation as festival headliners, what is it that keeps a legendary band like Europe going?  Is there anything left to prove?

J: I guess it’s some sort of a SLOW BURNING OBSESSION that keeps the five us going. We try and keep the adventure going by constantly putting ourselves in new situations that hopefully brings the best out of us.

What’s the best thing about being Joey Tempest?

J: Being a frontman with these amazing musicians and childhood friends is simply the best job in the world. Eternal gratitude to our fans for keeping us in it!