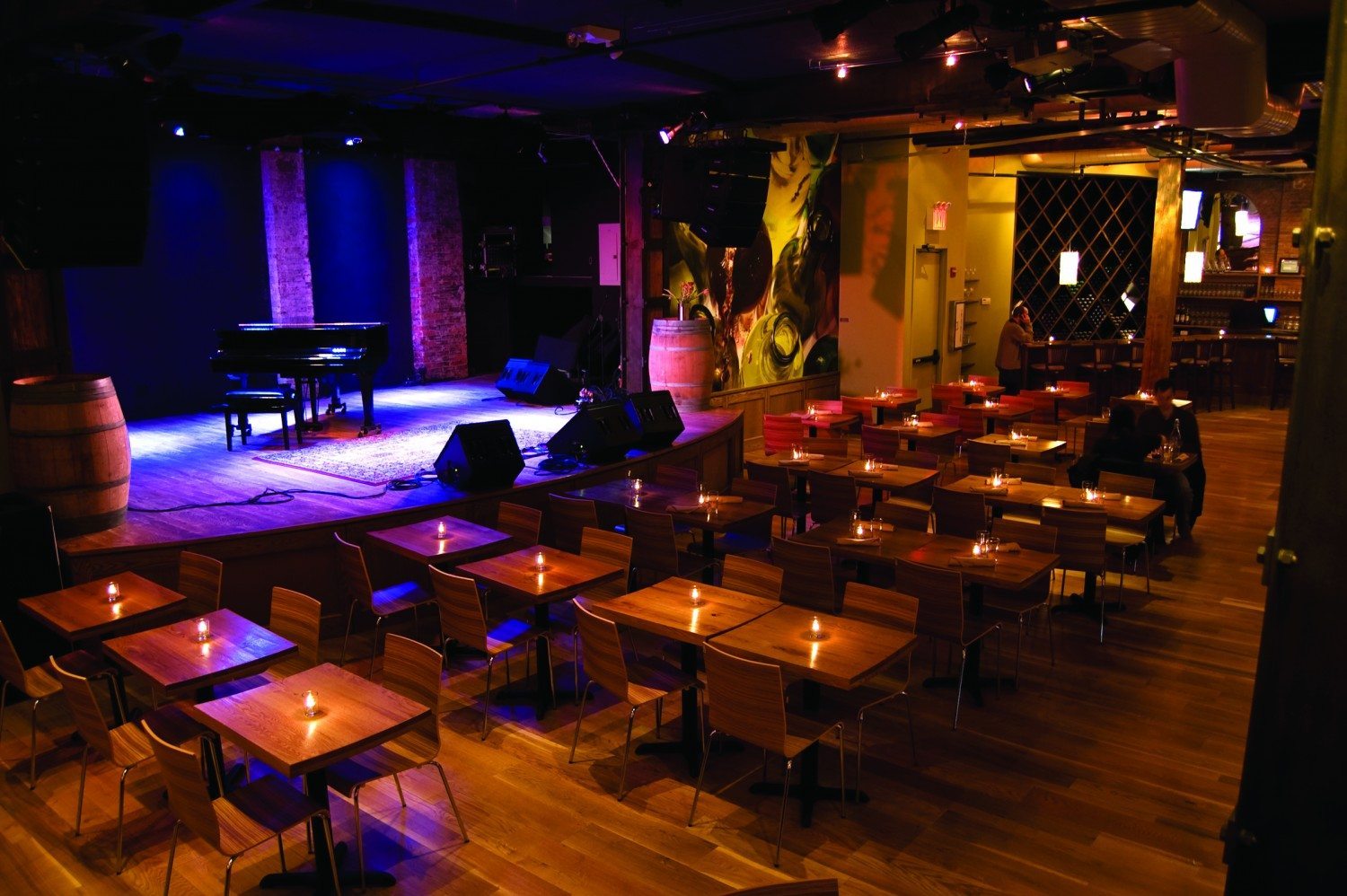 The Church Street School for Music and Art — as located in Tribeca — is the area’s only non-profit school for the arts. The institution has served the downtown and outer community since 1990. On Jan. 4, City Winery will be hosting a fundraiser for the school with plenty of stars present. Performers are scheduled to include Sugarland vocalist Jennifer Nettles, Sonic Youth guitarist Lee Ranaldo, screenwriter/producer Ed Burns, actor Harvey Keitel, DJ Spooky’s Antartica Symphony, and actor/author Eric Bogosian.

Downtown had the pleasure of conducting Q&A with not only Eric Bogosian in advance of the event, but also City Winery owner Michael Dorf and its marketing director Jillian Santella. Other performers at City Winery include Teddy Thompson (Jan. 1), Buster Poindexter (Jan. 13), Alejandro Escovedo (Jan. 19-21), Bettye Lavette (Jan. 29), and Marc Cohn (Feb. 14-15). Michael will also be presenting his annual benefit at Carnegie Hall on Mar. 6; this year will be a tribute to Aretha Franklin including performances by Todd Rundgren, Taj Mahal, Living Colour, Allen Stone, Kenny Loggins and Melissa Etheridge.

For tickets to the benefit show, click here. The Music Of Aretha Franklin at Carnegie Hall has a home at www.musicof.org. Eric Bogosian can be followed on Twitter via @Eric_Bogosian.

You have written and starred in plays, produced plays, written multiple published novels, appeared in a lot of film and television projects, and have even produced dance-related events. Do you have an easy way of describing how you earn a living?

Eric Bogosian: I describe myself as an author and actor.

Is there a particular project of yours that you are most proud of?

EB: The website 100monologues.com — currently featuring over 60 videotaped monologues by New York’s best actors — is a huge project we’ve been working on for over three years. I’ve very proud of it. We will keep building the site through 2018 when all 100 monologues will have been posted. The site is free and like I say, features many of the most popular and exciting actors who live and work in New York City. Take a look!

Do you remember the first show you ever attended at City Winery?

EB: I have never been to a show at City Winery. Michael and I go back to The Knitting Factory days. Because I don’t drink alcohol, City Winery has been off my beaten path.

What will you be doing at the Church Street School benefit? Any idea yet?

EB: I will perform a couple of monologues from the 100 Monologues.

City Winery is known for hosting a lot of benefits. Do you have specific criteria for when it comes to getting involved with a cause?

Michael Dorf: No criteria, there are so many issues in the world today. It is balancing out how we can spend our resources helping out. We have a platform to both raise money and awareness — I feel it is our responsibility to try and make the world a better place.

A lot of huge artists have played at City Winery in New York. I remember reading about Billie Joe from Green Day performing on-stage there. Gregg Allman had his recent residency…Is there anyone you’re still hoping will perform at City Winery?

MD: So many. We have a long list. I want Bonnie Raitt. We did a private show with Neil Young, would want that every night if we could. [Bob] Dylan, Bruce [Springsteen], oh yeah, Ryan Adams, how amazing would that be. How about a special night of Rihanna?

MD: Well, people have said, City Winery is a Knitting Factory for grown-ups. Yeah, there is some overlap. We had all standing shows mostly with a beer in-hand…That worked great then. Now being more calorie-conscious and having achey knees, I’d rather sit. It will be 30 years since I started The Knitting Factory and I guess both have worked in the lifecycle of myself downtown, serving many friends.

City Winery has locations in multiple cities. How involved are you in other cities’ locations?

MD: I run them all. And of course, when I say run, it is a great team running currently 750 employees growing to 1,000 employees in a year — take that Trump, that’s real job creation! I picked the name “City” so we could grow to many markets. Our business is very scalable and I am planning on aggressive growth over the next few years to more than 10 locations.

What is your favorite item on the City Winery food menu?

MD: A great burger goes with Bordeaux. But somedays I’m more in the mood for a white wine, so I go for a piece of fish. Our menu was really designed to complement your wine, not wine to go with your food. We inverted the typical process of ordering.

Do you have a go-to wine from the City Winery menu?

MD: No. There are so many different styles and favors, so much terroir. I’m a Pinot fan if forced to go to a deserted island thing.

Church Street School benefit aside, what’s coming up for you?

EB: My non-fiction book on Armenian assassins, Operation Nemesis, will come out in trade paperback in February via Little, Brown. Also I am guest starring in numerous episodes of The Get Down and Billions this coming season.

Jillian Santella: As always, we have music almost every night of the week! Some musical highlights in early 2017 include Art Garfunkel, Shawn Colvin’s January residency featuring Graham Nash, Richard Thompson and Patty Griffin, Josh Ritter and more. We’ve got a fantastic New Year’s Eve Party in our Barrel Room, featuring entertainment from Wasabassco Burlesque, open bar and light bites. In addition, we are open in the Barrel Room restaurant for dinner and drinks every day, lunch on weekdays and Sunday brunch — including a bottomless brunch drink option. We also have some exciting wine classes coming up, such as “Wine 101: Brunch & Wine Pairing” on Sunday, Jan. 8.

Will you be hosting another March benefit concert at Carnegie Hall in 2017?

MD: Yes, March 6 is the music of Aretha Franklin. It will be my 14th year raising money for music education programs, there are nine different organizations this year getting funds.

EB: Gardening, jigsaw puzzles and model airplanes. But I don’t think of my time as free or not free. It’s all one to me.

MD: I love giving interviews. I spend time with my family, kids. Two are now in college and one still in school downtown. She still likes me… I will admit that I like to golf when I can early mornings, hiking and being upstate when possible.

EB: I have lived in Tribeca for over 30 years. Our neighborhood was built on music, dance and art. It is our lifeblood. For me, children playing music is a symbol of peace and love between neighbors.

MD: Shit, does that mean I’m suppose to be an adult? I don’t feel like one. Nah. I think what Lisa [Ecklund-Flores] is doing at Church Street School is critical for the community. It is more than an after-school music program and also more than just serving a rich Tribeca community. In fact, I think being in Tribeca hurts the perception of them needing funding. They offer many scholarships and the teaching staff give much more time and effort than they are paid for. They are teaching kids to practice, giving them self-confidence, unleashing an inner creative streak that they might not have developed at home or regular school. They serve a very important role in our community, especially as more music programs get stripped away from public school budgets. Add to that the very challenging Tribeca real estate issues, which really don’t allow a non-profit — or many creative for-profits — to exist. Rent and getting enough space is a huge challenge for the arts, especially downtown. Right now, they are seriously-challenged and I hope this benefit helps them through part of it. I encourage all to come.