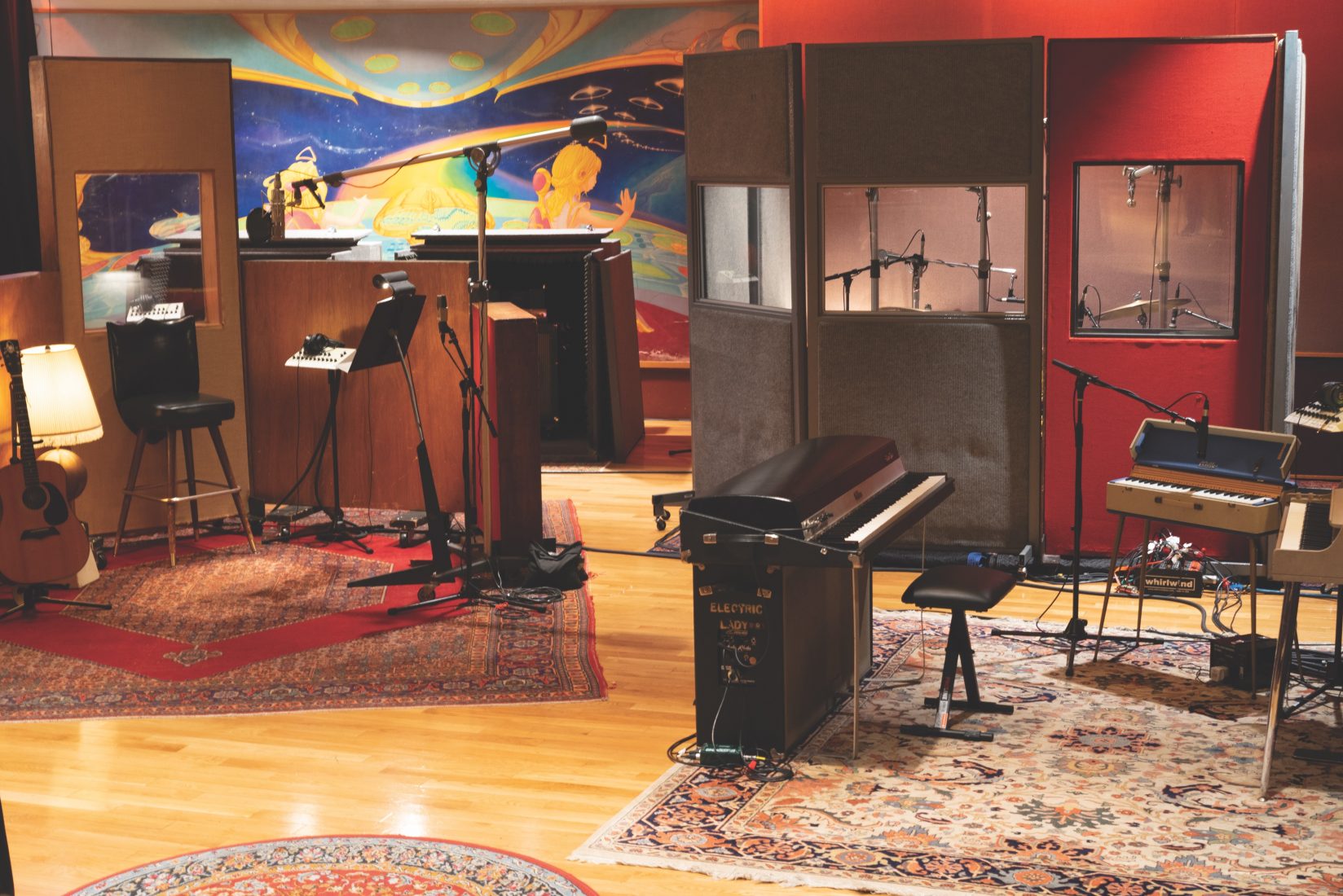 New York has more than its share of historic music spaces, from Carnegie Hall to The Village Vanguard. But the most mythical of these spaces sits in an unassuming little building on West 8th Street in the West Village-Electric Lady Studios.

“My tee shirt should read, ‘Serendipity’ because that really sums it up,” says John Storyk. His firm—WSDG—is celebrating its 50th anniversary, and we are sitting in one of the most legendary rooms in one of the most legendary recording studios in the world: Studio A of Electric Lady Studios. Storyk built this studio when he was just 22, and the project changed the trajectory of his life.

Electric Lady Studios was the brainchild of Jimi Hendrix and his UK manager, Michael Jeffery. The building was home to a blues club called Generation, where Hendrix sometimes played as a young man. Storyk, who was also a blues musician, frequented the club as well, but that isn’t where they met. “I was in a blues band and if you wanted to hear blues you came to New York.” He points out that he probably heard Jimi play, though he doesn’t remember specifically. Hendrix eventually bought the lease for the club. “I always thought he bought it to erase his bar bill,” laughs Storyk.

In the meantime, Storyk, who had graduated from Princeton with a degree in architecture, landed a gig to build an experimental club in SoHo. “I was on line to get ice cream and it was taking too long so I grabbed the East Village Other [an underground newspaper], and was checking out the classifieds. Remember those days? Now we just look at our phones.” He saw something that intrigued him. “There was an ad that said, ‘Wanted, carpenter to work for free in experimental nightclub.’ So I get my ice cream, put a dime in a pay phone and 30 minutes later I am on the Upper West Side with these two nuts who were talking about pods, and people changing into white robes, and there’s smoke and lights and all kinds of stuff.” They needed someone to build the club, and Storyk agreed, provided he could change the plans. The club, Cerebrum, was located in SoHo, and it opened in November 1968. In January 1969 it landed on the cover of LIFE Magazine. Cerebrum attracted New York’s bold-faced names, one of which was Jimi Hendrix. And still, they hadn’t met.

“I get this call from Michael Jeffery and he says, ‘Do you want to build a club for Jimi Hendrix?’ Jimi had been to Cerebrum. And I said ok. It seemed like a normal phone call. In retrospect it was not a normal phone call.” Storyk met with the team and started to design the club but at the last minute, Hendrix’s engineer, Eddie Kramer, talked them out of the club and into a recording studio instead. “It had a little control room already which was pretty unusual in 1968. So the club’s off and I wanted to kill Eddie. Now he’s one of my oldest friends and godfather to my daughter.”

Hendrix, Jeffery, and Kramer asked Storyk to design the studio that would become Electric Lady. “I didn’t know anything about recording studios, I had never even been in one. But they said, ‘Well maybe you can learn, fast.’” So Storyk read everything he could find on the subject and took classes at Columbia. Work started on the space in 1969 and a year later the studio opened.

It was a legendary summer for the young architect. In addition to working on the studio, he was also selected by Edward Schlossberg to participate in a 6-week program with architect and visionary, Buckminster Fuller. “Bucky had a program where he selected 20 students to come in and listen to lectures and then to work on developing his World Game Theory. Eddie had been to Cerebrum and suggested me. So every afternoon we would research subjects like how much energy you could get if you harnessed the Bay of Fundy. Stuff you can get from Google now.” Storyk reflects on his schedule at the time. “In the morning I’m going to school at Columbia. I’m building Jimi Hendrix’s studio, then I’m going to Bucky’s place just down the street. Then at night I’m hanging out in Fillmore East. This all seemed normal to me. It wasn’t until the 25th anniversary of Electric Lady that I took the time to reflect on all of this and appreciate just how special it was.”

50 years later, Storyk is looking back on a career that includes building studios, stadiums, and performance spaces for powerhouse clients such as Bruce Springsteen, Harry Connick Jr, Alicia Keys, Jazz at Lincoln Center, Carnegie Hall, and New York University to name just a few. He lectures at schools all over the country, and is an adjunct professor of acoustics and studio design at Berklee College of Music in Boston. “I love to teach and mentor young people but one thing I always tell them is that it helps, when making a career, to have your first project become famous. That’s serendipity.”