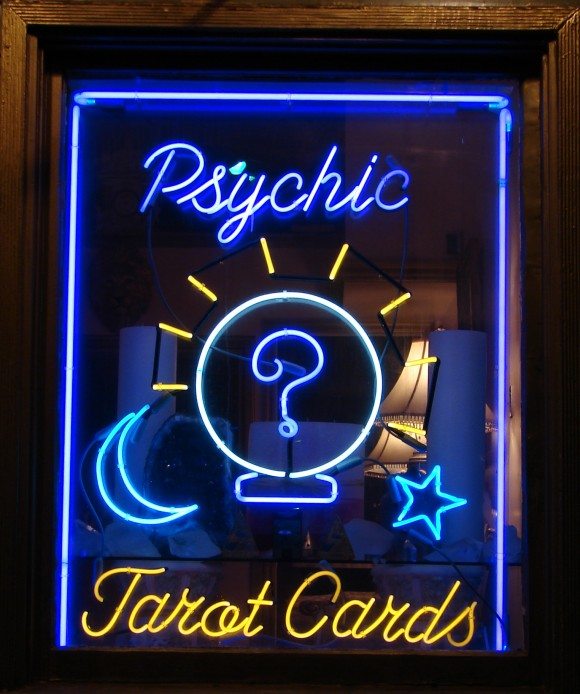 With the controversy surrounding psychics recently intensifying, chances are the neon signs advertising tarot card readings and psychic advisory that populate the sidewalks of downtown Manhattan have become less appealing. But aside from the crystal ball gazing, incense burning psychics promising good fortune in exchange for a small fortune, there are still a few good guys out there. Men like Mark Seltman and Michael Lutin also call downtown home and, despite being named to lists of the city’s top psychics, do not consider themselves psychics at all.

Seltman, a palm reader, and Lutin, an astrologer, use their skills and intuitions to provide clients with guidance rather than prophecy. Although their respective sessions do not come cheap, both assure that their practices are rooted in passion and a desire to help. In fact, an appointment with either Seltman or Lutin will feel more like counseling than anything else, relying on a healthy dialogue instead of a mystical mirage of your future.

Although recognized as a top psychic by both New York Magazine and Time Out New York, Mark Seltman’s private palm reading sessions do not consist of predictions. Palms reveal propensities, he says, explaining how his belief in a hand’s hidden messages does not conflict with his belief in free will. Contrary to popular perceptions of palm reading, Seltman aims to expose a range of possibilities, rather than reveal some predetermined fate.

“You have a lot of free will and no matter what you’re going through, you can choose how you want to see things or how you want to deal with them,” he explains. “I try to help people not to be victims.”

Seltman says the majority of his clients come to him because they are facing an issue, most often romantic or career-related, and seek some direction. In this way, Seltman considers himself more of a counselor than a reader.

“What I offer is a kind of reflection of a person’s basic character so that they can affirm or confirm whatever it is that they’re searching for,” he says.

A session with Seltman begins with a handshake, which, not surprisingly, reveals a great deal of information to the master of hands, who has read the palms of Katie Couric and Martha Stewart, just to name a few. Though private readings usually last about an hour and a half, Seltman never watches the clock or books appointments back to back, allowing him to take however much time he feels is necessary.

To begin, he takes a close look at the palm under a magnifying glass. Tens of thousands of hands later, Seltman can tell a lot from a first glance, he says. While specific questions make it easier for him to identify specific hand qualities, many clients come with nothing but sheer curiosity.

Generally, the palm reveals some major life occurrence that immediately stands out. From there, he goes with his gut and lets the conversation take its course. Seltman engages his client as quickly as possible, pointing to the lack of productivity in simply having a palm reader tell you about yourself.

Tarot cards and astrology are also incorporated into his readings.

Interestingly enough, Seltman does not encourage his clients to come back for frequent sessions. It’s one thing to identify the issues, he says, but working through them is its own process – one that he does not necessarily need to be a part of.

“Do the work first, and then we can talk about it,” he says. “No one has your answers. You might gain insights from other people, but you’ve got to gain your own stuff, too.”

As the palm reader poetically puts it, “its not about answers, I think its more about questions.”

And as for the skeptics: “I’m not here to prove anything. Take what works, leave what doesn’t. If it works for you, that’s what matters.”

“I can’t tell you where you left your shoes, and I don’t get in touch with your Aunt Maude who left us,” explains astrologist Michael Lutin. Though his knowledge of the stars does not necessarily provide him with supernatural powers, the highly regarded authority on all-things-horoscope notes that the better he gets to know a client and their chart, the more the door opens up, and the more he can see.

“I use astrology to tell people what’s really happening, to help them do better what they really love to do and make them laugh while they’re doing it.”

At the elegant fifth avenue office, clients are invited to take a seat in a large leather chair directly across from Lutin. The animated astrologist then sits back, rolls up his sleeves, and, with a grin, begins the session with a simple question: “So, what’s going on?”

From there, the only thing that will remind clients that they are with an astrologist and not a therapist is the crystal ball that rests untouched on the fabric-draped coffee table. While Lutin can anticipate a lot about a person’s character through his or her chart, like Seltman, he feels that would be unproductive, referring to the predictive stuff as “infantilizing.”

“Deep down people are very healthy,” says Lutin, explaining his philosophy on astrology. “They have perfectly good instincts – those instincts have been clouded by parents, school, church, government. So there’s a crust that’s formed around this brilliant personal instinct. I think my job is to poke holes in that so the light comes through. Then they don’t need astrology anymore; they’re restored to their belief in their own instincts.”

Clients generally come to Lutin with a question or an issue they would like to discuss, ultimately used as a launching pad to identify the other questions, which, Lutin insists, always exist.

Lutin blends his extensive knowledge of astrology with psychoanalytic techniques and, perhaps most importantly, wraps it all in good humor in order to help his clients gain perspective and address the deeper, underlying issues.

That is not to say, however, that Lutin believes in destiny. Rather, Lutin says that he lives his life by astrology until there is something he really wants to do, in which case, he follows his instinct and does it.

“I think some of it is your horoscope– you were born with this, your soul incarnated, that’s your birthday, there are certain limitations and opportunities you’re going to have, and the rest is up to you.”

Overall, through the hour-long sessions, Lutin aims to empower his clients to pursue what they love and reveal to them the opportunity for learning that comes with every experience, good or bad.

So while you may want to steer clear of the clairvoyants claiming supernatural powers, with some of palm reading and astrology’s most respected practitioners located downtown, a little sixth sense without the scam could still be in the cards.