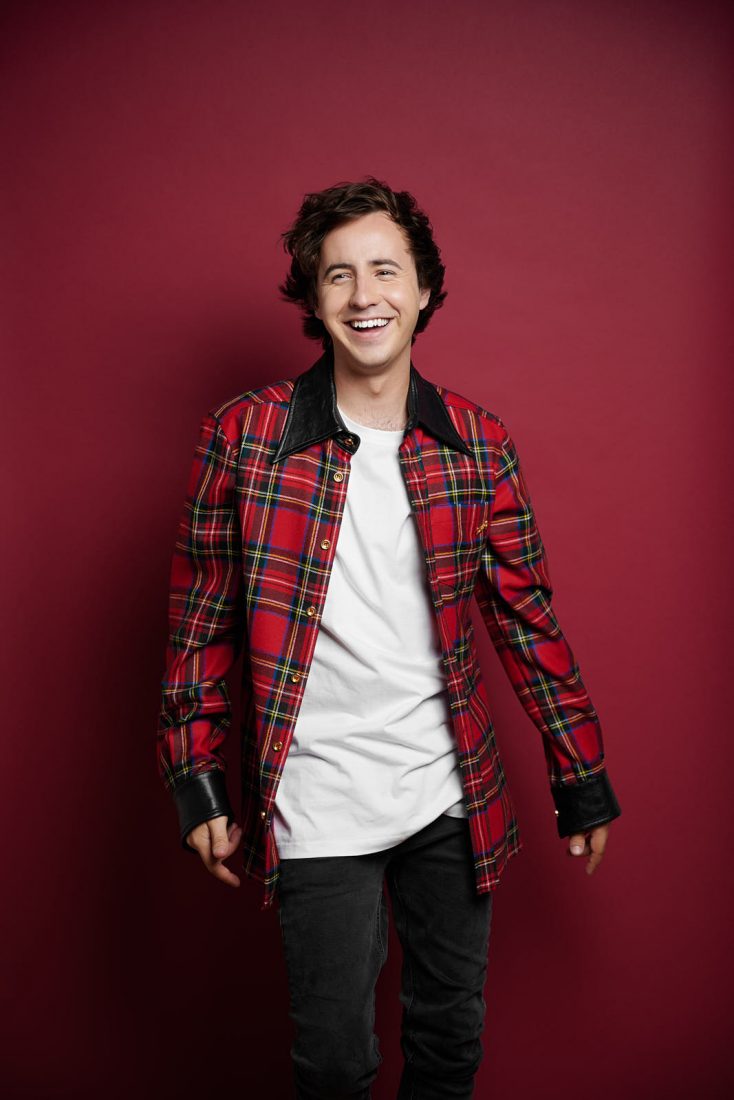 Downtown chats with actor Nicholas Coombe about his role in Dora and the Lost City of Gold, his acting journey, and his love for the arts.

Nicholas Coombe grew up in Perth, one of the world most isolated cities. From the time he was six, he has thrown himself into the performing arts: tap, jazz, ballet, acting, and musical theater. He loves singing, dancing, and playing music, but it was his acting which has taken him from Perth, Australia to Vancouver, Canada, where he lives now.

Coombe’s latest project, Dora and the Lost City of Gold, is set to come out tomorrow. He plays the role of Randy, an awkward high schooler who gets swept up in an adventure when his new classmate sets off to rescue her parents and solve the mystery of the lost city of gold.

Dan Metz: You’ve been in other films and television before. How was working on the set of Dora different from other productions you’ve worked on?

Nicholas Coombe: Honestly? This film was incredible. It’s definitely one of the biggest productions I’ve been a part of, which was really exciting. It was such a big project. There were so many incredible sets. The crew was massive. Everyone who was working on the film was renowned artists: the director James Bobin and the actors and actresses on the film. So it was really just an amazing experience. It was a larger scale than I’ve ever been a part of, and that was cool.

DM: There are some big names in Dora, and you got to work with a lot of them. How was that?

NC: Incredible. It was like a masterclass in acting. I spent a lot of time working with Eugenio Derbez and he’s like the king of comedy. He’s such a funny man. I learned a lot from him and we spent a lot of time improvising at each other and trying to make each other laugh. We made a pretty fun game of that.

Eva Longoria and Michael Peña, when they were there, were extremely nice people. They are extremely down to earth and they are hilarious and amazing performers. So just being able to stand across from them in a scene and witness them do their job was a really cool experience.

DM: What was your favorite part of working on Dora?

NC: I’d say the comedy, and also being able to film it in Australia. Because I’m Australian myself, it was really nice to go back to my home country, to be able to run through the jungle for four months and shoot a bunch of action sequences and be a jokester. It was a really cool opportunity.

DM: Where in Australia was it?

NC: We were filming on the Gold Coast, in Queensland. So we filmed a bunch in the studios out there, and then also in the surrounding jungle areas.

DM: So not exactly close to where you were living before.

NC: No. I’m originally from Perth, Western Australia, so it’s still a solid six-hour flight. But in saying that, my mom was a lot happier to catch a six-hour flight than a three-day trip to get to Canada.

DM: How did you get involved with Dora?

NC: Yeah. It was pretty life-changing.

DM: But you’ve been in all kinds of projects before. You’ve done voice acting with Spy Kids. You even directed and wrote a little bit a few years ago. That was cool.

NC: Yeah. I’ve been blessed to be a part of a bunch of different projects, like Spy Kids. I got to do the voiceover, which was awesome. I got to play an Australian in that, and I had a great time doing the accent.

I’ve dabbled in directing and writing. Cinema Town (a miniseries where Coombe wrote one episode and directed two) was one of my first projects. But I still have so much to learn, so it will probably be a while before I dive into that again. For now, I’m trying my best to make the most of every experience I have and learn.

DM: Would you be interested in doing more directing and writing eventually down the line?

NC: Yeah, in the future. At the moment I’m focused on acting, but down the line, I would love to write and direct my own movies. I love films like those by Wes Anderson. I think his movies are incredible and I love the idea of using colors and music to tell a story. So, if I do get into directing, I think that is the path I’d want to pursue.

DM: What are some of your dream roles?

NC: I have so many. I’ve always wanted to do a big epic fantasy franchise, like Lord of the Rings and Star Wars. I’ve also always loved war films, and that would be a really cool opportunity to tell one of those stories.

DM: What appeals to you about those two?

NC: I love fantasy and sci-fi. I grew up watching Star Wars. So ever since day one, it’s been like “One day I’d like to use a lightsaber.” And the idea of jumping into this alternate universe and telling different stories, and being able to play characters that are not like your everyday person, is a really fun experience and something that I hope to do.

DM: What’s the most fun role that you’ve played so far.

NC: Randy, in Dora. He’s a really funny guy. I found myself laughing in every scene. There’s a lot of improvisation; James Bobin let us do a lot of improvisation throughout the film. I found myself giggling a lot, or trying to keep a straight face while bantering back and forth with the other actors. Randy has been a dream, and I’ve had a blast messing around with him.

DM: What’s next for you after this movie?

NC: There are a bunch of things coming up in the pipeline that I can’t talk about yet.

The one thing I can talk about, though, is that I have a band. We’re called The Beanie Kids and we are recording and releasing an EP soon. I think our first song will be out in August. I’m very excited. These are songs that I’ve been writing ever since I was in high school. It’s really exciting to put them together and release them to the world.

DM: Do you see yourself staying in the Vancouver scene?

NC: Maybe. I would like to move to LA for a period of time. I’m not sure when, but it’s definitely on my options. The thing about film is that everything shoots everywhere around the world. So you never really know where you’re gonna end up, which is exciting.