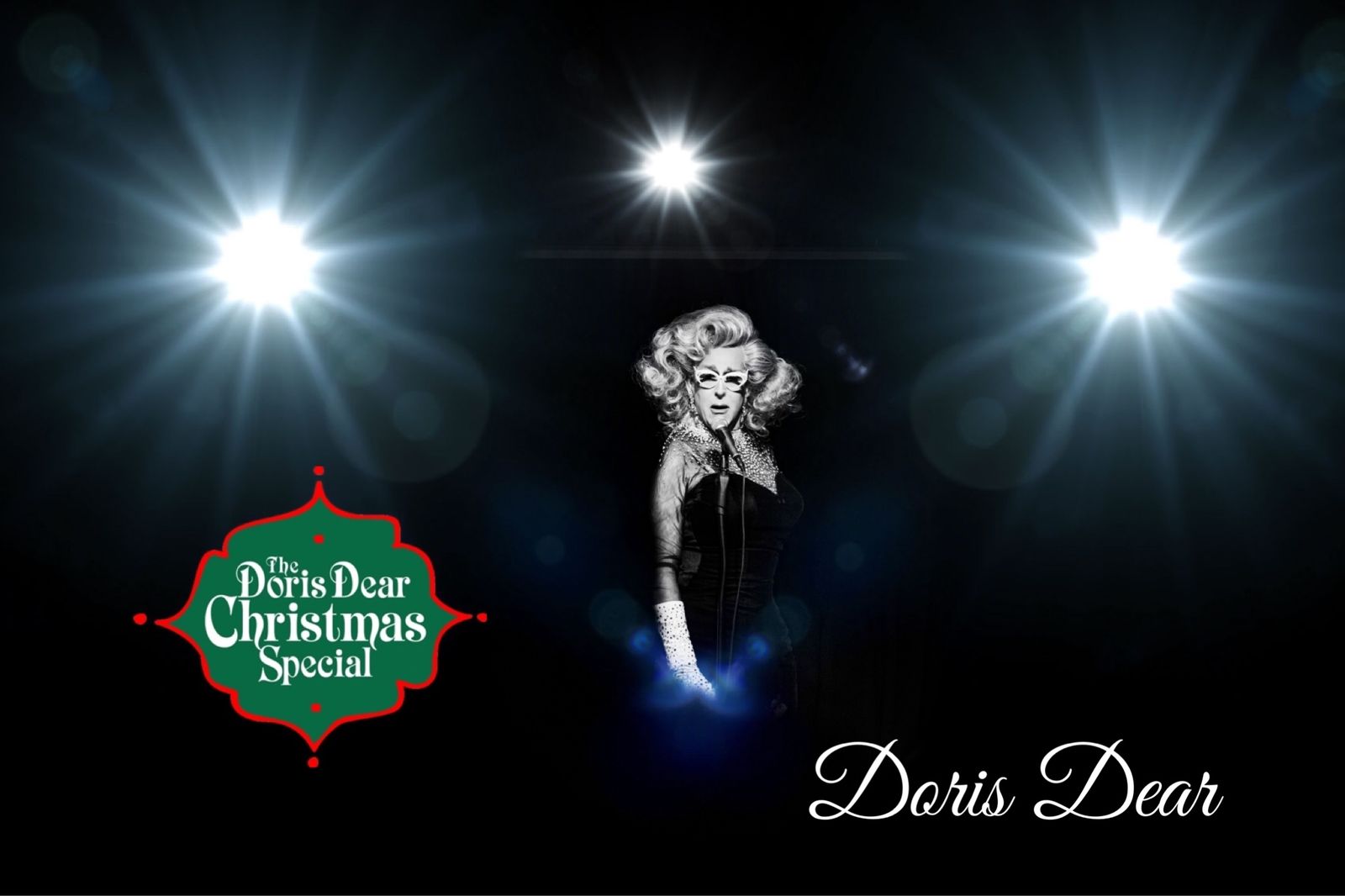 Ray DeForest was back at The Triad Theater with his now annual Christmas Party, “The Doris Dear Christmas Special.” This year, Doris performed to three nights of packed houses. Mr. DeForest is first and foremost an actor. He created the character of Doris Dear when his mother was slowly declining from Alzheimer’s and Ray wanted to salute the powerful woman he called mom. This year the show was also a fund raiser for The Alzheimer’s Association, New York Chapter. Mr. DeForest collected money after the shows and is donating a portion of the proceeds from the show. As Doris Dear said, “There comes a time in your life when giving back is more important than anything”.

This year’s show was all new. Starting with a rousing full cast number “Christmas Isn’t Christmas Till You Get Here”, we all knew we were going on a fun filled sleigh ride complete with sleigh bells! Doris of course sat down with a whiskey sour, lifted her glass with a funny toast and dished out holiday advice from her “bible of the American housewife,” Better Homes and Gardens, 1950’s style. From homemade aprons to gay decorations and parties, Doris Dear knows Christmas. We all look forward to Doris and her recollections of her parents Taffy and Duke, and this year was no exception. Doris gave us a heartfelt “I’ll Be Home for Christmas” which made us all happy to be in the rumpus room with Taffy, Duke and Doris.

Doris welcomed her usual mix of amazing singers and musicians to the Rumpus Room. Rick Jensen, Steve Doyle and Sean Harkness are all multi-talented musicians who are themselves successful solo performers that seem so in synch with Doris Dear, it’s hard to imagine them all not being together. Sean Harkness and his guitar playing is that glorious star on top of this delightful Christmas Tree. Lisa Yaeger joined Doris in a powerful duet, “Happy Days/Forget Your Troubles”. Their voices blend beautifully, and the audience cheered as their vocals both soared with the music. Lina Koutrakos, also Doris Dear’s director, joined Doris on stage to share some Greek Christmas with us and sang a heart wrenching “After the Holidays”. Lina has a voice that reaches inside you and grabs your heart and doesn’t let go. Of course, it wouldn’t be a Doris Dear Christmas show if Lina and Doris didn’t do their hilarious duet “I Wouldn’t Trade Christmas”, a Sinatra family favorite! One of the new additions to the Rumpus Room this year was the all-girl group “Those Girls”. Their “Jing-a-Ling” was so fun, and their tight harmonies so well executed, I felt like I didn’t want to ever leave this Rumpus Room.

Doris came out dramatically in an all-black rhinestoned gown to do her comedic take on the Rosemary Clooney song from the movie White Christmas, “Love You Didn’t Do Right By Me”. You never know where Doris will take us, and this number was no exception. Doris “brought the house down” with this old standard. Doris finished with an audience sing a long and then wrapped us in her holiday warmth with “Merry Christmas Darling”.

Ray DeForest is more than just another drag queen performer. There is no lip synching or cheap music tracks in these shows. His amazing vocals, extraordinary comedic talent, and subtle expressions consistently show us that there is more to drag than what we think. Mr. DeForest also writes the script and produces the entire show. This is family friendly fair full of advice, songs and laughs. After an evening in the rumpus room, you feel like Taffy and Duke are your friends and Doris Dear is your ultimate den mother. As I walked into the sparkling holiday lights of New York City, I knew that the world was going to be ok as long as Doris Dear had a say!