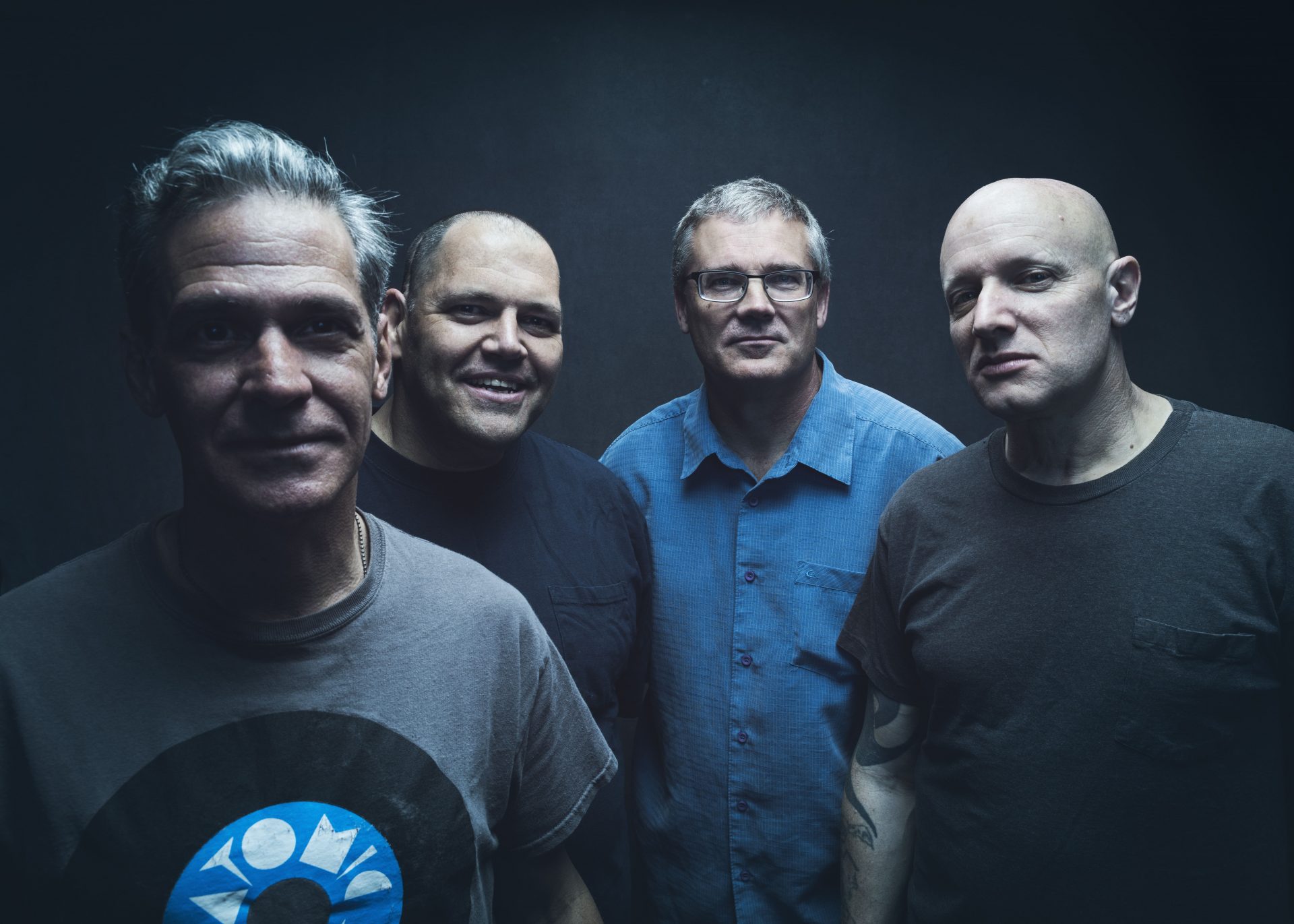 Formed in Manhattan Beach, California nearly 40 years ago, the Descendents have evolved into being one of punk’s most influential bands of all time. Blink-182, Sublime, FIDLAR, Mike Watt and YACHT are just a few of the artists that have recorded Descendents covers over the years. In spite of that widespread acclaim, the group has notably taken a number of hiatuses over the years, with the release years of its last three studio albums being 1996, 2004 and 2016.

A quartet comprised of four songwriters, things never slowed down for the members of the Descendents, as shown in its recent documentary, Filmage. Drummer Bill Stevenson has produced albums by NOFX, Rise Against, MxPx and The Lemonheads. Guitarist Stephen Egerton has collaborated with Bill on production projects beyond playing in bands like Auto Da Fe, 40Engine and The Seven Degrees Of Stephen Egerton; he also runs Armstrong Studios in Tulsa. Bassist Karl Alvarez has been part of Gogol Bordello, The Last, The Real McKenzies and Underminer at various points. The drummer, guitarist and bassist were also three-fourths of the band All, which released nine albums between 1988 and 2000, as frontman Milo Aukerman had left the Descendents in the mid-1980s to earn a doctorate in biology from University of California, San Diego.

In support of this year’s Hypercaffium Spazzinate — as recorded for long-time label Epitaph Records — the Descendents have returned to the road with a headlining tour. The New York City stop on the tour will take place on Oct. 8 at the PlayStation Theater. In support of that show, Milo spoke to Downtown. Milo and band can be followed via Tumblr, Twitter and Facebook.

Milo Aukerman: We played CBGB in 1985. Of course, we were in awe of the place, with all the punk history associated with it. I vividly remember the bathroom, which was a complete dump. You wanted to get in and out of there as fast as you can, except the graffiti in the bathroom was top-notch and deserved to be read, so I held my nose and stayed in there a while.

Do you remember the first time you heard your band being covered?

MA: I remember someone telling me Sublime had covered our song “Hope.” I hadn’t heard of Sublime, and in fact it took me a while to get into them. The self titled album is brilliant, and it got me to listen back to 40 Oz. Of Freedom, where I finally heard the cover. I guess it’s OK, although they do so many other covers better.

When The Descendents regrouped for some shows in 2010, you had been careful not to call it a reunion. Having put out a new album this year, is it still not a reunion?

MA: No, because we never split up in the first place. Sure, we took extremely long breaks, but because we are all lifelong friends it never felt like we’d “moved on.” And every time we have reconnected to do music, it has felt so natural and “preordained,” in a sense. So we don’t feel reunited, just tighter friends with each other!

Speaking of reunions, The Misfits — a band which formed around the time that The Descendents did — reunited with Glenn Danzig for a series of festivals. Is that a group that you ever shared a bill with?

MA: No. We didn’t have much contact with them back in the early 80’s because we hadn’t toured outside of California. Then they were already broken up by the time we were touring for real, in 1985 to 1987. I did get a chance to see them in 1982, with the Necros opening up, in San Diego. Very cool show.

Are there any bands that you are still hoping would reunite?

MA: First on the list would have to be the Cheifs, an L.A. band that existed in the late 70’s/early 80’s. They put out a single and contributed to a few compilation albums, and it’s all great punk rock. Check out Hollywest Crisis, it’s their entire collection of songs. Bill, our drummer, actually contacted the Cheifs about playing a reunion show. It was gonna be a surprise birthday for me a few years ago…but they couldn’t do it.

For someone thinking of coming to see your band at the PlayStation Theater, what’s to be expected? Will you be playing a lot from Hypercaffium Spazzinate?

MA: Yeah, we will do a handful of songs from the new record. It’s one of the reasons we made a record; we wanted to play some new stuff! Obviously, we still enjoy all the old classics, and we always will play those. Our set is usually pretty balanced between extremely-old, relatively-old, relatively-new, and brand new stuff.

MA: I’m very proud of this record; there are so many good songs. It makes it hard to pick a favorite! And of course your favorite can change over time. “Victim Of Me,” “Without Love,” “Smile”…Those are some of my current favorites.

When people think of The Descendents’ music, they most likely think of fast, melodic songs with memorable choruses. Is it ever challenging to come up with music like that?

MA: I can only speak for myself. We have four songwriters in the band, of course. It’s not hard to write a song, but to write a GOOD song, I do find that difficult. I know a lot of songwriters work on their “craft,” but I’ve never figured out how to do that. Most of the time, a melody or a lyric has to just come to me “out of the blue,” so to speak. That haphazard approach to songwriting has meant I’ve never been very prolific as a songwriter. Good thing there’s three other dudes to share the burden!

Do you feel that the documentary Filmage portrayed the band accurately?

MA: Yeah, it’s mostly based on interviews with us, so of course we get to set the record straight. In terms of the portrayal, I think Deedle and the boys really nailed the personality of the band, by injecting a ton of humor into the proceedings. And then that humor is balanced by the real-life drama of Bill and his health — and father issues. Bill and Tony are the stars of Filmage; they had me cracking up while I was watching it.

Is there anything you still hope to accomplish within music? For example, do you hope to get on The Tonight Show or a mainstream show like that at some point?

MA: That’s not so important to us right now. We’re OK skipping out on those more mainstream avenues; I think it would just make us uncomfortable. Personally, I’ve treated music as my hobby for most of my life, but right now I’m considering it my career, and that helps inform what I hope to accomplish over the next few years. For example, can I develop as a songwriter?

Also, can I learn to sing better so that my voice isn’t always blowing out on me? It seems rather mundane, but I take these as a big challenge, if only because of the old saying, “you can’t teach an old dog new tricks.” This old dog wants to prove them wrong.

Aside from your work in music, you are a biochemist. Do you often encounter people with punk rock backgrounds in your profession?

MA: Actually I left science in January of this year. Maybe I’ll go back to it later, maybe not…but as to your question, I had science colleagues who were fans of punk. We always had cool music playing in the lab. However, if by punk rock “backgrounds,” you mean someone in a band, I only know Greg Graffin and Dexter Holland. Greg does evolutionary biology, and Dexter does molecular biology. I’ve talked science with both of them, and it’s cool to know other science nerds that also play punk rock.

MA: With my wife and two kids, taking trips or just going to the beach. I’ll occasionally make it out to a show — but usually not with the family.

Finally, Milo, any last words for the kids?