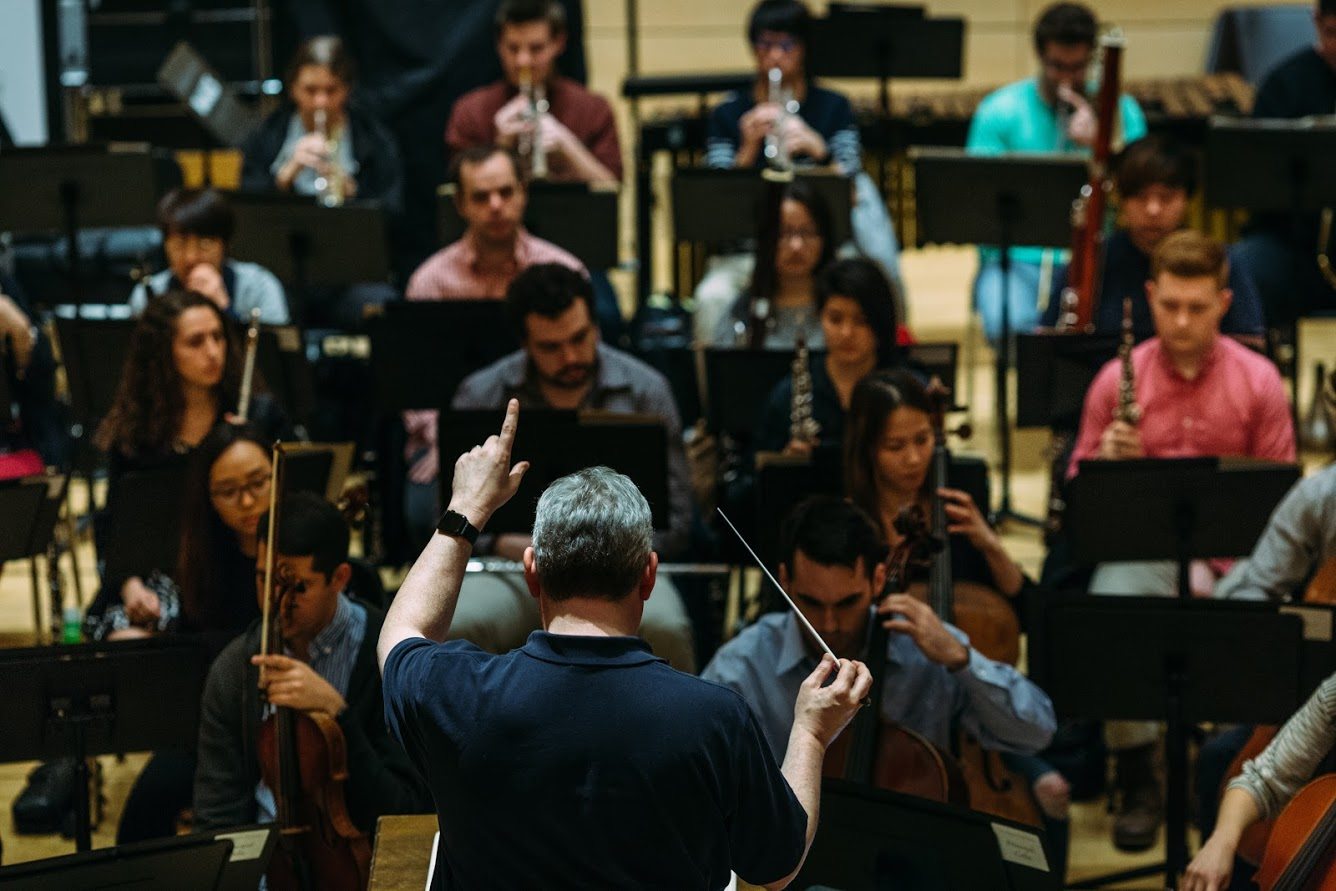 David Hayes is a skilled, versatile and prolific conductor. He is the Music Director of both the New York Choral Society and the Mannes Orchestra. He has also served on the conducting staff of The Philadelphia Orchestra and the New York Philharmonic. David has also overseen concerts for the European Center for Opera and Vocal Art, the Los Angeles Master Chorale, the Washington Chorus, and the Louisiana Philharmonic.

On Nov. 18, David will be conducting the Mannes Orchestra as they perform works by Bolcom, Ginastera and Harris. He caught up for some Q&A with Downtown earlier in the month to talk about his upcoming events and what actually got him to where he is today as an in-demand conductor. More info on David and other upcoming concerts can be found on The New School’s website.

What can you tell me about the upcoming event series for the Mannes School Of Music? Any particular events you are most excited about?

David Hayes: The entire year is a celebration of Mannes’ Centennial, so the events that are coming up not only celebrate Mannes’ history but also its present and future. We are focusing on composers, alumni and faculty — like our recent Alice Tully Hall Orchestra concert which was led by JoAnn Falletta (an alum) with music by Bohuslav Martinu (faculty in the 1950’s), as well as a cello concerto by composer Paul Moravec and played by Jeffrey Zeigler (both current faculty). We have exciting projects coming up with composer Kaija Saariaho (Composer-in-Residence this Fall) more music on the next Mannes orchestra by a former faculty member (Roy Harris’s 3rd Symphony) Mozart’s Cosí fan tutti, staged by our fabulous opera department, and then two exciting “movie” projects: “(Un) Silent Night featuring a live score played to Harold Lloyd’s Safety Last, and Howard Blake’s score to the beloved film The Snowman at the Metropolitan Museum of Art. And that’s just the Fall semester!

Where was the first Mannes-related event you ever worked on?

DH: I think the first Mannes Orchestra Concert I ever conducted was at Symphony Space, 96th & Broadway. Rhat was when the school was at its previous home on West 85th Street.

You are a Music Director for several organizations beyond Mannes. What else do you have coming up?

DH: I’m leading performances with the New York Choral Society at St. Patrick’s Cathedral on Nov. 9, the U.S. Premiere of a concert Mass by Maltese composer Joseph Vella, and then a Christmas Concert at Alice Tully Hall on Dec. 21st. We return to Carnegie Hall in February for music of Duruflé and Haydn and then give the New York City premiere of James MacMillan’s St. Luke Passion in April.

Was it always the plan for you to be a conductor? Were you ever focused on being a full-time instrumentalist?

DH: I always had it in the back of my mind that I wanted to conduct. So while I studied violin and viola and was playing a lot — tons of “gigging around” — my professional conducting life started taking off quickly after my graduation from the Curtis Institute of Music and I simply didn’t have to time to play anymore. So I never did work exclusively as a full-time instrumentalist.

Outside of the classical and orchestral realm, have you attended any concerts recently?

DH: Actually, no! My schedule is so jam-packed that I can barely keep up with my own rehearsals and performances. It’s really hard to find time to hear other concerts — much as I’d like to!

DH: Hmm, nothing specific that was released just this year. But I recently downloaded some performances of pianist William Kapell — seriously good playing!

DH: I read a LOT. Besides that? going on long walks down the East River Promenade and binge-watching Gotham and Stranger Things!

DH: I adored the Beacon restaurant on 55th near 6th Avenue, but it closed. My current favorite is Vic’s on Great Jones Street — wonderful food!

Finally, David, any last words for the kids?

DH: My simplest advice is “truly love what you do.” This is a very hard life, with lots of sacrifices. The only way it makes sense is if you love it so much that you can’t imagine ever doing anything else. If you have that fire inside, you at least have the possibility of success!