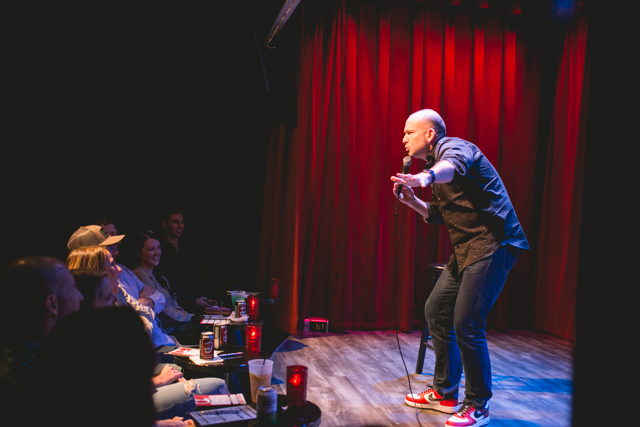 A lot of comedians have uncommon career paths (think Dr. Ken Jeong), but unlike Paul Ollinger, not many of them cannot say that they have an Ivy League MBA or worked at Yahoo! and Facebook. We chatted with the Atlanta-based comedian about his career transition, what his family thinks, and his brand new podcast, Crazy Money. New Yorkers can see Paul’s headlining debut at the legendary Caroline’s on Broadway this Wednesday at 7:30.

Downtown: Were you always a funny person?

Paul Ollinger: As one of six kids in my family, I only got 17% of my parents attention (rounding up). I had to fight for air time at our dinner table, so I hammed it up or said outrageous things to get a disproportionate number of eyes and ears pointed in my direction.

Downtown: What was the decision like leaving your corporate job to try stand up?

PO: I’ve done it twice. I left Yahoo! in 2005 (when I was single) and hosted every weekend at The Improv’s Orange County clubs in California. After two years, I got engaged, and decided I should probably go back to the corporate world (my future father-in-law agreed). In 2007, I joined a 250 person company called “Facebook,” which eventually empowered me to do whatever I wanted to with my career. Comedy was still my dream, but I feared failure and didn’t know how to get back into it. I dragged my feet, but in 2014, I started back at the open mics where I could bomb in anonymity until I earned my way onto the bigger stages.

Downtown: Who are some of your comedy inspirations?

Downtown: How did being in the corporate world help you in the comedy world?

PO: My corporate career earned me the financial flexibility to follow my dream without sacrificing any of my family’s needs. There is no substitute for putting in the reps, but I’d be kidding myself if I didn’t acknowledge how much of an advantage having a nest egg is. I can afford to work as an out-of-town club’s feature act (the middle person on the show) that pays $300, or -$600, net of travel. There are plenty of other ways my corporate experience helps, but I don’t think I’d be doing this if I didn’t know how I was going to pay for my kids’ college education.

Downtown: What did your family say when you decided to go into comedy?

PO: I met my wife in the showroom at Caroline’s on Broadway. On our first date, I told her that I was going to quit my job at Yahoo! and pursue comedy. So it’s been there from the beginning, and – at the very least – I gave her an easy-out! In all seriousness, she has been nothing but supportive. She is okay with me telling jokes about our relationship onstage and is the first one to say “go for it,” when a new opportunity arises.

Downtown: Does she think you’re funny?

PO: Does any wife think her husband of a decade plus is funny?

Downtown: How did you decide to launch a podcast?

PO: I launched the Crazy Money podcast to explore how our relationship with money leads us towards or away from contentment in our careers, relationships and life in general. Having longed for wealth my whole life, its arrival was very different than I expected it to be. Awesome, but different, and I made a lot of mistakes. The show is a lighthearted approach to an important topic. I’ve already recorded episodes with Dr. Drew Pinsky (Loveline, Celebrity Rehab), three New York Times best-selling authors, and Ed Roland, the lead singer of Collective Soul. Find it on iTunes, Spotify, and Stitcher.

Downtown: What have you learned about yourself through your comedy journey?

PO: Chasing your dream is a huge privilege, but it’s freakin’ hard. To get good at a new craft, you have to suck at it for a long time first. Sucking isn’t fun, especially when you’re in middle age and were pretty good at whatever you were doing before. But there’s no avoiding the suck. You have to steer into it, and blast through it.

PO: 1. Continue to improve as a dad, husband, comedian, and podcaster. 2. Be grateful for every day.