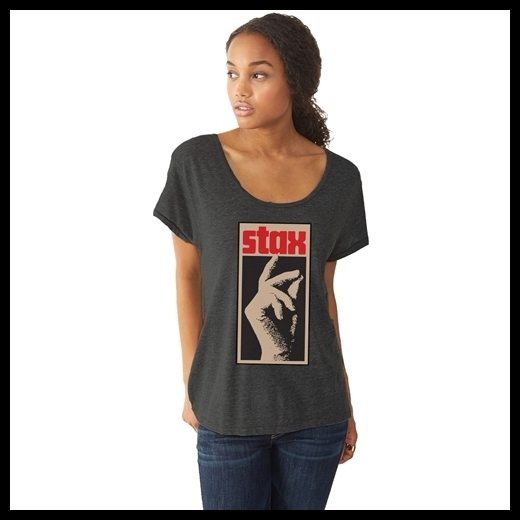 What do the blues, baseball and stand-up comedy have in common? Besides all of these concepts being entertaining to many millions of people, they are all undeniably art forms that originated in the United States. Without the blues there would be no rock & roll, and in turn, no hip-hop.

Bluescentric was formed in 2009 to fill the niche of there being “no online resource for people passionate about roots, rock & roll, blues and soul music.” Founder Matt Marshall started Bluescentric as part of a college project, putting his computer programming skills to work. Several years later, Matt changed the direction of Bluescentric, making it the seller of officially-licensed merchandise from legendary musicians and record labels. Bluescentric partners include the estates of Otis Redding, Bo Diddley, Howlin’ Wolf, John Lee Hooker and Johnny Winter. The company also follows many green initiatives, even using recyclable packaging to ship its orders.

Downtown spoke to CEO Matt Marshall prior to the company’s holiday season rush. While based in Missouri, Matt is very familiar with New York, as he constantly checks out live music in other states. Beyond keeping up a website at www.bluescentric.com, Bluescentric can be followed on Twitter, Instagram, Facebook and Pinterest.

How would you describe Bluescentric to someone who hasn’t visited the site before?

How exactly did you go from being a computer programmer to the head of Bluescentric?

MM: I was always a business-minded entrepreneur. The programming came in handy because I actually wrote the first Bluescentric.com store from scratch. The website started as a college project that kind of of got out of hand…but there was this worldwide group of passionate fans of this American music culture that were really being ignored. So we set out to give music lovers quality apparel that would help express their love of American “roots” music, in the broad strokes of Americana, blues, soul, R&B and rock & roll. After shipping tens of thousands of tees to 70 countries, it’s awesome to keep discovering how many other diverse, music-minded people are out there.

Do you have a favorite item of what’s sold by Bluescentric?

MM: I’ve got a closet full of favorites, but lately our old soul music tees are too fun. Coincidentally and all at once, we got serious soul power: Stax Records, Otis Redding, Memphis Horns, Shaft, the whole party.

Before Bluescentric even existed, I was making pilgrimages to the Stax Museum in Memphis to stand on the hallowed studio ground where Otis was cutting “Dock Of The Bay.” Now every day we ship old soul tees to other blues pilgrims in Memphis, Brooklyn, Tokyo, France…It’s a special thrill to get to harness our excellent creative department on music so impactful.

Are any of your licensors or artists based in New York?

MM: The late Bo Diddley — the originator and the man who some say invented rock & roll. We also work with a couple licensing agencies in the city, like Perryscope Productions.

Do you have a favorite concert venue in New York?

MM: Terra Blues is a great little music club. Brooklyn Bowl books some of the best roots-leaning acts touring today, and the concept is too cool. We’re stageside for Grace Potter and that deadly Flying V of hers while somehow bowling on lane five. I’ve always wanted to go to The Beacon [Theatre].

Your company ships its items from Missouri, which is a lot closer to the origin of the blues than New York. Where did your appreciation for the blues first come from?

MM: My earliest memories were glued to oldies radio and digging into dad’s records, so the blues was a natural progression — or foundation, depending how you look at it. However, the name of the shop more subtly reflects that popular music today, in one way or another, is really all the blues.

There’s a whole subculture argument on what is and isn’t “blues music” — but between people like Janis Joplin and Big Mama Thornton, both lived it, both sang it in a way people simply cannot forget. Who are we to cast the first stone at which invisible boxes “art” falls into? Rap, soul, country, R&B, rock & roll, punk, et. al. grew with-and-from the “mother earth” of this Mississippi Delta blues, gospel, and work song music foundation.

What about the green initiative of your company? Was your environmentalism inspired by a particular person or event?

MM: Each American produces about 1,500 pounds of waste every year, which is frighteningly almost 170% more than we produced in 1960 — and there’s a lot more of us. Whew, it adds up quick. And it doesn’t magically disappear. I’m frightened about the way we treat the environment as a whole, and frightened at the rate which we’re killing the other animals who have a right to be here because we want microbeads in our toothpaste and plastic bottles of water.

I want my future children or whoever’s behind me to live in a better world. Just as with rent and power, a business owes its stakeholders a common-sense conservation plan and a policy that strives to make no negative impact on the environment in which it exists. We’re fortunate that our processes create low impact and, thanks to our town’s recycling policy, our waste is easily recyclable.

What is coming up for Bluescentric? Any new collections in the works?

For someone to become affiliated with Bluescentric in terms of licensing or selling merchandise, what should they do? Is there criteria to be sold on the site?

MM: We do have a narrow set of criteria when considering licensees. Each artist is different and caters to different markets. Often we work with “deceased musicians.” We opened the business of selling licensed artist tees because there were a lot of these incredible artists who had passed away, and eventually, merch wasn’t being produced for their fans or maybe never was to begin with, and because of that, bootleggers were filling some of the demand.

I once saw a bootleg tee sell $5,000 in merchandise online in days, then disappear before anyone caught them. Maybe 40% of that went straight into the pocket of a thief in eastern Europe, and 0% went to Howlin’ Wolf. In contrast, by the end of next year, we’ll have probably sent Howlin’ Wolf’s estate alone $5,000. When you buy an artist tee, especially online, it’s good to make sure it’s officially-licensed. Money made by the estates goes directly to family members, helps preserve the legacy of the musician you love, and funds artist’s non-for-profits that buys instruments for children, funds musical scholarships and more.

When not busy with Bluescentric, how do you like to spend your free time?

MM: I just got an ancient stand-up piano that I can suffer pretty good, and then there’s the record store tax. I enjoy a lot of cooking. My girlfriend and I travel for music pretty frequently. This year, we got stuck in a hailstorm to the music of Steely Dan in Red Rocks, Colorado. That’s an experience even Ticketmaster couldn’t tack a stupid fee onto.

MM: That’s probably an unanswerable question; this has been my year for dream shows. Favorites: Sturgill Simpson, Vulfpeck, Buddy Guy, Nathaniel Rateliff, St. Paul and the Broken Bones, Big Chief Monk Boudreaux and his Mardi Gras indians at Jazzfest — looking the prettiest in their full feather suits. There was Dr. Lonnie Smith, a brilliant jazzy B3 player extraordinaire. My girlfriend and I caught Lee “Scratch” Perry, this brilliant and super funky dub and reggae founder and luminary, in this old basement venue. That was an unforgettable experience I’d pay to see over and over.

MM: I’ve loved this popular “reaffirmation of love” for soulful music lately, with acts making popular and creatively groundbreaking “new old soul” music. Nathaniel Rateliff & The Night Sweats’ self-titled album is both fresh and still just smells like the horns and funk and gospel and sweat in those legendary 60s all-night Memphis jams. And they’re on Stax Records, the label that invented soul. Full circle. Also, I hear he’s a Missouri boy, born an hour down the road from our office, so he must be alright.