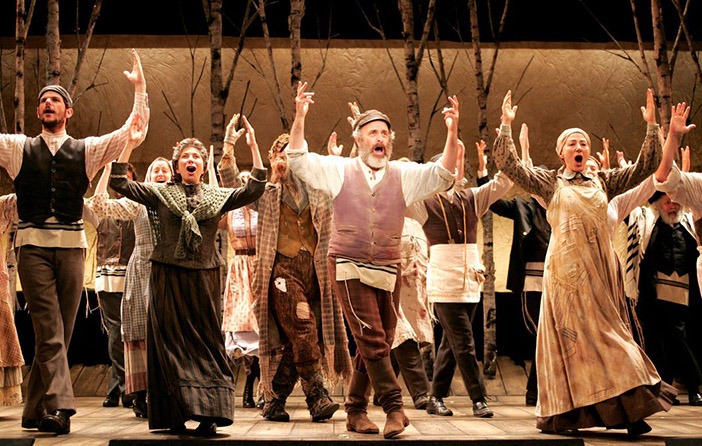 Today thousands of hopefuls will begin to line up at the Actors Equity Audition Center for a chance to be seen for the National Yiddish Theatre Folksbiene American Premiere of the Yiddish language Fiddler on the Roof, and as casting began, the highly-anticipated production, helmed by Academy Award and Tony Award winner Joel Grey, also unveiled its full all-star creative team.

“With the drive for artistic excellence found amongst our creative team, the American Premiere of Fiddler on the Roof in Yiddish aims to give audiences an authentic, exhilarating, and universally resonant experience,” said Folksbiene’s Chief Executive Officer and two-time Tony Award-nominated producer Christopher Massimine. “It is our goal to use the Jewish experience to bridge heritage and identity to the widest walks of life.”

Presented professionally in Yiddish for the first time in over 50 years, since its world premiere in Israel, this historic production is collaborating with the Dog Green Productions and the official Fiddler on the Roof documentary: Fiddler, which will depict the musical’s journey from Sholem Aleichem to the modern stage. The film will highlight the unique nature of this American Premiere of the Yiddish translation.

“The Yiddish translation connects the masterpiece by Jerry Bock, Sheldon Harnick, and Joseph Stein to the source material by Sholem Aleichem in a very moving way.  It enriches the way that an audience in 2018 will understand the culture, language, and customs which sustained the Jewish people for a thousand years in Eastern Europe and how modernization forever changed it,” said Folksbiene Artistic Director Zalmen Mlotek.

Fiddler On The Roof features music by Jerry Bock, lyrics by Sheldon Harnick, and book by Joseph Stein. The original Broadway production of the show, which opened in 1964, was the first musical theatre production in history to surpass 3,000 performances; the show won the Tony Award for Best Musical as well as eight other Tony Awards in 1965, and since has been performed in every metropolitan city in the world, from Paris to Beijing.

The Yiddish translation was artfully constructed by noted Israeli actor/director Shraga Friedman in 1965 and deepens the connection of the work to Sholem Aleichem’s original Tevye the Dairyman stories. Friedman, a native Yiddish speaker, was born in Warsaw and escaped the 2nd World War with his family, making their way to Tel Aviv in 1941. Well acquainted with Sholem Aleichem’s works, Friedman crafted his translation to infuse Fiddler with literary references from the original Tevye the Dairyman stories.

April marks the final month for discounted pre-sale ticket rates—ticket prices will increase May 1st. Fiddler on The Roof performances will run from July 4th through August 26th. Tickets to previews of Fiddler on the Roof start at $45, and performance tickets start at $50.

The show will be presented in Yiddish with English and Russian supertitles. Press Opening is on July 15th and the VIP Official Opening Gala Performance on July 16th.