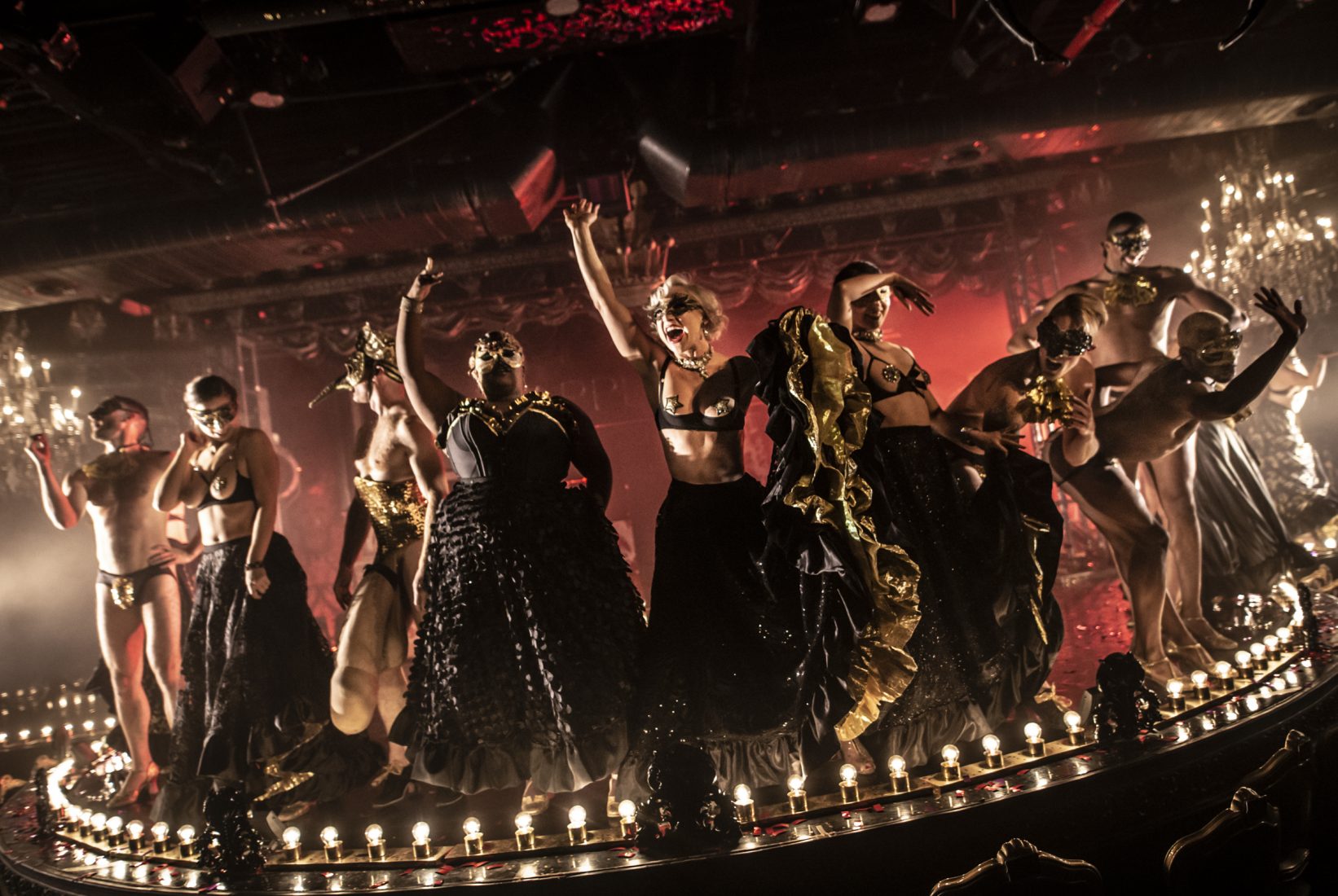 Are you looking for that last bit of holiday cheer? It is hiding in Bushwick. From the outside, Theatre XIV blends in with its industrial surroundings: a simple door and a dozen feet of black wall covered in posters. Your only real hint, unless there is a line outside, is the bright red enigmatic glowing sign that reads “XIV.” IT looks like a total dive.

Step through the door, though, and you will find yourself in another place and time. Decadent camp fills the foyer like 17th century Versailles put on a showing of Rocky Horror Picture Show. The decor is wood and velvet, oriental rugs and chandeliers. Guests, mostly dressed in black, mingle with cast members decked out in gold, sequins, and fur. Between them, there is hardly an eye left unlined.

The theatre itself is a black box, but you won’t notice. Behind the terraced half-circle seating, a realistic tree stretches out snarling branches as if to give shade. To one side as you enter, a long wooden bar a century out of time offers a wide selection of alcohol beneath a shimmering chandelier.

But the most arresting sight is the stage itself, which thrusts out into the crowd ringed by bare bulbs and flanked by even more chandeliers. The curtain, when down, displays a decadent scene of French aristocracy in masquerade finery. It is fitting–see foyer above.

As the show starts, the theatre fills with a mist tinted red by the stage lights. And then you’re in another world.

Nutcracker Rouge, Theatre XIV’s Christmas-themed burlesque show, is unlike anything I’ve ever experienced. There was a sense of tasteful decadence: more dancing, more singing, more ensemble, more sex appeal. It wasn’t just that there was so much ballet in this burlesque show; it was that they did ballet in heels.

And they crushed. The musical numbers resounded. The acrobatics drew gasps. The dance was elegant, beautiful, and coordinated. Most of the performers combined talents–dancing or singing while swinging from the ceiling, or performing strange feats between dance numbers. And it was all in heels. Anything you have seen done elsewhere, they can do in heels.

Throughout, the show flows cleanly between coordinated ensemble acts to individual performances, all guided by the sugarplum fairy (Christine Flores), the show’s throughline and silent guide. Armed with a sense of childlike wonder and glee, Sugarplum explores each act with the audience. Sometimes she joins in, while other times she just watches and reacts.

If you are interested in taking a little opulence, a little decadence, a little sex, and a lot of glamour, into the new year, Nutcracker Rouge is a can’t-miss. Grab a ticket now: the holiday ends after this weekend.

And then check out their next show, Seven Sins, beginning Valentine’s Day.

Revisiting the Past At The McKittrick World’s Fair