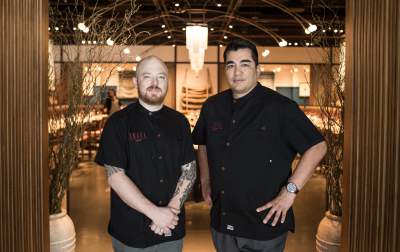 Once upon a time — about ten years ago, to be exact — the only local, pre-movie dining options you had were either Chevy’s or P.J. Clarke’s.

Now, directly across the street from the Regal Battery Park City theater — and a new Mexican restaurant called El Vez, Blue Smoke Barbecue, and Shake Shack — is Amada, a Spanish restaurant named for owner’s grandmother, who
ignited his love of food at a young age.

In collaboration with Chef de Cuisine Justin Bogle, previously of the Michelin-starred Gilt, Garces offers a menu of traditional and modern tapas that features classic Amada staples, as well as unique signature offerings, available only in New York City.

“It is truly humbling to return to the city where I started my career as a young chef all these years later,” says Garces.

Amada’s menu includes a variety of favorites from the Philly-based original, such as Amada’s Empanada made with a melty Spanish Manchego and artichoke escabeche, an homage to the meal he prepared with his grandmother for family gatherings years ago.

“I can remember when I first worked for Jose back in the early 2000’s, I was at the restaurant the day he brought his grandmother in to teach the prep team how to make the dough and form the empanadas,” said Chef Bogle, who lives a ferry-ride away across the river in Jersey City. “Amada’s approach to Spanish Tapas is pretty traditional, with some modern touches. It is a fairly-large menu, which we feel allows us to offer something for everyone.”

Also making the trip to Battery Park is the Tortilla Española (Spanish tortilla served with a saffron aioli) and Wagyu Brochettes a La Planxa (griddled Wagyu beef skewers), as prepared at a plancha grill in the rear of the dining room.

Large dishes, or Especialidades De La Casa, include, most impressively, a $78 Lobster Paella topped with a fava bean salad and smoked paprika aioli. Right now, those are moving at a rate of about 15 orders per night.

Chef Bogle’s personal favorite is the Cordero Picado, a dish of Border Spring’s Farm Lamb Tartare with Romesco Verde and Puffed Idiazabal. This was one of the first dishes he developed for the New York outpost, which gained immediate Jose’s approval.

“We take a classic romesco and substitute green ingredients. Instead of ripe tomatoes we use green tomatoes, green peppers in place of red peppers and pistachios are added in place of almonds,” he said. “The dish is garnished with a puffed Idaiazabal cheese cracker, similar in texture to a Vietnamese prawn cracker, except made with Idiazabal cheese.”

Adjacent to the restaurant is Amadita, a bright and airy 20-seat café offering coffee and a light breakfast or lunch. The café features a menu of Spanish-style coffees, like Café con Leche and Cortadito, and savory breakfast options such as a Ham and Manchego Pastry and Pan con Chocolate. Lunch offerings including Bocadillos, Spanish-style sandwiches, such as Jamon Y Chile Verde with Serrano ham, Idiazábal cheese and green chile escabeche, and two types of Empanada Gallega filled with chorizo picadillo or spinach, manchego and egg.