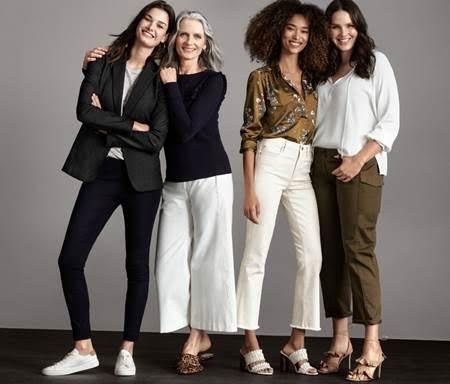 National Women’s History Month is starting on the first day of March and Ann Taylor is launching a new campaign to celebrate the brand. The company has committed over 60 years to make a woman feel powerful in her wardrobe every day. The campaign will feature a video journey from 1940, when women could still be arrested for wearing pants in public, in 2018 where women can wear them whenever wherever. Not only the video will show the evolution of women wearing pants but a symbol of equality for women.

At Downtown, pants are a way to be able to feel comfortable, confident and powerful an outfit.  Whether it’s a fancy pantsuit to the ripped jeans that weren’t originally ripped. Let’s take us on a journey to memory lane on the different kinds the pants to dedicate Women’s History Month.

The pants suit was the way and breaking down the stereotype of having women only wear skirt and dresses to work. Working women who wanted to be taken seriously and be suitable at work was the fashion statement in the 40s. Dresses were still fashionable, but women were breaking the stereotype.

The jeans came into play and started the trend of having women be relaxed but still have stylish outfits. Plus, the patterned pants and flair pants were a powerful statement.

Color, color, and color. Bright fun color is what the 60s brought to women across the country, and the pants were all the talk. Fun colorful pants pink, yellow and red were a new way for women to express themselves. Plus, corduroy colorful was a trend that continues today!

Bell bottom pants were the pants to wear and bigger the bell bottom the power move for women! The 70s continued to have vibrant colors and funky pattern.

Acid washed jeans, and straight leg jeans took over the 80s with a bold statement in their outfits. The 80s brought the movement into power dressing in the workplace. Plus, wearing a bright color to show the movement feminism in the work field.

Ripped jeans were the popular trend in the 90s and bringing the gauge style to America. A casual chic look to women and reminding them to express themselves. Not only the alternative look but the glamour fashion was a flashing trend too. Women fashion animal print and pantsuits continued from the 80s to the 90s.

Camo pants, low-rise jeans, and Juicy Couture tracksuits were the rage in the 2000s. Fast fashion became a trend where people can buy trends from high-end fashion but get the items at a lower cost. Forever 21 and H&M were places where women get the latest fashion.

2010 brought the hipster into coffee shops and man buns. Women wore their and boyfriend jeans. These pants made for a relaxed but stylish look, women rocked during this decade.

It’s still early to predict or even show the pants trend, but the fashion has evolved into women being able to wear beautiful and powerful pants. For 2018, track pants with heels are an active classy look for 2018. Racing fashion is an upcoming trend that Downtown has been noticing, and we think women develop a new way to push ladies out of their comfort zone with this trend.

Pants have not always acceptable to wear but now women are kicking butt and making pants the power move! Women’s History is those who wish to celebrate what they want to wear and break down the stereotype. Women can make their own power by “wearing the pants,” Ann Taylor’s Spring pant collection features new styles and showcases the brand’s extended sizes and hems.