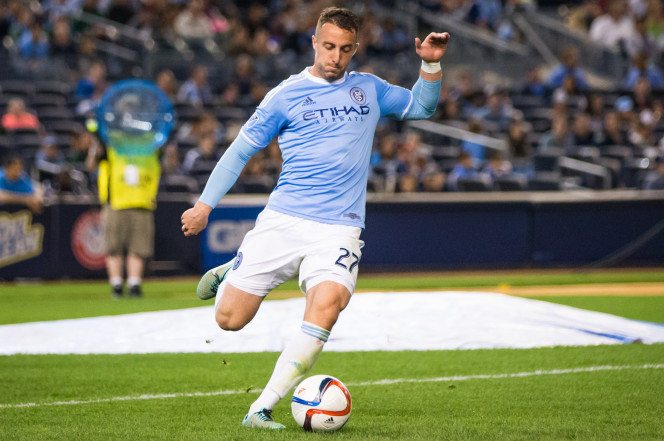 New York City FC has become one of the most popular clubs to support in all of sports in New York. The teams play their home matches at Yankee Stadium and averages 27,196 fans per game. Though the team has top-tier stars in David Villa, Andrea Pirlo and Frank Lampard, one of their key players is RJ Allen, a native of Old Bridge, New Jersey and NYCFC’s starting Right Back.

RJ Allen plays a huge role in the attack for the Boys In Blue, running ferociously up the right flank. He has also made some unbelievable assists this season. NYCFC faces a huge hurdle this Sunday as they face Toronto FC in the second leg of its playoff matchup. NYCFC lost 2-0 in the first leg, but the score was 0-0 until the 83rd minute of the match. To advance, NYCFC must win by two or more goals depending if Toronto scores any such road goals at Yankee Stadium. It will be electric at Yankee Stadium and tickets are still available through Ticketmaster.

After a difficult inaugural campaign for NYCFC, it seems that Patrick Viera really created an identity for the club here in year two. How is it playing for Patrick Viera and what influences have been given by the top three Designated players in Frank Lampard, David Villa and Andrea Pirlo?

RJ Allen: Yes, year one definitely didn’t go as we planned, but Patrick stepped in and really took control of our locker room. He put a system in place from day one and we all believed in it and took that challenge on. It is a joy to come to work everyday and play under him. It’s been a great experience so far.

As far as Frank, David, and Andrea, they are some of the hardest-working players you will ever come across. It is a real honor to be in the same locker room as these guys and I just try to learn from them as much as I can while they are around. They are true professionals.

Finishing second place in the Eastern Conference was a huge success but what must the team do to recover from going down 2-0 versus Toronto in the first leg?

RJA: We will make some changes tactically. We are going to go for it, though. We will have to manage the game really well and pick and choose our moments when to commit so many numbers forward over the course of 90 minutes. With the talent we have in our locker room and quality in the final third of the field, it is definitely a doable task and we all believe in it.

NYCFC Supporters have been truly sensational since day one. The fans are always very supportive of the club, the Third Rail and the various fan clubs are very passionate and loud for their team as well. How important is Home field advantage come Sunday versus Toronto?

RJA: Home field is massively important especially going into the second leg two nil down. Our fans are a big part of why we are where we are today. Our fans have been amazing all year and I’m sure they will come out rocking the stadium on Sunday and be very loud.

You are a local lad from Old Bridge, New Jersey, it must be such an incredible feeling playing in front of your family and friends week in and week out during the MLS campaign?

RJA: It’s a very special feeling to be able to see your family and friends after a match or meet for dinner after a game on the weekend. It is something I don’t take for granted and it is a privilege. It’s a dream to have the opportunity to play in front of them week in and week out.

Being raised in the New York/New Jersey area, Where are some Downtown Manhattan spots that are of interest to you and your teammates.

RJA: There is a number of different quality restaurants in New York I like to eat at. One place that my teammates and I eat at often is Tao Downtown. Another one which Valentina and I recently went to was Catch in the Meatpacking District.