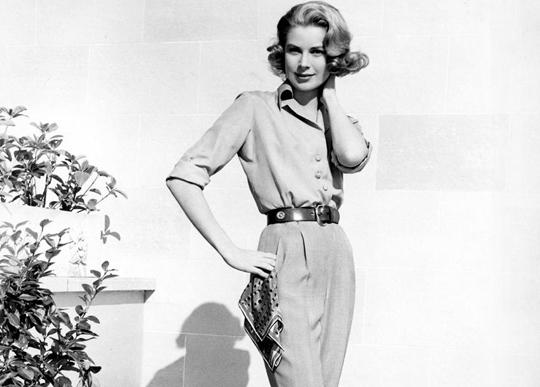 The 20th century witnessed the invention of machine guns, tanks, and grenades. But perhaps the most explosive products to come out of the past ten decades are the iconic women who defined the era.

We have chosen ten women to represent each decade, from the 1920’s onwards. Inevitably, it was a daunting task, but we’ve taken a pretty good crack at it if we do say so ourselves. Armed with revolutionary veils of power and triggered by the ratification of the 19th amendment, these women unified style and substance. Comment below if you think of anyone more suitable — we love hearing your opinions!

The siren of the silver screen once said, “I’m afraid of nothing except being bored.” Perhaps the simple fact that Greta Garbo herself was anything but boring prevented her from being involved with anything that did not excite. The graceful silent film star led a private life away from the paparazzi, thus only furthering her alluring intrigue. Garbo’s style was classically elegant. She perfectly embodied the glamour of Old Hollywood, making her our top choice for style icon of the silent film age.

Vivien Leigh stole our hearts as the selfish yet charmingly endearing Scarlett O’Hara in Gone With the Wind. Much like the character that made her so famous, Leigh was passionate and determined. She fell in love with Sir Laurence Olivier and the two were eventually married. But even with her new-found title, Leigh always remained true to herself and her gorgeous, yet unpretentious style.

“Be yourself. The world worships the original,” Ingrid Bergman once wisely advised her fans. And original she was. Instead of conforming to Hollywood’s standard views of femininity, Bergman broke the norm by dressing exactly how she wanted. Her classically androgynous style paved the way for modern women to come.

For a distinct decade filled with revolutionary style, we couldn’t limit ourselves to just one icon. Without a doubt, Audrey Hepburn and Grace Kelly are two of the most memorable fashion icons of all time.

Hepburn’s performance as wild party girl Holly Golightly in Breakfast at Tiffany’s both shocked and mesmerized the world, (as well as popularized the little black dress). Generations of women have modeled their style after Hepburn. In fact, famed shoe designer Manolo Blahnik once named Hepburn “the most important look for the 20th century.”

Grace Kelly’s impeccable poise and radiating beauty allowed her to transform into almost any role; She pulled off the wholesome and pure look while simultaneously seeming mysteriously seductive. Her eventual marriage to the Prince of Monaco and ascension to Princess status only further solidified her unattainable and sophisticated charm. We love you, Grace.

Decade known for: The Beach Boys, PVC everything, and video games

Legendary sixties ‘It Girl’ Edie Sedgwick charmed almost everyone she met from Andy Warhol to Bob Dylan. The beautiful but troubled model, muse, actress, and socialite embodied the sexual revolution of the 1960’s and garnered attention everywhere she went. Warhol once spoke of his relationship with Sedgwick saying, “One person in the sixties fascinated me more than anybody I had ever met. And the fascination I experienced was probably very close to a certain kind of love.”

“For me, clothes are kind of character,” Meryl Streep once said. We all know her as the Prada-wearing devil, but off screen Streep could not be further from her character. She says, “I don’t follow fashion or understand trends.” Despite this, Streep has become a major fashion influence for a number of decades. Simply put, her resistance sets her apart as a trendsetter. The flawless star with the impossibly high cheekbones has remained a style icon well into her older age and will continue to inspire women for generations to come.

“You want to know what comes between me and my Calvins?” 15-year-old Brooke Shields seductively asked America in the 1980 Calvin Klein Jeans ad. “Nothing,” She responded with a smirk. Although Shields was no stranger to risqué roles, (she had previously played a child prostitute in Pretty Baby), the alluring ad was enough to propel her into superstardom. Those show-stopping eyebrows and that gorgeous mane marked the true standard of beauty in the 1980’s.

Decade known for: Boy bands, crop tops, and the Internet

We’re throwing you a curveball—or kicking, as the case may be—with our 90’s belle. We love our fashionistas here at DOWNTOWN, but as our next icon shows us, style isn’t just about the glitz and glam. Mia Hamm wowed the world on the soccer field in the 90s, rapidly becoming one of the most influential female figures in sport. Bagging the sportswoman of the year two times wasn’t enough for the Alabama born superstar, the pinnacle of her accolades came later where she was listed as one of FIFA’s 125 best living players, one of only two women on the list! Good for you, girl!

The 2000’s saw a breakaway from household supermodels towards faceless, nameless teenage models. Kate Moss is the exception to that standard. The beautiful and utterly cool model was the name on every fashion file’s lips in the early 2000’s. Kate dresses and does whatever she wants; Her edgy and unapologetic demeanor is exactly why we love her.

So there you have it, the countdown to the era of One Direction, iPhones and leggings is over. But we’re only mid-way through this decade, which means there’s plenty more time for you to spark that light bulb above your head and start inspiring the nation.