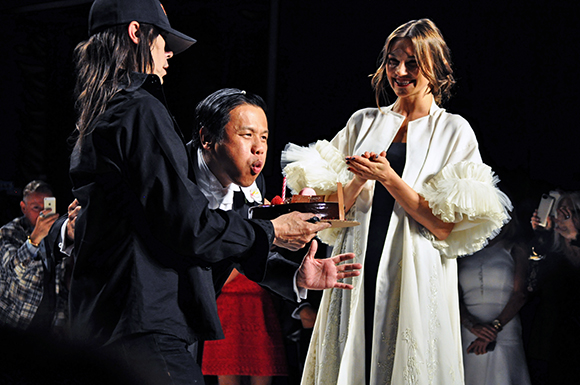 Zang Toi is surprised with a cake for his 25th year in fashion. Credit: Paulina Prejbisz

Malaysian designer, Zang Toi, celebrated the fulfillment of his American Dream—to be a famed fashion designer—on the runway of his 25th anniversary show yesterday at the Mercedes-Benz New York Fashion Week event.

The Spring/Summer 2015 collection was set to tunes of patriotic sentiment—“American Woman” and “America, The Beautiful.” White and red striped blazers, tailored women’s suits in green and red, and orchid printed dresses glided down the runway exuding classic American glamour and elegance.

In terms of the beauty trends, the makeup was minimal and classic American clean. The hair was long, wavy, and chic for the first part of the show. The waves were pinned delicately at the nape for the second half of the show, with ornate orchid headpieces pinned in behind the ear.

The collection also flaunted classic black dresses draped with white pearls. One stand out black number featured a white T-shaped collar of pearls, resembling a delicate piece of armor capping the shoulders up to the neck.

At the end of the show, Zang Toi was received with a standing ovation and applause in recognition of his 25 years in fashion. The icing on top of the cake was, in fact, an actual cake presented to Mr. Toi. A production crew member and model surprised the designer with a cake in honor of his triumph. The entire show sang “Happy 25th Anniversary to You” before Zang Toi blew out his candle.

What did he wish for? We hope another 25 fabulous years in fashion.

Check out the photographs from our front-row view at the show as well as our backstage interview with Zang Toi below!