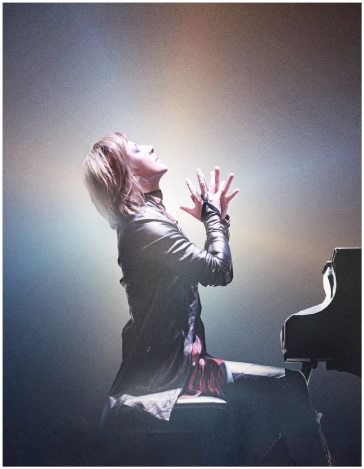 Yoshiki Hayashi — better known around the world under the single name Yoshiki — has been a superstar in his native Japan for decades. As the co-founder of the hard rock band X Japan, he has reportedly sold over 30 million albums. He has sold millions more albums as a solo artist and producer, also having crossed over into the classical world as a composer. The journey of Yoshiki and his bandmates was recently chronicled in the documentary We Are X, as shown at Sundance and the 2016 SXSW Film Festival; the producers behind the film also helmed the award-winning Searching For Sugar Man.

On Jan. 12 and 13, Yoshiki will be performing two shows alongside the Tokyo Philharmonic Orchestra at Carnegie Hall’s Stern Auditorium/Perelman Stage. In advance of these Carnegie Hall performances, Yoshiki caught up with Downtown for some Q&A. More on the Los Angeles-based Yoshiki can be found at www.yoshiki.net, while the legendary drummer and pianist can be followed on Twitter via @YoshikiOfficial. X Japan tour dates — which will likely include a return to New York in the near-future — are posted at www.xjapan.com.

You will be performing two shows at Carnegie Hall this week. Have you ever attended a performance there before?

Yoshiki: No I haven’t. This will be my first time, as I have never been even though when I lived in New York I actually lived next to Carnegie Hall.

What do you remember about the first concert you ever played in New York?

Y: The first concert I played was at was at a place called Roseland Ballroom. And then about three years ago, I played at Madison Square Garden. The shows at the Roseland and Madison Square Garden were some of the best shows we ever played. All the shows we play in New York are historical. Hopefully the shows at Carnegie Hall will be some of the best shows as well.

Y: Well, I live in Los Angeles, but when I travel to New York, Nobu is one of my favorites.

I had the pleasure of attending the SiriusXM launch party of Yoshiki Radio a few years back. Was doing a radio show an enjoyable experience for you?

Y: That was a lot of fun! When we have our new album come out, I will do something like that again.

After this Carnegie Hall show has wrapped, what is ahead for you?

Y: It will be London! X Japan will be playing at Wembley Arena.

Might we see another U.S. tour from X-Japan in the near-future?

Y: We have a new album coming out so I think yes.

Have you ever encountered any members of the U.S. band X in your travels?

J: Actually, I ran into the vocalist Exene a few years ago and we talked about touring together — X and X Japan. I love X but I didn’t know about X until I came to America.

When not busy being a global superstar, how do you like to spend your free time?

Y: I don’t think I am a superstar, just a musician. I don’t really have free time, but when I think about it I’ve been playing piano.

Is there something you wish more people knew about you?

Y: I want people to know me for my music. X Japan hasn’t really released an album in over 20 years.

Y: Probably something that was loud metal. Metallica!