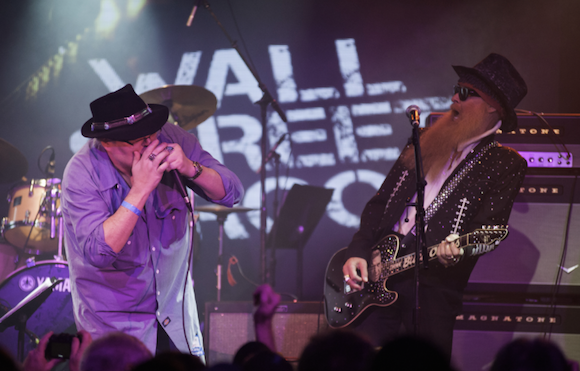 Over 600 supporters turned out for Wall Street Rocks’ Benefit Concert at Highline Ballroom on Monday, November 10th.   This end of year show on the eve of Veteran’s Day benefited ReserveAid, which provides financial support to Reservists and National Guard members who are currently deployed or who have recently returned from deployment.

SiriusXM Host Eddie Trunk emceed the evening, which featured a concert from an all-star band of musicians including John Popper of Blues Traveler, Billy Gibbons of ZZ Top, and Warren Haynes of the Allman Brothers, Will Lee and Anton Fig from The Late Show with David Letterman, and Martin Guigui.

Wall Street Rocks co-founders George Chrisafis and Leslie Kirby hosted a VIP reception to kick off the evening with speeches from John Withrow from ReserveAid, Vince McGowan from United War Veterans Council, Stephen Daffron, Chief Executive Officer of Interactive Data Corporation at Morgan Stanley, Daniel Vargas from Operation Finally Home along with Author & Veteran Mike Scotti.  Each spoke of the importance of giving back to our nation’s veterans.

Wall Street Rocks is a collaboration of employees in the financial, technology and entertainment industries, who are passionate about giving support to heroic Americans who serve our nation, including military veterans and first responders.