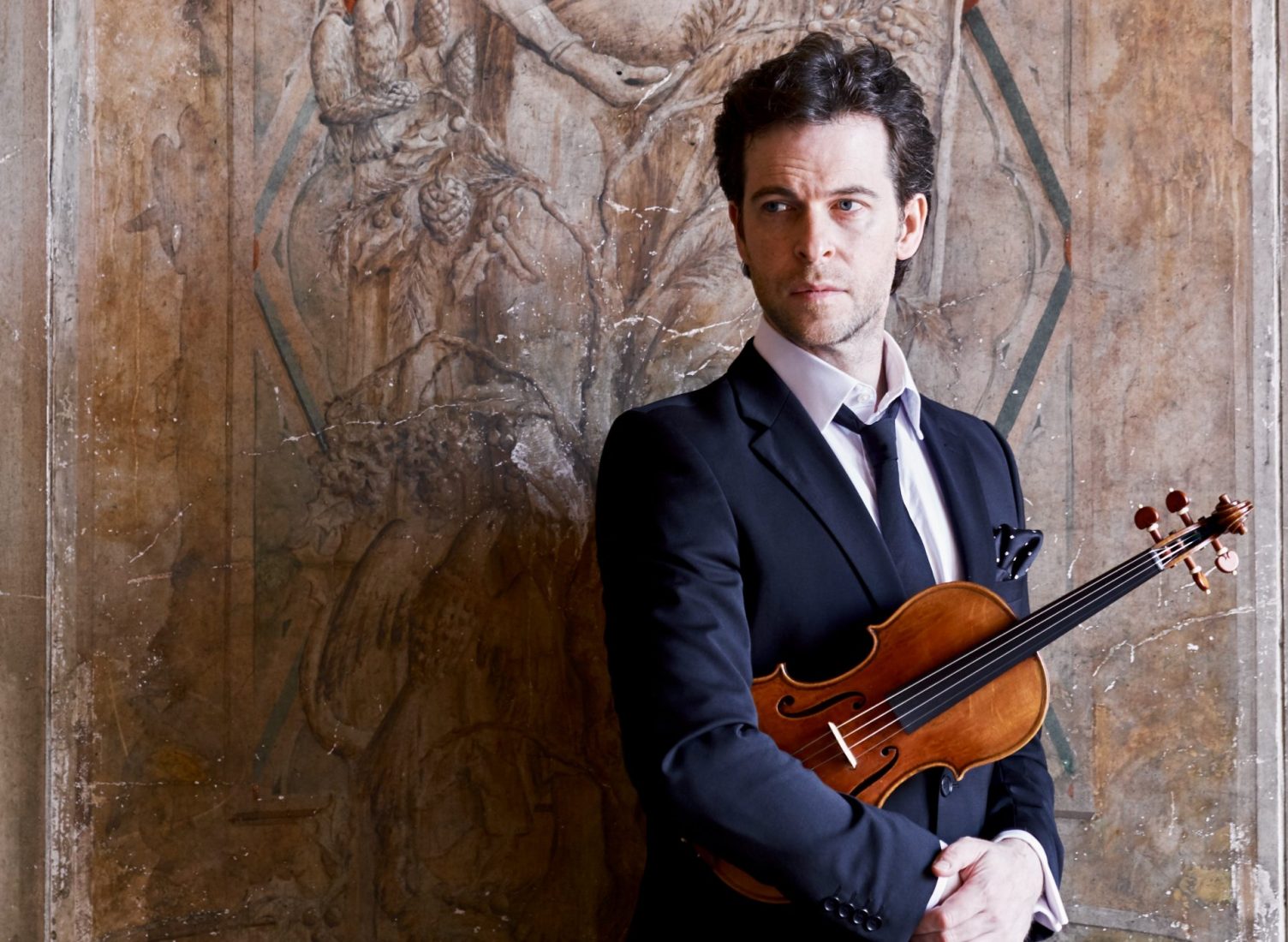 Gregory Harrington is a world renowned violinist and a top musician in Downtown’s heart. We chatted with him about his history, his love of travel, and his new album of standards due out this coming June. Keep reading until the end for an exclusive sneak peek at one of the tracks!

Downtown: Was there a moment when you realized that you wanted to play violin professionally? What was that like?

Greg Harrington: The moment I knew it was going to be my career I think I was about twelve. I started playing when I was four. I was in the audience for a show with my mother and I heard this string quartet playing and I just was so drawn to the sound, so she got me a violin that next week. We worked with this teacher that I had for around fourteen years. One of the pinnacles of violin playing is the Beethoven Violin Concerto and I told my dad that I wanted to play it. At the time you had to order music from music store, and he actually got it in London. He brought it back to me, and I started playing it and I brought it into my teacher and I said this is what I want to do. He had this wry smile on his face and he said, “Okay, would you like to play this for the rest of your life in a living room or would you like to play it in a concert hall with lots of people?” I gave him an honest answer, I said, “Well look, I presume if I can play it in a concert hall with lots of people I can play it in my living room.” I think that was sort of the moment that he said we’re going to change the direction we’re going. At times it was difficult when I was younger to get that motivation to practice but I’ve always loved it.

Downtown: How did you end up studying international commerce and Spanish literature in college?

GH: I had done so much music in Dublin, I think I did it just for the nature of having a fallback. My dad at the time was just more for get a real job and mom loved the whole artistic life so it was that sort of dichotomy of two parents. I think when it came to going into college I didn’t want to do music, I didn’t want to do law, I didn’t want to do engineering, I think I had international business and spanish down as my first choices in Dublin at University College Dublin. It actually was a really, really good idea because for a lot of what I’ve done has been self managed, self promoted. Now I’m getting to the stage where I’m getting more interest in artist management companies. Short story is it was a basically because I didn’t want to go away and do music, I wanted to do just a different degree and it turned out to be a really good choice.

Downtown: How did you end up in New York?

GH: I actually came over here to study with a teacher. After a short while, I ended up with another teacher up in New Haven who was a virtuoso and just incredible. He just made it absolutely black and white for me. I would go up once a month for a private lesson. I loved the train ride. I’m easily amused when I’m looking out a window. I love travel, I love the freedom that you can get. For me visual really causes a catalyst to think differently.

Downtown: What are some places you would love to visit?

GH: There’s a lot of great symphony halls that I’d still love to perform in. There’s certain personal things I’d like to do like play in the UN. It’s a long list so it’s hard to narrow that one down. There’s a lot of the most incredible concert halls and venues in the world that I still haven’t played, for example Blue Note or Berlin, there’s just a lot of beautiful concert halls. I think the other side of that, there’s just nothing like getting up on stage no matter what that stage is to play music. I think rather than looking at from defining where I want to play, if I can look back at the end of this and say that was some journey and I am so happy that that’s what I did that’s really the goal.

Downtown: What led you to start your own music label? What’s it like running a label?

GH: The label is wonderful because I have creative control over every aspect of an album. When I came to do my second disc the for a very classical market, the deals you get are just horrendous and you can be tied in until you earn the company back a certain amount. There was just nothing in it that was enticing; there was no creative control over visual branding, over content ,really over anything so you basically provided the master. I was never convinced that any of the labels had a really good plan for me.On my own, I had the opportunity to run the marketing or plan the publicity, try and target where the niches were and find out how I could sort of draw it towards those niches. I think it’s the creative control that I like. It’s part of the brand, so as this is growing, which is great, Greg Harrington is what you see visually, it’s what you hear, it’s what you see online, it’s what you see on Instagram, and again, it’s not a finished product but it’s developing into something that is much more consistent.

Downtown: Why is childhood music education so important to you? How are you involved with it?

GH: For a long time I was teaching at two private schools. I still do private students now, and there’s one school on the Upper East Side that I conduct the orchestra, so I arrange and conduct everything there and that’s a process that I still really love.It never matters what standard a student is, it’s about their willingness to learn and their willingness to absorb that musical language. Once you see a kid trying it’s really cool because then you can try things and you can get them to a level where they haven’t been and that’s the goal any time they walk in the door can they walk out a little better than where they’ve been. I want them to enjoy music to a level where it’s more human and it’s more relatable, irrespective of if you’re going to play Beethoven or Bach. It just depends on what they like, so if you want to mix that up with The Greatest Showman or music from Coco and stuff like that, it’s about giving that little hook where they really enjoy it and they really are able to figure out how to express themselves and what they’re trying to say.

Downtown: How did you decide what to put on your latest album?

GH: My latest album is standards that range from “Hallelujah” to “When I Fall in Love” to “Summertime.” I wanted to brand into a more mainstream market because I’ve been doing this for about five or six years and the reactions on stage have been phenomenal. I wanted to take materials that I had been doing for a while and some that I hadn’t done at all. It’s sort of a different sound with drums, bass, and piano as opposed to the more classical oriented stuff that I’ve been doing. The direction with this will be jazz clubs and more mainstream venues. I’ve always been inspired by and loved Miles Davis and Charlie Parker and John Coltrane so that was a big inspiration in this as well.

Downtown: What’s different about this new album than your previous ones?

GH: The first one was the edge of classical, a lot of classical encores and a little bit more edgy stuff like John Williams. The second album was purely classical contemporary so more modern composers, very niche. The reviews were incredible so I was delighted with that. The last one that I did before this was unaccompanied Bach which was just solo violin. Standards seemed to be the direction to go next.I recorded two albums last year, this is the first one and then I recorded Philip Glass’s work for violin and orchestra with the Janáček Philharmonic in Ostrava in the Czech Republic. That will be coming out at the end of this year or the beginning of 2020.

GH: Yes, of course. I think that is an endless list. People like Tony Bennett or Chris Botti or the incredible Wynton Marsalis, people like that who are legends in their own field. In the classical realm, I’d love to play with one of the great orchestras and one of the great conductors, one of the big five orchestras. It’s just a huge list because I love the idea of having music to connect to others and making music with great artists is something that always drives you.

GH: Once I release this I want to build the momentum of it and grow the brand more and try to put the music in television and get more exposure. One of the things I’d really love to do is create a travel program where I go down to Chile, take a motorcycle, and a team and try the food, play with local musicians, sample the wine, visit the countryside, and then finish up in a concert in Santiago. The mediums have changed so much and you can figure out ways where you can define your niche and be the only one doing this thing and pitch that to different outlets.

Here’s an exclusive track from Gregory’s upcoming album “Without You”! Listen to Autumn Leaves from the Album by Joseph Kosma now.