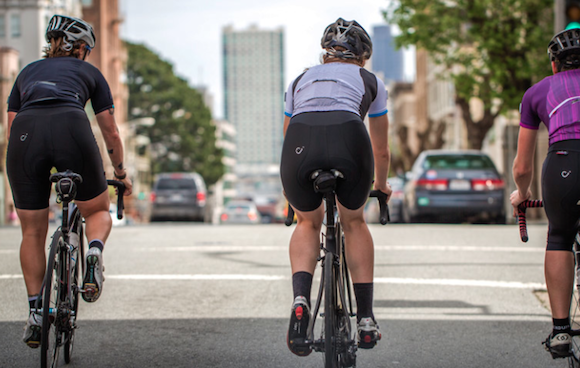 After testing the Velocio Stripes Jersey and finding it to be the best-priced, high-end jersey on the market, DOWNTOWN had to test out a pair of their cycling shorts. With a wide-range of products including uniquely designed Spin Shorts, Knickers, and Tights, we tested out the Signature Bib Shorts.

Similarly to Velocio’s Stripes Jersey, we were excited about the bibs upon picking them up and feeling the material. Made from premium quality Italian Lycra, the bibs felt different from other shorts. We could see that there were no visible seam lines to potentially irritate our skin, and all stitching was soft and well tailored. The chamois was light yet dense with promise, and we wondered how a bib short could possibly be so light. As soon as we tried on Velocio’s Signature Bibs, we fell in love.

We found Velocio’s obsession over the small details to be a delight. Easy to slip on, the stretch mesh front panel and supple straps felt non-restrictive and almost non-existent. Rather than digging into our shoulders, we felt that the straps sat perfectly on top while still being supportive. Seam lines kept stitching away from high-friction areas thanks to strategically placed, anatomically cut panels, and the material was light without being see-through. Also present were the strategically placed, reflective logos for increased visibility.

Perhaps our favorite attention to detail was the Velocio Leg Band that gripped the base our legs without creating the sausage effect—a common occurrence in women’s shorts where the elastic grip on shorts is too small or tight to properly conform to the size of women’s legs. The result is a thigh that looks like a sausage casing. Grippy but (for)giving, we were delighted by Velocio’s cognizance of the anatomy of the female rider.

Of course, the most important aspect of any cycling short is always the chamois. As previously mentioned, Velocio’s chamois is noticeably padded, and well sewn into the shorts. Even after several hours in saddle, we found the chamois and cushioning to be as comfortable as in the beginning. No shifting, no friction spots, and no pressure points. Velocio’s top-of-the-line custom Cytech chamois absolutely delivers.

The only perceived point of contention could be the price. At $199 dollars for the Signature Bibs, Velocio still comes in way under Assos and Rapha’s prices and is on par with the price-range of lesser-quality, equally-priced competitor, Pearl Izumi.

If you’re looking for the best-priced, best-quality pair of women’s bib shorts on the market, Velocio’s Signature Bibs are for you.