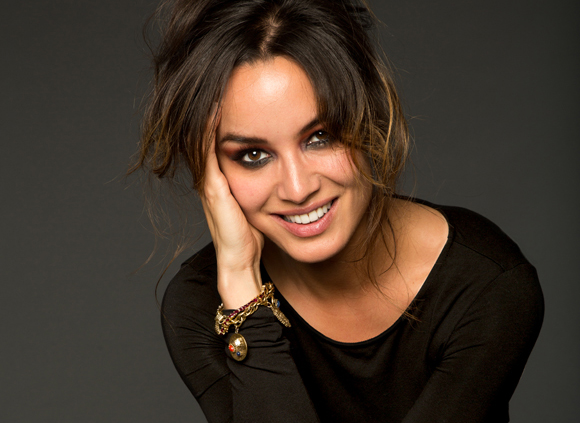 This is the second of several spotlight pieces by DOWNTOWN photographer and correspondent Leslie Hassler about some of the finer films, filmmakers and talent in this year’s Tribeca Film Festival.

5 to 7 is the kind of romantic comedy that Hollywood has all but forgotten how to make: witty yet wise, both sophisticated and instantly accessible, and above all, true to what it means to fall in love, grow up and be human. Writer and Director Vic Levin has written for some of the top television series of all time including Mad Men, Mad About You and The Larry Sanders Show. The film stars Anton Yelchin (Star Trek) and Bérénice Marlohe (Skyfall) as the central couple who begin a cinq-a-sept affair. Though she’s older, married and the mother of two, Brian can’t help but be drawn to her. It’s a clash with his traditional values and his parents (Frank Langella and Glenn Close) can barely handle it. Also in the cast are Olivia Thirlby (Juno), Lambert Wilson (Suite Française) and Eric Stoltz.

The cast and crew had the pleasure of shooting 5 to 7 on the streets of New York City. “I never filmed in New York before,” admits Bérénice Marlohe. “It was very new to me, this city, so it really helped me believe that I am this character, that I am part of this ultra-vivid and organic and great city… you’re fed by the energy of it and so it was absolutely great to have the city as another character in the movie.”

Both Glenn Close and Olivia Thirlby share a sentimental connection to New York: “My very first film, The World According to Garp, was shot in New York,” recalls Close, “so I’m very, very partial to shooting here.”

For producer Julie Lynn, the opportunity to use New York institutions like the Public Library gave the film a special kind of magic. “When you add the Guggenheim and Central Park and a lot of the other places like Fifth Avenue, Madison Avenue… you really get a sense of we’re making a movie in New York. We’re not just inside a room that could be anywhere where we’re passing off another city as New York. We’re in New York, for real. It’s great.”

Two particular institutions represented a collective coup for the team. “One was the ability to film in the St. Regis Hotel,” explains Curtis. “And the second was to somehow convince The New Yorker magazine to allow us to use their masthead and their art work and their magazine, to get clearance to do that throughout the whole film. And if, perchance, their editor, David Remnick, wanted to actually be in the film and play himself then that would be okay, too,” she deadpans.

“For a long time,” Curtis continues, “we didn’t know if it was going to happen or not, but after much relentless pursuit on all fronts, we ended up in a meeting in David Remnick’s office several weeks before filming. And David, who is just the loveliest man, said, ‘okay, just don’t make me look like a fool.’… He doesn’t.”

Seeing the film, meeting and photographing the cast and the director, I came away with a warm feeling that something beautiful had been captured, a true love story – with humor, sadness, fear, pain and all of the emotions one hopes to experience in life. Frank Langella especially stood out and the scenes with Glenn Close, Langella, Anton and Bérénice are priceless!