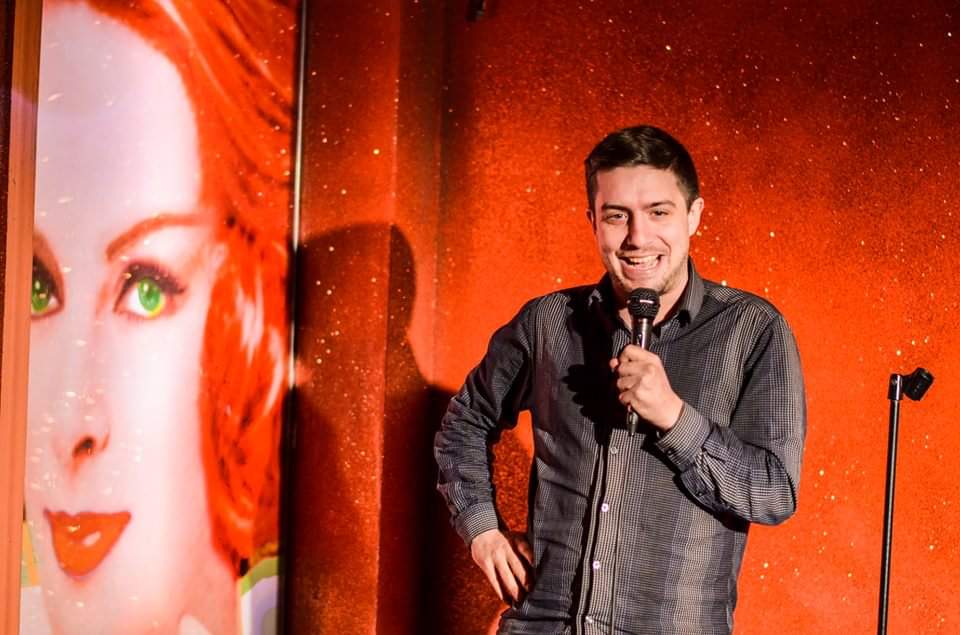 If anyone could be considered an online dating expert, it might be NYC Comedian David Piccolomini. His podcast, Tinder Tales, explores the often-bizarre world of online dating and has released more than 180 episodes over the last three and a half years. Each week, Piccolomini and a guest swap stories and examine dating habits, leading to strange revelations and good laughs.

He also understands why online dating can be so confusing. Many of his listeners found his podcast while googling for Tinder advice. “People get on tinder and they’re freaked out,” he says, “There are so many options and so many people. Either nobody’s swiping on them, or too many people are swiping on them. It’s a lot. And then they’re like, ‘Well, there’s gotta be a podcast about this.’ And there is!”

Online dating might seem like a recent phenomenon, but Piccolomini has been at it for more than 15 years. As a young teen in Wilmington, DE, he spent a lot of time in AOL chatrooms talking to women he’d never meet. “It was kind of like I was prepping myself for the world of dating at large, or for this world that we’re in now, and I didn’t even know it. I was just like, ‘Oh, hey, this is the one way I connect.’”

A decade later, he moved to Philadelphia to pursue stand-up comedy and picked up online dating again, this time actually landing dates. It became a hobby–one which he continued when he moved to NYC.

It didn’t take long for Piccolomini to realize that he had something that others wanted. “I saw friends’ profiles and was like, ‘Oh, you look like a serial killer. That’s why no one’s matching with you.” He started to give advice, helping his friends find dates and partners. The more advice he gave, the more stories he heard. The podcast seemed like a logical next step.

The first episodes of Tinder Tales were recorded in the living room of his Brooklyn apartment. His first guests were other comedians who, he says, often make the best guests because they’re natural storytellers and not afraid of being honest. It’s a big part of what he values in a good episode of Tinder Tales: great stories, vulnerability, and humor.

“Part of what I like about doing tinder tales is the number of people I’ve talked to where they’re like, ‘Oh, I thought I was the only one who had this story,” or they listen to one of the episodes and are like, ‘I thought my story was crazy!” Some comedians will listen to each others’ episodes before they go out on a first date, just so that they’ll be prepared.

The stigma of online dating isn’t as bad as it was when Piccolomini started his podcast, but there are still a lot of misconceptions about it. “People look down on it sometimes, but I think it makes dating a more interesting experience. When I meet people through online dating, I know at the start that we have things in common. I don’t have to guess.”

Learning to find those people with similar interests is a common subject on Tinder Tales. The advice: find a way to work it into your profile. Piccolomini, a self-described “board game dork,” finds other fans with a dating profile which, among other things, asks a potential date to “settle the catan of my heart.”

After three and a half years of Tinder Tales, Piccolomini has become more thoughtful about dating. One of his biggest takeaways, he says, is that–for the most part–nobody does dating “wrong.” It’s just a matter of preference. What is ghosting? When should things get sexual? It changes from person to person. “What I’ve learned,” he says, “is that the more you communicate, the better your overall experience will be.” Whatever your expectations are, make sure you let the other person know.

That being said, he does have some general dating advice, no matter who you are or what you’re looking for in a date.

1. Ask Questions, preferably something personal–anything that makes it easier for them to respond. Stand out by actually saying something of interest, and whatever you do, don’t open the conversation with ‘Hey.”

2. Have Opinions, even if you disagree on those opinions. Chances are that any big differences were going to come up on date three anyways.

3. Listen. If you’re not listening, you’re not responding or engaging. That sounds like a very boring date for the other person.

For more advice, and for some of the wildest true dating stories you’ll ever hear, you’ll have to listen to his podcast, Tinder Tales, available on iTunes, Stitcher, Spotify, tindertalespod.com, as well as most other podcasting apps.

If you’re looking for a good place to start listening, try one of these episodes:

Stan Talouis: “This Is Who You Are”

Hannah Harkness: “I Went Viral on Fetlife” or “Life Hack: Fuck ‘em Both”

Neel Nanda: “Everybody Gotta Get Touched”