The Who & The What Hits Home and Brings Laughs 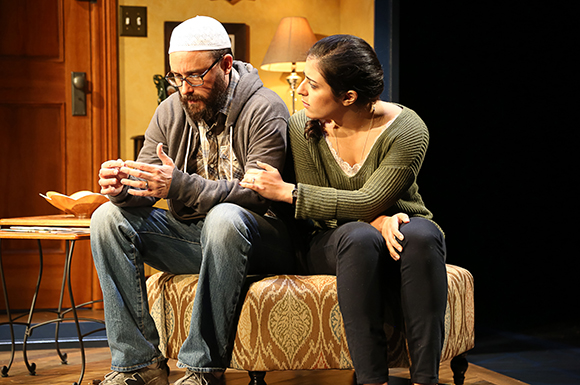 Zarina comforts Eli in light of the issues her novel brings to their lives.

Balancing drama and humor is a delicate art, regardless of what medium you’re talking about. Delivering jokes to an audience in the face of eloquent expression requires a story that’s both identifiable and extraordinary. Though these ideas contradict one another, this doesn’t stop writers from clashing them together in widespread romantic comedies.

The Who & The What effortlessly strikes this balance with a fervent harmony. The story follows a Muslim novelist, Zarina (Nadine Malouf), who is writing about the gender politics of Islamic culture. Zarina’s passion for the topic bleeds through her every interaction on stage, but her modern ideals collide with those of her conservative father (Bernard White).

Pulitzer-prize winning playwright Ayad Akhtar said there is a confounding understanding of Islamic gender politics in America because it is a topic rarely depicted in American plays and literature.

Akhtar was raised a Muslim in Milwaukee, Wisconsin. He explained that there was little encouragement in the Pakistani community to become a writer, and therefore very few voices exist to tell the stories that he has spent the last 25 years creating.

“Young Muslim-American writers I think are starting to get their footing now,” Akhtar said. “I think in the next 20 years you’ll see much more of it.”

Akhtar’s script is brought to life by only four characters: Zarina and her father, Afzal, are joined by her younger sister Mahwish (Tala Ashe) and the white Muslim-convert Eli (Greg Keller). Each character shines on the small three-piece stage set-up, but Afzal best embodies the fierce and funny message of the play: On one hand his performance is light-hearted and sweet, and on the other hand it’s a powerhouse of antagonism.

Afzal resorts to questionable measures to set Zarina up on a date with Eli. As a result their dinner begins rather awkwardly, but as the scene unfolds the visible tension between the two sheds away. The night proves to be more successful than Afzal could have ever imagined. It goes so well, in fact, that Zarina is finally able to break from her proclaimed writer’s block; the inspiration for her controversial novel comes pouring out.

Even though Zarina’s newfound romance fuels her vehemence for writing, the genesis of the relationship, her father, represents the absolute antithesis of the message she hopes to convey. Her journey to find the inspiration she needs is reflective of Akhtar’s own life discovery, which lead to his storytelling career.

“Writing about (the Pakistani) community and those issues – it took me a long time to come to that subject matter,” Akhtar said. “Because for a long time I didn’t think I could do it in a way that would make other people care about what I was writing.”

The Who & The What is obviously a personal story for the playwright. The play grabs audiences and pulls them into a world that might be foreign to them, but for Akhtar and other Muslim audience members, it hits home in a poignant fashion. The Who & The What provides a lovely and at times devastating portrayal about the Muslim-American identity that anyone in the audience, regardless of race or religion, can sympathize with.