The Strokes Nikolai Fraiture and his brother perform at 7 WTC, to benefit autism 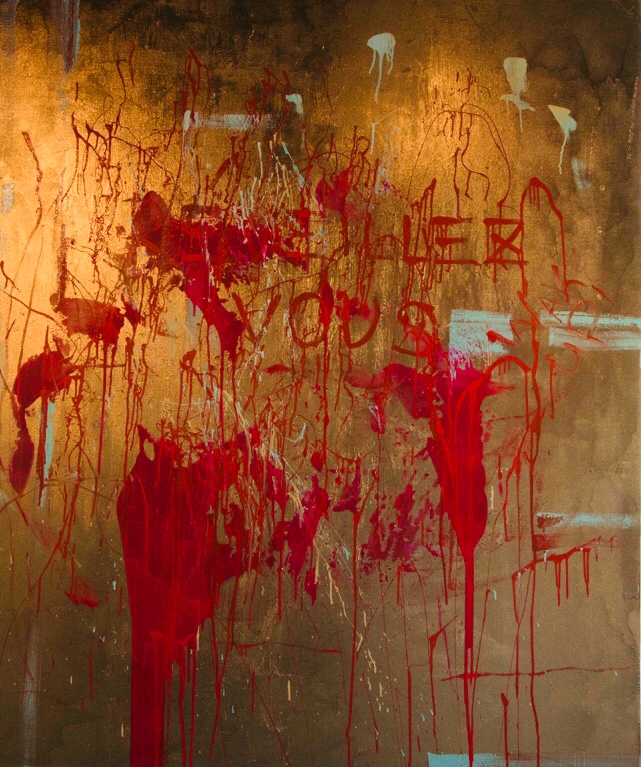 On April 3, Downtown Magazine attended a live art performance by Nikolai Fraiture of The Strokes, and his brother Pierre, a New York City artist. It was a captivating evening.

The cool downtown crowd included leather jackets and cool vibes, and Downtown Magazine friends like Jimmy Webb and David Godlis. That made it a thrilling evening all around.

The evening was the kick off for World Autism Awareness Month benefitting Luv Michael, a non-profit organization that trains, educates and employees individuals with autism. Pierre created a painting with the help of his brother, Nik, on the guitar, as well as performance artists who moved with the music.

DTM Are you still playing with the band The Strokes, and are you touring?

Nikolai, Yes, and yes The Strokes will be touring this summer.

DTM: It’s interesting, you are a musician with the band, The Strokes, and you are an artist. How did this performance come about and how did you get invoiced in raising awareness about autism?

Pierre, I have a very good relationship with the founders of the Luv Michael, and they gave us an opportunity this past summer to create a show individuals who have autism. Luv Michael’s mission is to train individuals with and help them enter the . So we came up with this idea. We were in the countryside actually in a place called Pine Valley which is our family place in Connecticut. My brother starting playing music and I started painting, and it just jelled, we looked at each other and said do you feel what I feel? Nikolai said yes, all of a sudden a week later the foundation was building a kitchen in Tribeca for their foundation space, I created a painting and it sold for $11,000, and we used this money to help benefit the charity.

Nikolai: it was under construction at the time we kind of used all the elements, the contractor, railings into our show making it site-specific performance we used whatever we could. Just like for tonight’s performance we used the backdrop which is amazing, the memorial, the Oculus, all of this has a lot of meaning for us especially being from New York. It means a lot for us.

DTM Is this something you are going to continue to so for other charities or for Luv Michael?

Nik: It’s going pretty well right now, we have a good relationship and down the road we are not sure – we will do it again but wherever we are performing it’s part of the foundation we partner with, it’s part of the whole package.

DTM: And each different show you are going to use the elements and create from that?

Nikolai: Yes, every city and every show had a theme, this one was Awakening.

DTM Do you create the themes?

Nikolai: Yes, the next one will be Prophecy, in whatever city or for whatever foundation we partner with, we will find a gallery or space which we preform in, this is where the creative comes in.

Pierre: What’s great is that we’re brothers and we have been dreaming of doing something like this, these are ideas and thoughts we grew up sharing.

Nikolai: It’s been germinating for a long time.

Pierre: We’re French and American so we grew up with wall to wall French books. So at 8 years old, we were picking up Camus, our parents read a lot so we have all of these philosophical ideas we want to share with others.

DTM Nik, you helped paint this artwork with your guitar. Did you plan that?

Nikolai: No, not really. It was spur of the moment. The last painting also benefited Luv Michael and it sold for 11k. But this painting from tonight is very special, as I helped to paint with my Fender guitar. We have a basic structure of what we were going to do, but I did not know that I would sit down in the audience in an empty seat while playing the guitar, many other things that were not really planned. That’s what we are really excited about, we work with other people and they incorporate their own personality into the performance.

Pierre: We also had the best cast, tonight we had Kim Tehan, Bethany Hughes, Laure Gourlant, and Fatou Sidibe.

Nikolai: We wanted it to recall the days of the 60s happenings. For us, this is what’s really exciting, the spontaneousness of this. For me, especially this is exciting. In my band The Strokes, we play a lot of 3-minute pop music whereas this type of art is really freeform, it’s very exciting and new. I’m excited to do more.

DTM: Where are you from?

Nikolai: We grew up in New York City, on the Upper East Side.

DTM: Do you live in NYC now?

Nikolai: Yes, I live in the West Village.

Pierre: I live on the Upper East Side.

DTM: What do think of this area, and the growth and changes downtown since after 9/11?

Nikolai: I mean personally, think it’s amazing, just to see the regeneration. That’s kinda the reason we were really excited about this site, specifically for this project, it’s a different place it feels completely different. It’s great that Rob Marcucci is down here. In a crazy twist of fate, he worked at a video store with us, our local video store on 84th and York. [Rob Marcucci, a childhood friend of Nik and Pierre, works for Silverstein Properties.]

Pierre: We all delivered videos together.

DTM: Rob, what was it like working with Nikolai and Pierre again?

Robert Marcucci: It was so refreshing. They are such good souls, and the kind of friends one hopes to have. So naturally, we were all on the same page with this project. Very good energy. It was a real highlight for me.

DTM: What do you think of their new live performance art?

RM: I purposely shielded myself from what the final performance would be. Of course I knew of the basic outline, but I wanted to be surprised. It was way different from what I expected. Nick’s music and sound design was experimental, much to my pleasure – and very well conceived for the performance. Pierre had a very interesting take on stage, almost like in a somnambulistic state, yet present. His art slowly formed in the same fashion. It was intriguing to follow. The same went for the accompanying performers. Very dreamlike. At first I was unsure of the individual parts of the piece, but they all seemed to blend, ultimately, forming a warm and sincere feeling.

Nikolai, that’s what’s so great about the energy in this building, there was beautiful energy in that video store many years ago, and now here. I think what Rob has done down here is great. I saw a show that he did here a few years ago, I told Rob when the timing is right, we must do something. I’ve never in my life seen a show like the one Rob put on down here a few years back, it was great.

DTM: Why is this area important to you?

Nikolai: The Strokes vinyl album came out on September 11, 2001. The message for the show tonight was Wake Up, it ties right into having an awareness to what’s important.

Pierre: And also, I think, the guitar… I’m just still trying to process this show tonight, it was great.

DTM: Last word for our readers?

Nikolai: We are going to be doing more of these types of performances it’s going to be international we are hoping to get into galleries, yeah, we are really excited about galleries.

Pierre: You know I’ve been doing art since I was a kid, this it’s kind of a step in for me. I’m planning to officially launch myself in the Fall so I’m looking for all opportunities.

Be sure to follow Nikolai Fraiture and The Strokes, and Pierre Fraiture, to see where they will perform next, it just may be your city!