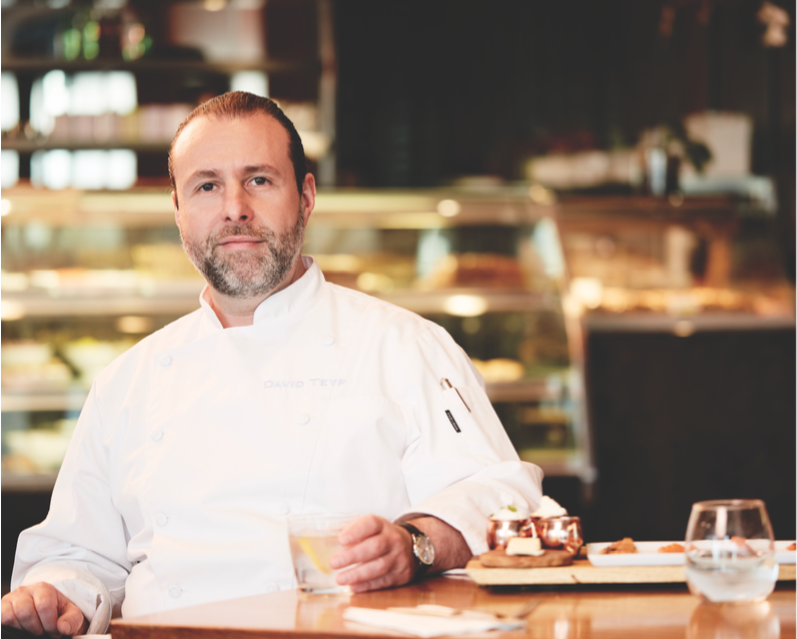 Feeding Tradition, Chef David Teyf’s cuisine combines his heritage with the culinary history of New York. By David Teyf’s hand, even a simple potato latke is a labor-intensive dish. But it’s all part of the chef’s mission to serve meals inspired by his heritage. Dishes are done just as they were in the old days but updated with his own creative air. Potato is hand-grated at the nest setting, and there’s no added our or matzo.

It’s a belief he’s followed since his earliest days in New York’s food scene. Teyf started his career 20 years ago wholesaling hand-rolled, kettle-boiled bagels. These quickly popped up on the menus of the city’s most exclusive dining destinations. Many years later, he sold the business but never lost the appreciation for cooking traditional Jewish dishes in the way of his ancestors. Even the name of his café, Lox, is a nod to that heritage, it’s an homage to how fish was salt cured before refrigeration.

Lox’s location at the Museum of Jewish Heritage is just as influential to the chef as its menu. Teyf’s great-grandfather started a matzo factory in the 1920s that was repeatedly destroyed. Each of his grandparents was the sole family survivors of the Holocaust. “Growing up and listening to these stories and the tears, and my grandmother having numbers tattooed on her hand and now being a part of a museum that focuses on the life and the Jewish movement was so special,” says Teyf.

Each meal at chef David Teyf’s café, Lox, and his bar and restaurant, 2nd Floor at the 2nd Avenue Deli, starts with a complimentary matzo babka bite—a modern twist on a traditional dish.

Teyf was first approached about opening a café at the museum when his catering company, now named Madison & Park Hospitality Group, worked an event at the space.
A boutique kosher caterer. Teyf uses seasonal and locally- sourced ingredients, a style of cooking he learned in Italy. He also trained under Japanese masters, which is what inspired his passion for fish dishes.

Teyf’s catering menus, while planned, are never set and can change up to the day of, just based on daily trips to the markets.

“I always tell my clients just to trust me, because I’m not going to use something if I’m not proud of it,” he says.
“(The clients we work with) have to understand it’s more of a tasting dinner. I’m very picky about the ingredients we use, but clients love the last-minute creativity of something that excites me.” DT loxnyc.com