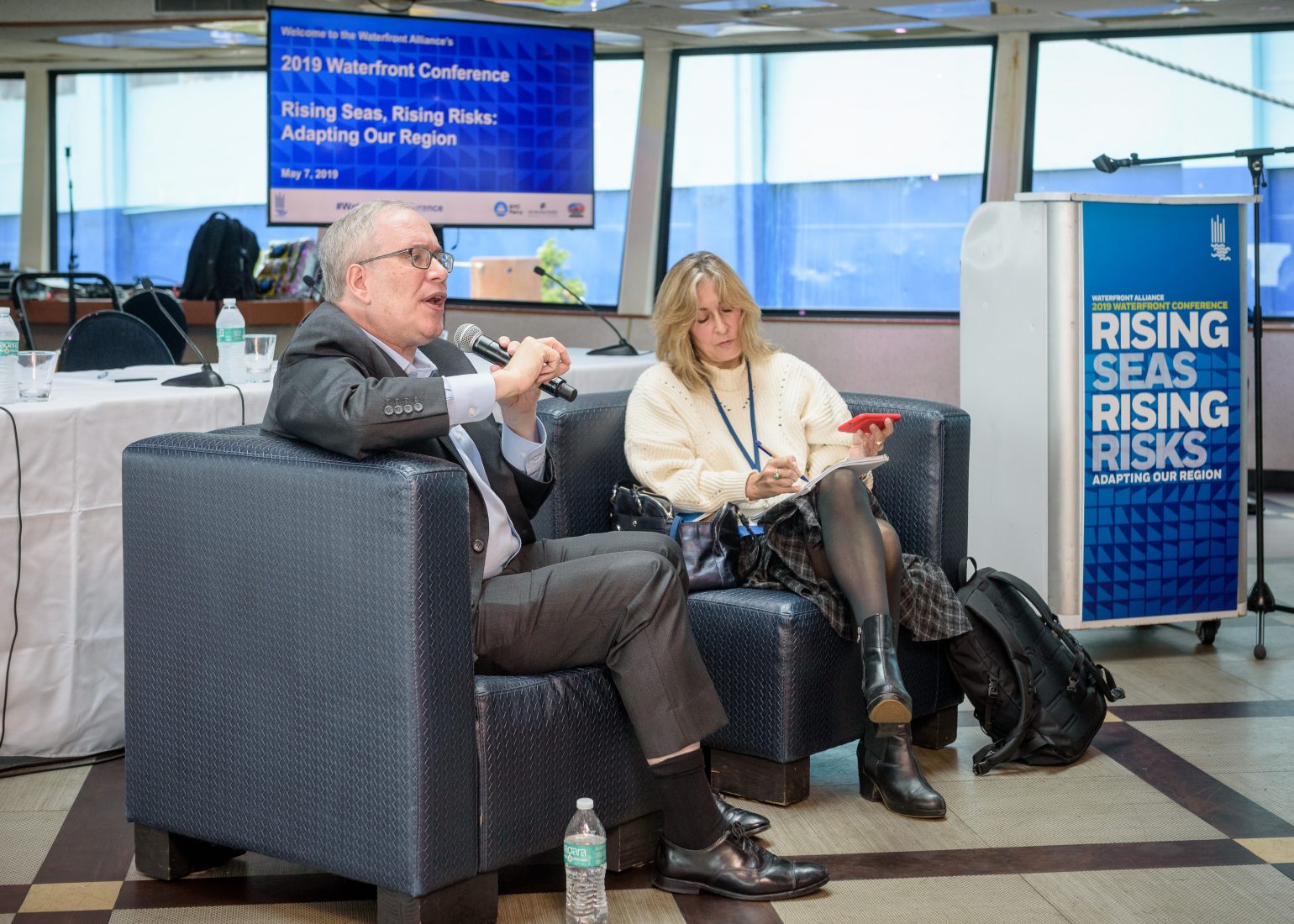 The specter of Hurricane Sandy hung heavy over the 2019 Waterfront Conference, “Rising Seas, Rising Risks.” The Waterfront Alliance hosted the conference on a boat in Hudson River Park, a reminder of what’s at stake for the city. In 50 years, one presenter warned, high tides or lunar cycles could flood the park. By 2100, it could disappear completely. The conference was packed with civil servants, nonprofits, scientists, engineers, and corporate sponsors. Two voices led the way with bold ideas: NYC Council Member Costa Constantinides and City Comptroller Scott Stringer.

Constantinides presented a bill to create a Department of Sustainability for New York City. It would be the first of its kind in the country and would ensure climate change remain a focus through changing administrations. The bill, which he says he will propose soon, would put the DoS in charge of a five-borough “resiliency plan.” The plan would outline how each borough would adapt to and resist the effects of climate change. “The time is not for us to be timid in our goals,” he told his audience, “but to be bold and to move ourselves forward.”

Stringer proposed divesting the city’s pension plan from fossil fuel companies. The city has billions of dollars tied up with some of the worst carbon culprits, and the project could take years. If the plan works, it would pressure energy companies to become greener, something he says the city has failed to do in the past. “None of these energy companies will push to save the planet unless we push them into the ocean,” he said, “Negotiation is over.”

His mission, he says, is part of his duty as comptroller. Green investments are the future. The city will also have to be above water to collect those investments and pay pensions. “If I do not begin a process of divestment and study fossil fuel, I am not doing my job of protecting the retirees of our pension fund.” Time is crucial. He is looking for support. “As a society,” he says, “we have to make a decision now.”

Norwegian Consul General in New York Harriet Berg was in the audience listening. She believes that Norway and New York City face similar challenges when it comes to climate change. They might also find some of the same solutions. While she knows not every politician in America is as motivated about climate change, she says Stringer’s and Constantinides’s ambition gives her hope. “It makes me believe that there’s a political will (to fight climate change).”