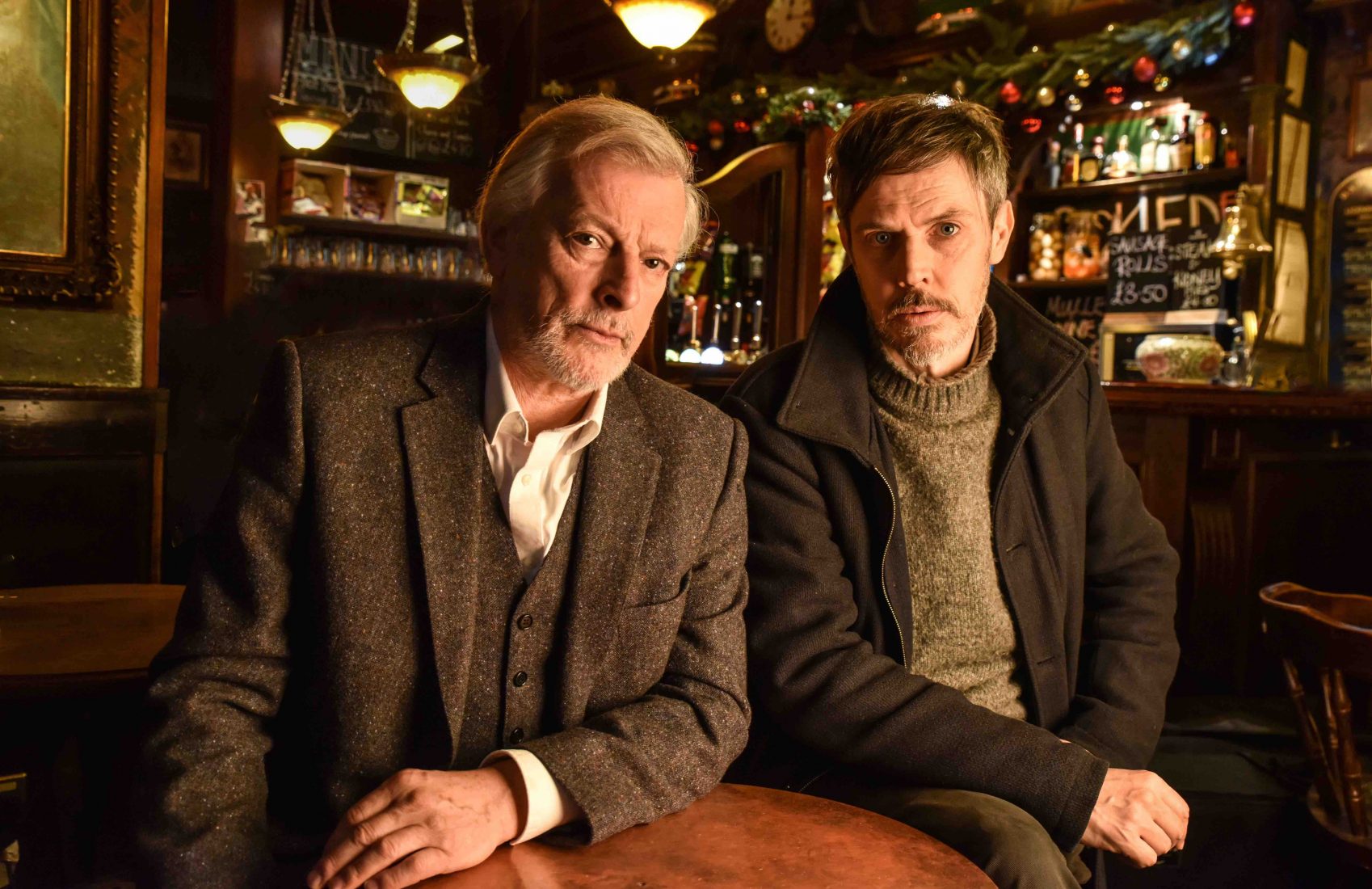 I don’t go to a lot of haunted houses. My “scary movie nights” aren’t that scary. So “Woman In Black – A Ghost Story in a Pub” at the McKittrick Hotel was my first time experiencing the phenomenon of scared laughter–when your throat forces out a laugh to stop you from screaming. It was an odd experience to have at a theater. Even stranger for a two-man show which spends its opening scenes convincing you that it is a friendly comedy.

The McKittrick production of Susan Hill’s bestselling thriller comes from inauspicious origins, commissioned by a provincial English theater to plug a budget hole. The resulting two-man show was a barebones ghost story with the unambitious goal of filling a three-week run around Christmas. Instead, it was a smash hit. It made its way to London’s West End, where it has remained for thirty years. The McKittrick takes advantage of the minimalist requirements of the show–and the pub atmosphere of the McKittrick’s The Club Car–to bring the show back to its humble origins. And they do so to wicked effect.

The original story, by Susan Hill, shows an old man named Mr. Kipps recounting for his family a haunting paranormal experience from his youth. The play reworks the plot by framing it around the relationship between the older Mr. Kipps, who has written his account, and the young acting coach who is helping him prepare to tell it. The opening scenes show Mr. Kipps (David Acton) struggling with the art of performance, urged on by a frustrated young actor (Ben Porter). The actor resolves to play the role of young Mr. Kipps, while giving all of the other roles to Kipps himself. The two build a rapport, and the show refocuses on Kipps’ story itself, bringing more thrills and suspense into the show as it goes on.

In this way, Woman in Black toes the line between hilarious and terrifying. The bond between Kipps and the actor, as well as between Acton and Porter, is charming and heartfelt. You are rooting for this poor old man to gain the courage to tell his story, and then you get it, and it is grand. And then they’ve got you. Like an arm reaching up out of a placid lake, it grabs you and pulls you beneath the surface and into a nightmare. There were screams in the theater. A lot of them. I watched audience members shift in their seats, or cover their eyes. And yes, the scared laughter, which rippled across the theater in between the terrifying punctuations.

Woman in Black is a case study in theater magic made possible in big part due to Acton and Porter. With the exception of the brief intermission, it is the two of them alone who draw the audience’s attention throughout the show. Acton especially flaunts his skill with the manic pace of his character changes, launching from secondary character to secondary character as his Mr. Kipps falls into his role as an actor. Also of note is the effects team, providing just the right lighting, sound effects, and occasional fog to set any scene on a nearly bare stage.

In the mists of the English marshes. Photo courtesy of Jenny Anderson

The Club Car, the McKittrick’s small theater and pub, matches the ambiguous early 20th-century vibe which encompasses many of their other shows. It is a great match for Woman in Black, the flashbacks of which take place at a similar vague period of “60 years ago.” To compensate for the lack of cigarette smoke which would be present at an interwar pub or jazz club, they even have hazers installed, giving your senses another subtle clue that you are somewhere in the past before NYC banned smoking indoors. While you are there, try your hand at some of their Woman in Black-themed mixed drinks, or their new Scottish pub appetizers, from bangers and mash to fish and chips. The “pub platter” makes a great choice for the indecisive, featuring pork pie, scotch egg, stilton, pickles, and nuts. It is delicious.

‘Woman in Black – A Ghost Story in a Pub’ is a thrill and a treat. There is a warning against bringing children under the age of 11, but I suggest everyone else grab a ticket. Grab a drink and a snack–and a stuffed animal if you need one–and experience the performance that had me shaking in the dark in a pub on a Wednesday evening.