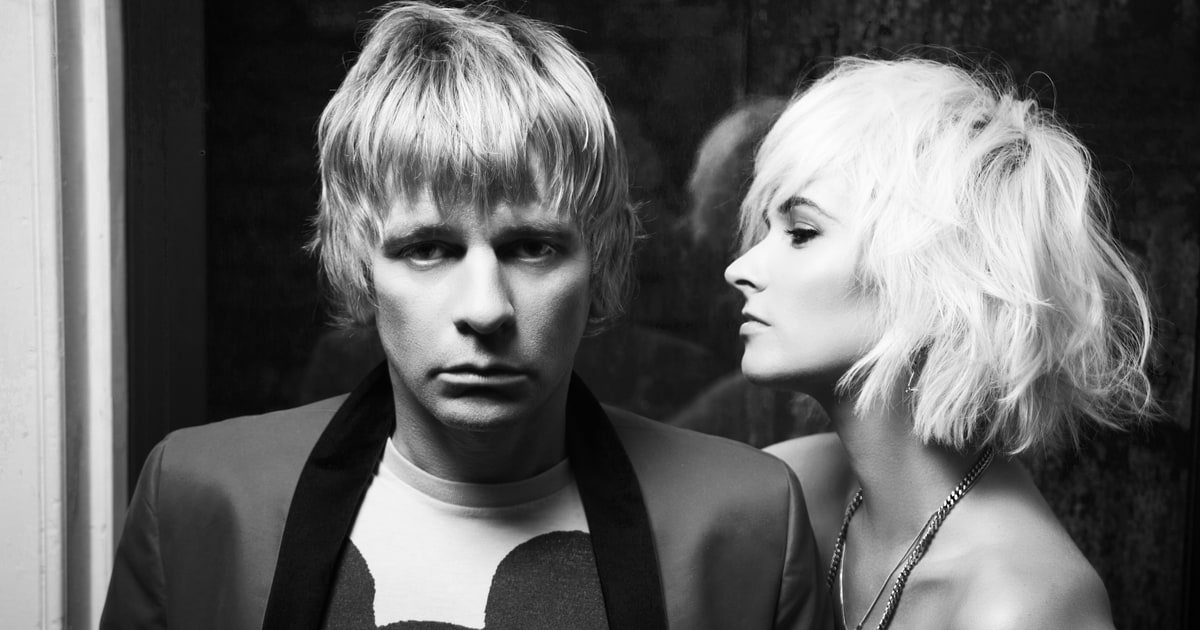 SSHH may be a relatively-new band, but its members — guitarist Zak Starkey and vocalist Sshh Liguz — are not so new to the music scene. Sshh began recording with Zak around a decade ago under the name PENGUINS. Beyond that collaborating with Sshh, Zak has played drums for The Who, Oasis, Paul Weller, Johnny Marr and father Ringo.

Downtown had the pleasure of conducting Q&A with both Zak and Sshh following their October show at New York’s Roxy Hotel. More info on SSHH can be found at www.sshh.co.uk.

Where did the nickname Sshh come from? Was it always spelled that way?

Sshh Liguz: We decided to change the name of the band last year. Zak had always wanted to call the band SSHH, but I fought against it for years. First we were PENGUINS, then PenguinsRising, now its SSHH. We like SSHH the best. We’re also loud AF, so it’s total dichotomy. That’s kinda the point. I got the nickname because I have an amazing ability to not shut up.

How long did Issues take to record?

SL: Recording Issues was a total whirlwind. We were just talking about it the other day, actually. This time last year we hadn’t even started the record — the idea hadn’t even occurred to us! But then everything just fell into place really quickly. We did a few sessions at Sunset Sound in Hollywood, that took about a week, then we flew back to London on the Friday and hit the studio on Monday. We recorded two tracks a day with each band. So in two weeks we recorded 20 tracks! It took about another month or two to master it. It was amazingly-intense.

Do you have a favorite song on Issues?

SL: I find it really difficult to chose just one song as a favorite…All of them! (laughs) Different tracks have different elements that appeal to me. I love “Problems.” It’s really therapeutic to sing — get some aggression out. “Get Up Stand Up” is another big one. “Private Life” is also pretty cool. “Shoot Speed Kill Light” is great, too. We merged two Primal Scream tunes together for it, and it has an almost Bowie-esque guitar vibe. I really like “Back To Black” too. It’s got a kind of psychedelic dub take on it. “Jah War” is super-cool, too. Argh, can’t pick just one!

ZS: “Get Up, Stand Up” — it’s the most powerful lyrically. Sshh really sings it great.

There are lots of great guest appearances on Issues. Were any planned but hadn’t happened?

SL: The great thing about this project is that it can be the gift that keeps giving. We’ve been talking to some people who can’t be named about working together in the future. Never say never!

Zak, you have been part of two of the biggest British bands of all time. Do you have a top accomplishment?

Zak Starkey: Yes, I have a daughter called Tatia.

Folklore goes that Keith Moon taught you how to play the drums. Do you have a lot of memories of Keith?

ZS: I spent a lot of time with Keith when I was young. I used to go and stay at house and play Monopoly. We talked drums but we never sat at a drum kit together. Keith was very encouraging though, and taught me a lot about surfing and girls!

Who had recommended you for The Who gig? Had you been on Pete or Roger’s radar as a drummer?

ZS: I had played in a band with John Entwistle and recorded with Roger in my teens, so they convinced Pete!

What do you remember about the first gig you ever played in New York? Was it the one last month in Manhattan?

ZS: I’m not sure where or when!

SL: I’ve been going to New York City for years, but my first gig in New York City was a couple of years ago. We supported Ride at Williamsburg Music Hall and we played our own show at Santos Party House in Manhattan. We had done a photoshoot earlier in the day and Zak still had this metallic jacket. We had a load of people back to our hotel after the show and everyone had a go wearing this jacket. It was kind of like the mascot of the night. Shits and giggles!

Any musical projects coming up for you beyond promoting the new SSHH album?

SL: Obviously Zak has other gigs going on playing the drums, and I’ve been collaborating with other musicians as well. But we plan on releasing an album of original material.

SL: I started making art when I was a teenager. Using wax as a medium over collage. Painting portraits. I won awards and went to art school in Australia but dropped out to make music — archetypal musician, it’s almost a bloody rite of passage! Anyway, I still make art. Wax will always be a material I love to work with. I’m in the process of putting together a body of work for an exhibit of wax artworks. I also love baaaaaaad tv. Like really shockingly-bad. Theres a show called Sex Sent Me To The ER, which is pretty funny. I’m pretty sure it’s meant to be amusing. Shit. Maybe not. Errrr. I like long walks on the beach…

ZS: I play music all the time. Obviously sometimes I watch TV or go out, but music is where it’s at for me.

SL:I love the wonton soup from Republic. It’s like a hug from a long-lost friend. It’s soooo good. Proper comfort style. The sandwiches at Katz’s Deli are obviously amaze, too. And there’s always Nobu if you’re feeling fancy.

SL: The kids are alright!