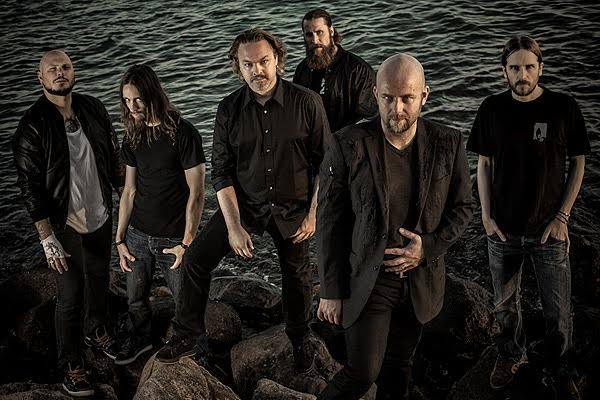 As a melody-oriented music fan, I didn’t grow up on death metal. But when I hear about a band with a 20-year international legacy, my ears tend to perk up. I also pay attention when I find out about bands from Sweden – arguably the world’s best music exporter – touring the States. Thus, when I found about Soilwork coming through town with a show on October 20th at the Gramercy Theatre (alongside Soulfly, Shattered Sun and Decapitated), I immediately submitted an interview request.

Frontman and band co-founder Björn “Speed” Strid kindly answered questions about Soilwork’s soon-to-be-released double album, The Ride Majestic, but also about Swedish bands and what it feels like to tour the States as a Swede. Ultimately, it did not take long to realize that Björn is brilliant and that his two decades with Soilwork have left him full of insight about plenty of topics. With heavy-duty earplugs on-hand, I plan on seeing the band in their preferred element on October 20th.

What do you wish more people knew about Soilwork?

Björn “Speed” Strid: That we are all very interesting characters. Very unpredictable personalities – mostly in a positive way — which I also feel is reflected in our music. Especially in Sweden we’ve always felt that people — especially media — have the impression, that we’re just a bunch of average joes who love catchy choruses and do high fives as soon as we’ve created our next “hit.” There’s so much more than that. There’s a lot of depth in our music and we work a lot with creating different moods. Sounds very pretentious, I know. People are just so quick at yelling “sellout” as soon as you mix metal with catchy melodies. If you listen carefully, you’ll find that there’s so much more than that.

Your latest release, The Ride Majestic, is said to be the first double album in the history of melodic death metal. Was the plan to make it a double album all along? Or did this happen as a result of having so much great material to start with?

B: The idea of creating a double album was planned. The band needed a challenge and needed to showcase each and every member’s songwriting skills in order to strengthen our confidence, especially after one of our main songwriters left the band in 2010. We needed to challenge ourselves in order to find something new, which I believe we did. On our new album The Ride Majestic, which comes out on August 28th, you can hear that we’ve developed our sound even more. It’s very challenging for the listener but also very catchy. It also has a darker and more melancholic feel than [their prior album] The Living Infinite, in general. Coming out of creating a double album into making a “regular” album again seemed easy but it wasn’t. However, you can sense that we’ve put so much effort in the new album and that there’s a lot passion behind it.

What is it about the metal genre that keeps you so interested in it? Was there ever temptation to focus more on your melodies and have more of a radio-friendly sound?

B: Not sure if I would use the word temptation because even though we’ve developed our sound through the years and sounded more straight forward on some albums, with more traditional song structured and mid temp oriented songs, it was still something that we wanted to do at the time. It’s very important for us to develop our sound but also just as important to stay true to our roots. Metal can be very free, which I believed we’ve captured. We have constantly challenged our listeners and ourselves through the years.

When it comes to music from Sweden, many Americans would think of ABBA first and foremost. Some other people think of the more metal-oriented bands like Opeth or Meshuggah. Bands like The Hives, The Hellacopters and Refused have come along to varying degrees of success here, but who are some of the Swedish bands that more Americans ought to know about?

B: Wow, there are a lot of them. Even though Ghost has grown fairly big in the U.S., they’re still worth mentioning. Absolutely incredible songwriting, not just the image and the mysticism surrounding them. There are a lot of great singers and songwriters as well, Erik Hassle and Oskar Linnros, for example. Some of them only sing in Swedish but you should still lend an ear. Another local band named Chronus are a very young and promising band from our hometown of Helsingborg. I haven’t heard such talent from a metal band in years. Still unsigned, though.

For someone who hasn’t seen Soilwork live before, what should they expect from your upcoming New York show at the Gramercy Theater?

B: We are a very energetic live band that always make our shows into a celebration, no matter how dark our music and lyrics are at times. I think we’ve grown a lot as a live band through the years. A tip would be to check out our first live DVD/Blu Ray, Live In The Heart Of Helsinki, that was released a couple of months ago, to get pumped for the show. Our music is very dynamic in general and I think it makes the live experience even better.

Do you remember your first show in New York City? Had you been to Manhattan before coming here as a touring musician?

B: First time was in Brooklyn at a small club in 2002, can’t remember much. We were too excited and too drunk. Before joining this band, I had only been to Germany, Norway and Denmark. Then we get to do our first tour in Japan in 1999, it was surreal. Coming to America – I love the movie (laughs) — was a highlight for sure. It was a dream coming true, for sure. Playing in New York City for the first time was really exciting indeed.

When you are on tour in the United States, what do you miss most about home?

B: When I’m on tour I try to “shut out” home and be in the moment. I really enjoy touring in United States, the only thing I would miss is certain food. I also use to miss “Snus,” which is the tobacco pouches we put under our upper lips, but now you have that too, awesome! (laughs) I do miss my friends and family of course, no matter how hard you try to shut things out, they’re the hardest. United States is such an interesting country in many ways and a lot of unpredictable things usually happen to you when you’re over there. Like being stopped by a highway patrol in the middle of the desert in Arizona at 6 a.m…

What is ahead for Soilwork once your upcoming U.S. fall tour is finished?

B: We’ll have a three-week break after the U.S. tour and we’ll embark on a European headline tour that will take us all the way up to Christmas. The spring will hold a lot of touring for us as well. Looking like it’s gonna be a very busy next 2 years…

Finally, Bjorn, any last words for the kids?

B: See you on tour with Soulfly in October, and whatever you do, do not miss out on our new album, The Ride Majestic, out August 28th!