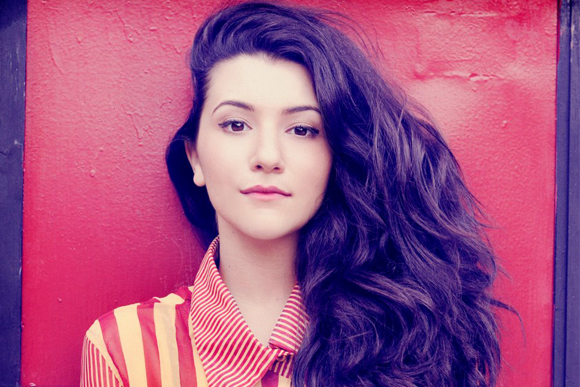 Brooklyn local Alex Winston is a tiny lady. So small, that at certain points during her show at Le Poisson Rouge this past Saturday night, she disappeared completely from my line of sight, lost in the sea of concertgoers.

Her voice is another story. It’s amazing to hear such powerful and controlled sounds come out of such an innocuous-looking person. While Winston’s debut LP from 2012, King Con, successfully showcases her skills as a singer-songwriter, her live performance is a much better measurement of her personality and prowess. (At one point an audience member handed her a pineapple and she held it over her head and said, “what the fuck?”)

The show opened with a few of the catchier tracks on King Con, “Velvet Elvis,” and “Locomotive,” during which Winston excitedly stalked the stage, whipping her long dark hair back out of her face. She also graced the audience with a few new songs in the middle of her set, including “Houdini” and “101 Vultures,” which were recently debuted as a part of The Wild Honey Pies’ “On the Mountain” series.

Winston’s versatility is impressive. At one point in the show, she jumped up on top of the bass drum to sing the bright pop tune “Medicine,” a highlight of the evening, especially because it ensured her visibility for the entire crowd. But during the encore she stood somberly in the center of the stage with her acoustic guitar for the vulnerable “Don’t Care About Anything,” accompanied by a lone violin.

The best kind of indie pop manages to sound sweet and catchy, while remaining gritty and honest, and Winston achieves exactly that. Her energy is palpable when live, and her spirit is both fun and flippant. Go see her this summer if you get the chance—so you can say you knew her before she was big.