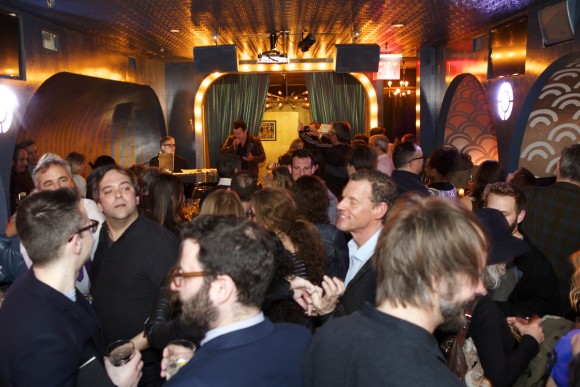 A week ago, when my friend Mark asked when we were going to Sid Gold’s Request Room (165 West 26th Street), I did not know what he was talking about.

After a few minutes of searching the web, I learned a number of facts that made this a must-visit establishment:

Joe McGinty took the time to do some Q&A about the piano bar, which just opened this month. It is open between 5:00 p.m. and 2:00 a.m. seven days a week, although as Joe notes below, the vibe changes a bit around 9:00 p.m. each evening.

Downtown Magazine’s Darren Paltrowitz: Where did the idea for Sid Gold’s Request Room come from?

Sid Gold’s Request Room’s Joe McGinty: It was always a dream of mine to have my own piano bar. Luckily, Paul Devitt [of the Beauty Bar] shared the same dream. He approached me in the fall of 2013 about partnering up to open a piano bar, and of course I enthusiastically said yes. And that’s when it all began. A year and a half later, Sid Gold’s Request Room is now open for business!

How would you describe Sid Gold’s Request Room to someone who has not yet been there?

J: Sid Gold’s features a retro “deco” vibe, where one can sit and enjoy some cocktail piano in the earlier part of the evening, or join in with the piano sing-alongs that occur every night at 9:00 PM.

How did Sid Gold first react when finding out about this venue?

J: Sid Gold is very excited. He’s a showbiz vet and has already stopped in to sing some showtunes!

What is the most surprising thing that you have learned so far in co-owning a club?

J: The amount of work involved, and the amount of things that can go awry. Though I’ve been playing in clubs for years, I never realized all of the things that go on behind the scenes to open a bar and to keep it running. Paul Devitt is a master at all this.

Are there any plans for the Request Room to expand into a proper venue for touring artists, beyond being a piano bar?

J: We would love for the Request Room to be a go-to spot for touring artists to do intimate shows. Or for their after-parties. We recently hosted an after-party for The Damnwells after their Irving Plaza show, and it was great fun!

What’s your favorite thing on the menu?

J: It’s hard to pick! There’s so much good stuff. I have to say, the Veggie Pigs In A Blanket are kind of amazing, and there’s something special about the French Fries. The Steak Tartare is also a favorite.