Sean Yseult on new White Zombie box set “It Came From N.Y.C.,” her next NYC exhibition, studying at The New School, and more 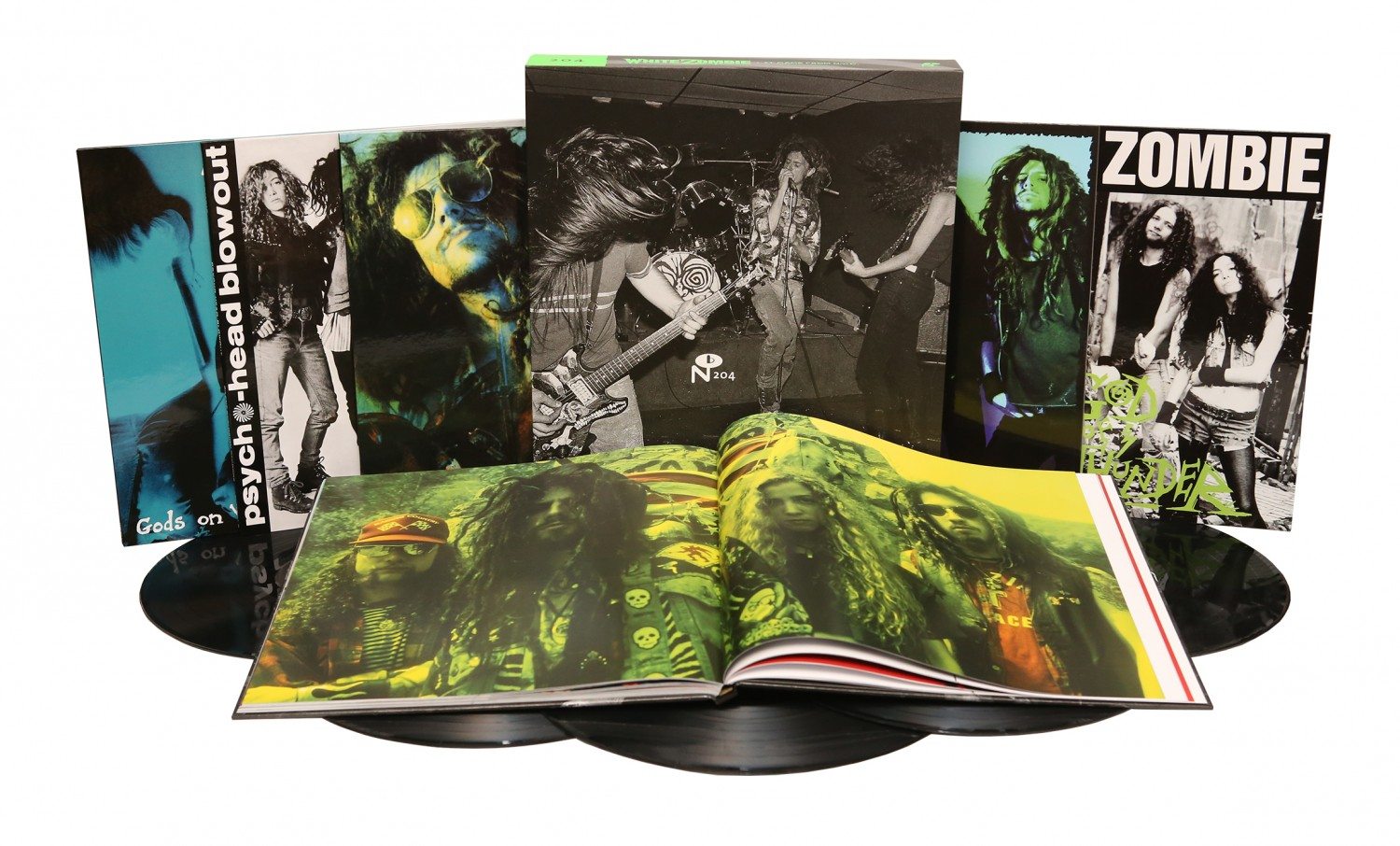 With mega-hits like “More Human Than Human” and “Thunderkiss ’65,” White Zombie was one of the definitive hard rock bands of the 1990s. But one thing that many fans of White Zombie do not realize is that the band had formed in 1985, and had released some albums independently before signing with Geffen Records. June 2016 has brought the release of It Came From N.Y.C., a deluxe box set via The Numero Group that includes five LPs of remastered White Zombie’s early releases plus a 108-page book full of anecdotes and previously-unreleased photos. The book within the box set also includes an extensive essay by Pitchfork contributor Grayson Currin. A condensed version of the set with three CDs — rather than five records — exists for diehards that do not have a preference for vinyl.

In the 18 years since White Zombie disbanded, all of its key members remain busy with interesting projects. Beyond his successful solo career, frontman Rob Zombie directors movies and commercials. Guitar Jay “J.” Yuenger produces music, while also having become in-demand for sound design and audio restoration; he did the mastering for this new box set. Bassist Sean Yseult still plays in bands, but is more focused on her art career, which is tied into her own Yseult Designs.

Sean — who attended The New School for undergraduate studies and keeps a home in New York City — did some Q&A with Downtown about It Came From N.Y.C. and plenty more. She had previously tied together the old and the new with her excellent 2010 book I’m In The Band. Later this month, she has art exhibiting at the Hamptons Art Fair, which runs from June 23 to 26. In October, she has a proper exhibition scheduled at Art On A Gallery.

The early days of White Zombie – Photo by Scott Smith

Your new box set is titled It Came From N.Y.C. — was that the only title on the table?

Sean Yseult: No, I suggested, The Corpses Rise!, in retort to our crappy box set that came out a while back, Let Sleeping Corpses Lie. There were more, but this one stuck.

You’re based in New Orleans nowadays. What do you miss about living in New York City?

SY: Well, I don’t have to miss New York because I have a place there and go back and forth! I still love New York City. I love New Orleans too, though. When I’m in New Orleans, I miss the architecture, museums, restaurants, and pace of New York City. One thing I really miss is the immediacy and efficiency of New York, which is sorely-lacking in New Orleans. My gallery director in New York got one of my lightboxes rewired in half an hour –- I’ve tried to get that done in New Orleans for years, no joke!

You had an exhibit last year at Sacred Gallery. Any chance of another exhibit in New York in the near-future?

SY: Yes, I actually have a piece in the Hamptons Art Fair at the end of this month, and just agreed to a solo show at Art On A Gallery opening Thursday, October 27th and showing for one month!

Did you have a favorite venue to play in New York?

SY: I like the Bowery Ballroom and the Mercury Lounge. Those are clubs I have played and go to for seeing bands.

What was the most difficult part of putting together this box set? Was it locating source files? Or designing the booklet?

SY: Digging through all of my boxes of White Zombie ephemera –- again! I already did this back in 2010 for my book I’m In The Band, so it was tedious having to do it all over again, but not give the label too much repeat material!

How did you wind up with the opportunity to re-release these albums? Did the rights revert back to you, Rob and J.?

SY: Rob and I always had the rights to most of the material — we put it out on our own label! There are two records we recorded for Caroline Records, and those did revert back to us years ago.

Do you have a favorite recorded moment within It Came From N.Y.C.?

SY: There are some songs and riffs and overdubs on Soul-Crusher that make me laugh. Just remembering coming up with them, and what we had in mind…Remembering Rob late at night holding up a 70’s cassette recorder up to the television to record blips of dialogue from B-movies –- the caveman days of sampling!

It’s been made very clear that there will not be a White Zombie reunion at any point in the near-future, but do you see yourself playing any of White Zombie’s music live at any point? Or collaborating with J. in any way?

SY: No, Rob has said it a hundred times, and the feeling is pretty mutual I suppose. I’d be willing if the others were, but there would have to be a lot of actual communication first, which Rob is very opposed to. He does seem to enjoy playing White Zombie covers quite often, though, so he can’t hate what we did and the music we wrote entirely.

Did putting together the box set make you nostalgic in any way for the early days of White Zombie?

SY: Like I said, I had already been down this road a few years ago putting my book together — it’s mostly photos and a scrapbook of my days in White Zombie — so no, the nostalgia was not dragged up for me this time. But I do have many great memories, which is why I did the book.

I don’t think that anyone can dispute that White Zombie was one of the most original and innovative bands in the history of hard rock or metal. For starters, the band incorporated samples, hip-hop, and techno elements before anyone else that I can think of. Do you recall the first time you ever heard a band and could clearly identify the influence from White Zombie? Or at least the first time you heard a White Zombie cover?

SY: Yes, on the road, opening bands would pop up wearing tons of patches, dreads and tattoos and making some hellish noise — as we did! It was fun and flattering, really. We got to be friends with a lot of these bands. We weren’t their only influence, of course. Remember, Ministry and all kind of cool freaks were making some good noise back then!

What’s coming up for Yseult Designs?

SY: Wallpaper! I have been working on it for a while and hope to unveil a few designs in the near future!

Do you have any plans for a second book? Or did I’m In The Band get everything out of your system that you’d wanted to say?

SY: That book started out as a coffee table photo book; somewhere to put all of the photos and odd things I had collected during our 11 years. But the publishers kept asking me to write more and more, and it evolved into some kind of scrapbook with commentary. I do enjoy writing, though. Who knows?

Finally, what do you wish more people knew about Sean Yseult?

SY: I was a design student and photographer when we started White Zombie, and after 11 years on the road, I am back to doing both. I have a solo show up in L.A. right now, and I am curating a show of fellow musician/photographers to open this September at Heron Arts, San Francisco. I’m also getting back into composing and working on soundtracks, which I love.